The surge of popular support for Vermont Senator Bernie Sanders, now the clear front-runner for the Democratic presidential nomination, has touched off frantic retaliation by the Democratic Party establishment and the corporate media.

While Sanders himself is a known quantity in capitalist politics, with a 30-year career as a loyal supporter of the Democratic Party and American imperialism, there is consternation in the ruling class over the shift to the left among workers and young people that underlies the strength of his campaign. 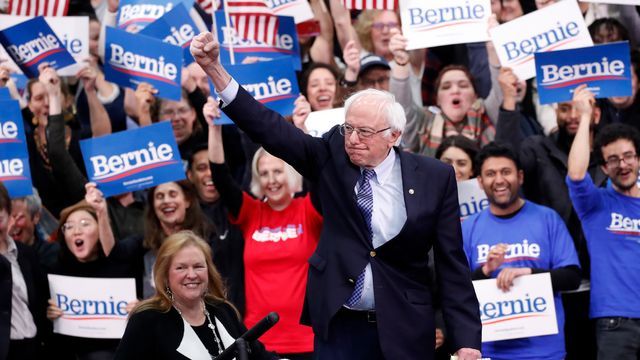 Sanders won the most votes in both the February 3 Iowa caucuses and the February 11 New Hampshire primary. He has taken a wide lead in polls of prospective Democratic primary voters both nationally and in many of the states scheduled to vote over the next month, which will select two-thirds of the delegates to the Democratic National Convention.

A Morning Consult poll published Thursday found Sanders with a double-digit lead among likely Democratic voters nationwide. Sanders was at 29 percent, followed by former Vice President Joe Biden at 19 percent and the billionaire former mayor of New York City, Michael Bloomberg, at 18 percent. Former South Bend, Indiana Mayor Pete Buttigieg, who finished second in both Iowa and New Hampshire, was in fourth place nationally at 11 percent. Senator Elizabeth Warren of Massachusetts was at 10 percent, while Senator Amy Klobuchar of Minnesota was at 5 percent.

The support for Sanders reflects shifts to the left in the working class and among young people. Exit polls in New Hampshire showed Sanders leading by a wide margin among working-class voters, both those with incomes below $50,000 a year, and those without a college education. He had 51 percent support among young people under 30, compared to 4 percent each for Klobuchar and Biden.

Nationally, half of US college students support Sanders, according to a poll from Chegg/College Pulse, which surveyed 1,500 full and part-time students attending both four-year and two-year colleges. The students named climate change and income inequality as their top issues. Warren came far back in second at 18 percent.

The widening support for Sanders, along with the apparent demise of Biden’s campaign, after a fourth-place finish in Iowa and fifth place in New Hampshire, has provoked angry denunciations of the Vermont senator from the Democratic Party establishment and the corporate media.

The Biden campaign led the way, with its campaign co-chairman, Representative Cedric Richmond of Louisiana, telling a conference call with reporters that there would be “down-ballot carnage” for the Democrats if Sanders won the nomination. “If Bernie Sanders were atop of the ticket, we would be in jeopardy of losing the House, we would not win the Senate back,” he said.

Two right-wing Democrats in the Senate openly denounced Sanders for his claim to be a democratic socialist. Senator Doug Jones of Alabama said, “I don’t agree with the socialism label.” Senator Joe Manchin of West Virginia said, “If Bernie ends up being one of these frontrunners, he’ll have to moderate. I’m not going socialist. Never been a socialist.”

Campaign consultant James Carville, a fixture in Democratic politics for three decades, was more vituperative, making repeated television appearances this week to denounce Sanders as an easy target for the Republican right, and at one point directly echoing Trump in calling Sanders a “communist.”

The corporate media was filled with anti-Sanders commentary, ranging from laments (Nicholas Kristof in the New York Times), to cynical sneers (Paul Krugman in the Times) to outright denunciations (Chuck Todd on MSNBC).

Krugman’s column, under the headline, “Bernie Sanders Isn’t a Socialist,” makes the correct observation that “Bernie Sanders isn’t actually a socialist in any normal sense of the term. He doesn’t want to nationalize our major industries and replace markets with central planning,” and suggests that Sanders would be better described as a European-style social democrat.

The column goes on to echo the warnings of the Democratic establishment that if Sanders is nominated, Trump would win an easy victory, concluding “I do wish that Sanders weren’t so determined to make himself an easy target for right-wing smears.” Krugman says nothing about the fact that the “right-wing smears” have already begun from the Democrats.

As for Todd, during MSNBC’s coverage of the New Hampshire primary Tuesday, he quoted from a diatribe against Sanders by Jonathan Last of Bulwark, who wrote: “No other candidate has anything like this digital brownshirt brigade. I mean, except for Donald Trump. The question no one is asking is this, what if you can’t win the presidency without an online mob?”

This comparison of supporters of Sanders—who is Jewish—with the fascist thugs of Hitler and Mussolini is typical of the smear tactics by the corporate media against anyone who criticizes the super-rich. Todd’s commentary was reposted by the Sanders campaign, where it was viewed nearly a million times, no doubt adding to Sanders’ support.

The consternation over Sanders’ rise in the polls has already led to calls for the consolidation of the “moderate” (i.e., openly right-wing) forces in the Democratic Party against him. A focal point of these appeals is billionaire Michael Bloomberg, who entered the race for the nomination in November and will be on the ballot for the first time in the March 3 Super Tuesday states.

Bloomberg has poured $100 million into advertising just in those 14 states, a major part of the $300 million he has already invested in winning the Democratic nomination. His campaign has rolled out endorsements from congressmen and local government officials, particularly mayors of cities where Bloomberg has long used his gargantuan fortune to buy influence.

Rather than risk a four-way split among Biden, Bloomberg, Buttigieg and Klobuchar, to Sanders’ advantage, there have been multiple suggestions in the media of various combinations—a Bloomberg-Klobuchar tie-up, for example.

More likely than an open alliance is a splintering of the delegates among five or six candidates, that would preclude any one candidate gaining an absolute majority, leading to a brokered convention in which the various right-wing candidates would combine to block a Sanders’ nomination.

Sanders directly addressed this possibility in an appearance on MSNBC. “The convention would have to explain to the American people, 'Hey, candidate X got the most votes and won the most delegates at the primary process, but we're not going to give him or her the nomination,'” he told host Chris Hayes. “I think that would be a divisive moment for the Democratic Party.”

While his opponents are implacably determined to prevent his nomination, Sanders himself has repeatedly reiterated his determination to support whoever the convention chooses and oppose at all costs any break by his supporters from the Democratic Party.

At his campaign rallies, Sanders makes a rhetorical appeal to opposition to social inequality and war. However, he is also making a case to the political establishment that he can be trusted to defend the interests of the ruling class.

In a recent interview with the New York Times, Sanders said that he would consider using military force in a preemptive war against Iran or North Korea. He also fully endorsed the anti-Russia campaign of the Democratic Party, agreeing that it should be considered “an adversary, or even an enemy” if it continues on its current course in Ukraine.