Humboldt University President Sabine Kunst gave her full backing to right-wing extremist professor Jörg Baberowski at an academic senate meeting on Tuesday. This followed a series of vulgar threats and a physical assault by Baberowski against a left-wing student. The academic senate is the university’s highest governing body, representing professors, academic staff, other employees and students.

Baberowski tore down election placards for the International Youth and Students for Social Equality (IYSSE) from a blackboard. When he noticed that Sven Wurm, a deputy for the IYSSE in the student parliament, was filming his actions, he lashed out, threatening him with the words, “Should I smack you in the face?” All of this was documented in a video, which was submitted to university management, together with an official disciplinary complaint last week. 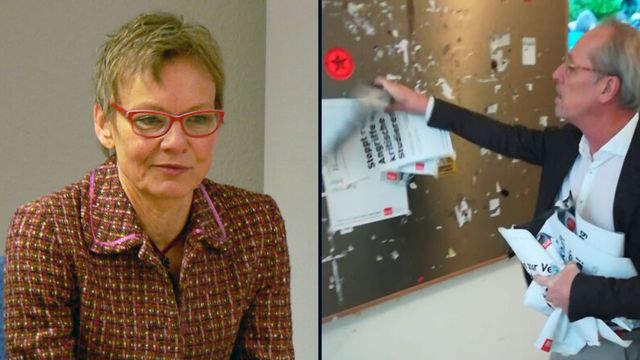 In the section of the meeting closed to the public, Kunst declared that university management would not publicly condemn the violent attack. There will merely be an official inquiry, the purpose of which Kunst failed to clarify. Several members of the academic senate told the WSWS independently that Kunst went so far as to describe Baberowski’s actions as an understandable human response.

With this declaration of sympathy and her refusal to clearly condemn the attack, Kunst has provided violent right-wing extremists with a blank cheque to intimidate and attack their political opponents at the university. Any student who criticises right-wing extremist positions, or engages in the student parliament, must expect to face such attacks.

Baberowski’s physical assault of a left-wing student, and his intervention in the election campaign, were not part of a spontaneous reaction, but arise directly from his far-right ideology. The professor for Eastern European history is a central figure within Germany’s far-right. In 2015, he founded the “Baberowski Salon” (Die Zeit), at which everyone with a standing in the New Right milieu meets at least twice a year.

As recently as January this year, Baberowski repeated the primary lie of all Holocaust deniers, telling the Frankfurter Allgemeine Zeitung (FAZ) newspaper that Hitler “did not want to know anything about Auschwitz.” This was an attempt to justify his previous statement that Hitler was “not vicious.”

At the same time, Baberowski regularly agitates in the print and broadcast media against refugees and in favor of brutal wars. With Baberowski, as Law Professor Andreas Fischer-Lescano put it in the Frankfurter Rundschau, his “scholarly oeuvre blends with comments on daily politics into an amalgam of right-wing extremist criticism.”

University management bears responsibility for the fact that such a Nazi apologist and right-wing extremist can not only teach at Humboldt University, but also tear down student placards and assault students with different views with impunity. Humboldt University management not only defended Baberowski’s latest act of violence, but has unconditionally backed him against any criticism for years, defending his right-wing tirades.

This has taken place under conditions where the professor has repeatedly threatened his political opponents. Three years ago, Baberowski insulted Wurm during an official lecture as a “red-coated fascist” and a “repugnant denunciator.” He also accused university management of being “cowardly” because it “let these criminals get away with whatever they like,” instead of just “denying them entry to the lecture theatre” or “issuing a campus-wide ban.”

The IYSSE made a detailed report to the university management about this incident. Instead of answering the letter, however, Kunst published an official statement that described Baberowski as an “outstanding scholar” and “not a right-wing extremist.” She declared “attacks in the media” on him to be “unacceptable.”

With this blank cheque in hand, Baberowski began insulting and threatening his colleagues. He attacked professors at Humboldt University, for example, for refusing to support the anti-refugee “Statement 2018” by Wilhelm Hopf. He insulted the academics as “denunciators,” who were “smug professors who have never uttered a critical word in their lives.”

Last year, two students from other lists in the student parliament filed a lawsuit and a disciplinary complaint against Baberowski because he attacked them as “left-wing extremist fanatics” and “incredibly stupid.” The reason for this particular outburst was that the pair had expressed detailed criticisms of Baberowski’s proposed centre for research into dictatorships. University management extended its explicit backing to Baberowski and to former Social Democratic government minister Kunst, who repeatedly encouraged Baberowski, and reaffirmed its statement from three years earlier.

Representatives of all parties in the federal parliament and the federal government have declared their support for Baberowski in the past and denounced any criticism of him as a “campaign of character assassination.” The majority of the media has also joined in this campaign against the IYSSE, including Der Spiegel, the FAZ, and Die Welt.

Last Wednesday evening, the Christian Democratic-aligned Konrad Adenauer Foundation organised an event in Berlin on “freedom of scholarship,” introduced by the head of the Association of University Lecturers, Bernhard Kempen, and federal Education Minister Anja Karliczek. Among the announced participants was Jörg Baberowski, speaking on the subject of “universities as places of social discourse.”

Baberowski has also been invited to speak on May 4, alongside Peter Tauber, state secretary of the Defence Ministry, at the Association of Memorials in Saxony’s official commemoration of the 75th anniversary of the end of World War II.

The case of Baberowski is symptomatic of the current political situation in Germany. Although they are widely despised among the population, right-wing extremists can act, ever more aggressively because they are being built up and supported from above. The Christian Democratic Union (CDU) and Free Democrats recently formed an alliance with the far-right Alternative for Germany in the state of Thuringia to create the first governing majority involving a fascist party since the end of World War II.

But opposition to this state of affairs is immense. The video of Baberowski’s violent outburst went viral after just a few hours and has been viewed almost 20,000 times. Several student groups and councils, as well as hundreds of individuals, have posted comments on social media condemning the attack and demanding that it must have consequences.