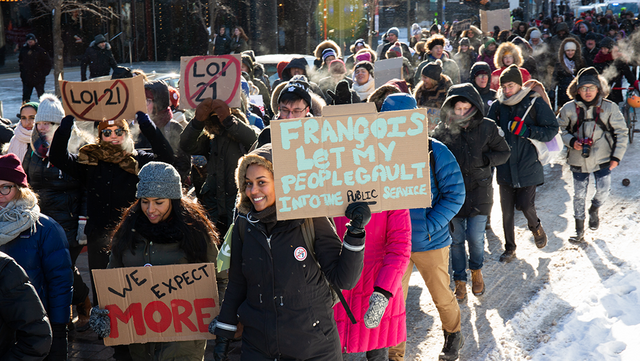 Students braved frigid temperatures to voice their oppostion to Bill 21

On the first protest day, some 300 demonstrators heard speeches from students opposed to the “secularism” law, and marched to the Quebec Ministry of Immigration, Francisation and Integration. According to the organizers, the protest’s purpose was to demand that the government withdraw its “secularism” law in its entirety, and to press the province's university administrations to take a "hardline" stand against the chauvinist law.

Bill 21 is the outcome of a longstanding campaign, spearheaded by the most chauvinistic sections of Quebec's ruling elite and the media, a campaign in which the entire political establishment, including the pseudo-left pro-Quebec independence Québec Solidaire and union bureaucracy, has been complicit. This campaign was launched in 2007 by the tabloids of the Quebecor media empire and the Action démocratique du Québec (ADQ), the predecessor of the Coalition Avenir Québec (CAQ). They railed against the “excessive” accommodations purportedly granted religious minorities and the threat they represent for “Quebec culture.”

Bill 21 prohibits the wearing of "religious symbols" by many other state employees, in addition to teachers, in so-called "positions of authority." It also incorporates the main measure of the previous Liberal government's Bill 62, which reduced Muslim women wearing the full veil (niqab or burqa) to pariah status by prohibiting them from receiving or giving public services (health care, public school, public transportation, etc.).

The claims of the CAQ and the Quebec political establishment as a whole that Bill 21 is aimed at affirming the secular character of the state are a cynical and hypocritical cover for discriminatory legislation that stigmatizes immigrants and religious minorities, especially Muslims. In the name of safeguarding Quebec's "cultural heritage,” Quebec’s “secularism” law gives all manner of exemptions to the display of Catholic symbols in state institutions.

The antidemocratic character of the law is further demonstrated by the CAQ’s invocation of the “notwithstanding clause,” which shields the law from any constitutional challenge, although it manifestly violates fundamental rights recognized by the Canadian and Quebec Charter of Human Rights.

The turn of the Quebec’s ruling elite towards chauvinist and xenophobic policies is part of an international trend in which policies historically associated with the extreme right are being “normalized.” The CAQ’s measures are of a kind with the Ford Conservative government's attacks on refugees in Ontario, Trump’s anti-immigrant witch hunt, and the European Union’s closing of its borders to migrants fleeing war.

As in the 1930s, the capitalist elite is vomiting up chauvinist reaction with the aim of scapegoating immigrants and minorities for the deepening economic and social crisis and splitting the working class.

Passed into law last June, Bill 21’s perverse impact has already been felt by students and workers. In an interview with CTV News, Amrit Kaur, a turban-wearing Sikh teacher who was born and has taught in Quebec, explained that she had to leave the province for British Columbia to find work in her chosen profession. Expressing how thousands of workers feel, Kaur said, “I am treated like a second-class person simply because I have beliefs, and I want to express myself visually.” She went on to point out that “the bill contributes to the labour shortage [in education] because there are people like me who are qualified to teach but cannot because of institutionalized racism.”

The stand in defence of democratic rights taken by the trainee teachers who led last month’s student protest against Bill 21 contrasts sharply with the response from the trade union bureaucracy. Together with their political allies in the big-business Parti Québécois and Québec Solidaire, the unions have always characterized the debate on “reasonable accommodation” and the so-called secularism of the state as “legitimate,” not a reactionary campaign trumped up by the nationalist and chauvinist right.

The unions are aware that Bill 21 is unpopular among their members. But they refuse to denounce it as a blatant attack on democratic rights or mount any campaign against it. 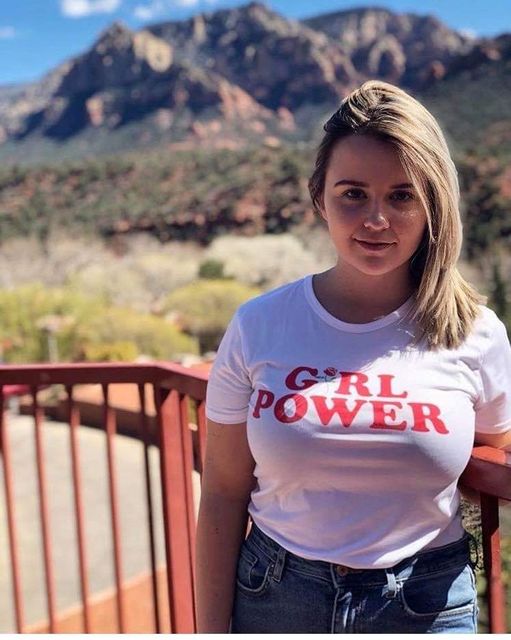 Courtney (CM): For myself, I’m studying to be a teacher, and it’s directly affecting a lot of our peers. They are being told that they have to make a decision between their religion, their practices, something that is really fundamental to their identity, and the career they are passionate about. And beyond even the career implications, [Bill 21] really does tell every minority group in Quebec that they don’t belong here. That they are different from the others, that they are not wanted here, and, if they do stay, they should be less visible. We find that to be a very troubling message, not something that we are willing to let pass. It is something that we are absolutely going to continue to fight.

Bill 21 is far from secularism. It is very targeted towards certain groups of people, and if we are going to talk about secularism, let’s talk about the fact that crosses are still displayed in Quebec schools or that half of our streets are named after Catholic saints, and all the other Christian religious symbols that are present throughout Quebec. If we want to talk about secularism, these things should be our first focus.

WSWS: Do you have any idea of the number of people affected at McGill or at least in your faculty?

CM: I have no exact statistics at this point. But there are a number of people in the faculty who do wear religious symbols. There are a lot within the faculty who wear hijabs and there are quite a few who wear a variety of other veils as well. They plan to teach in Quebec, but they are realizing that they won’t be able to unless they are willing to give up that part of who they are. And we don’t feel they should have to make that choice.

WSWS: What was the response from students to your call for a strike?

The motion passed with 95 percent support. A lot of students participated, either by joining us on the picket line or at least by not attending classes. And a lot of teachers sent emails to students saying they would not be penalized if they chose to participate in the strike.

WSWS: What was the response from the university administrations?

CM: Universities tend to avoid taking political positions. But when we look at such an important issue, it is important that such institutions with a lot of power take a stand on the correct side and stand up for their students’ rights. But that’s just not what we’re seeing right now.

WSWS: The WSWS fights for the understanding that the anti-immigrant policies being adopted by the CAQ, Trump, and other governments represent a conscious effort by the ruling elite to divide the working class on ethnic lines and divert attention and anger away from its program of austerity, rearmament and war. Do you have any thoughts on this?

CM: Definitely. We see a huge swing to the right at this time. The implications and damages of such policies could definitely be permanent, and this is why we are fighting them with everything that we have. It is a pattern seen throughout history—this idea of scapegoating problems onto minority groups. We are not willing to repeat history. We do worry that the CAQ will expand Bill 21 to cover other areas of the public sector. If you’re going to invoke the non-standing clause to do this, what’s stopping you from doing it to impose anything else?