Polls indicate that Vermont Senator Bernie Sanders is increasing his lead in the race for the Democratic presidential nomination. A nationwide poll of Democratic voters released Tuesday by National Public Radio, PBS NewsHour and Marist University showed Sanders increasing his support to 31 percent, a rise of nine points since the last poll in December. He holds a double-digit lead over his nearest rival. 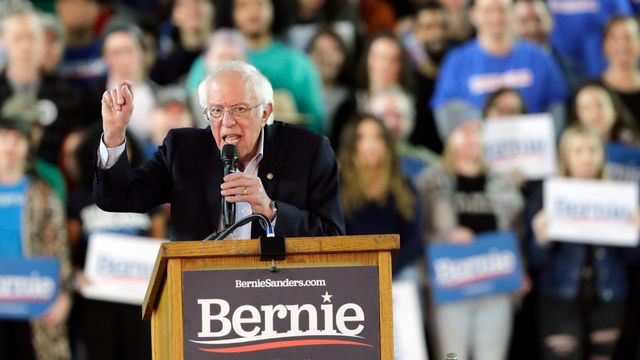 Other polls show him winning this Saturday’s Nevada caucuses with 35 percent of the vote. The NPR/Marist poll, moreover, shows Sanders with broad support across many demographics. Besides leading among those under 45, among city voters and those without college degrees, he also leads among women, college graduates and both suburban and rural residents. He comes in second to former Vice President Joe Biden among black voters, within the margin of error.

In recent days, Sanders has held rallies that attracted thousands of supporters, including a turnout of 17,000 in Tacoma, Washington; 6,000 in Richmond, California; 11,000 in Denver, Colorado and over 5,000 in Mesquite, Texas.

The poll showed Michael Bloomberg, the billionaire former mayor of New York, who has thus far spent $418 million on campaign ads, rising 15 points to 19 percent, supplanting former Vice President Joe Biden in second place. Bloomberg is skipping the first four primary contests and using his estimated $60 billion fortune to blanket the airwaves with ads before he competes in the March 3 “Super Tuesday” contests in 14 states, which will award two-thirds of the 1,990 delegates needed to win the nomination. 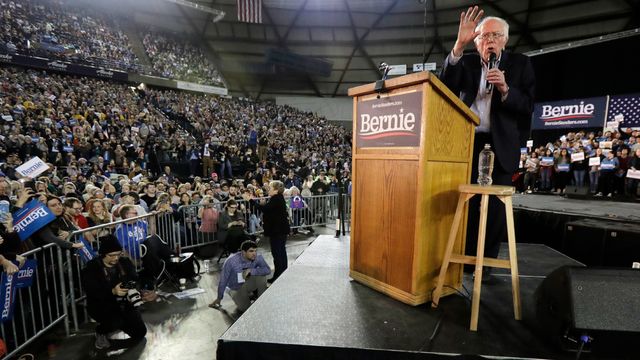 Biden, who finished a dismal fourth in the Iowa caucuses and fifth in last week’s New Hampshire primary, is at 15 percent, a decline of nine points from December.

Elizabeth Warren is at 12 percent, a decline of five points. She is matched by Amy Klobuchar, whose support rose by 5 points since the last NPR/Marist poll. Significantly, former South Bend, Indiana Mayor Pete Buttigieg, who has been heavily promoted by the media and the party establishment after essentially tying with Sanders in Iowa and narrowly losing to him in New Hampshire, registered only 8 percent, a five-point decline since December.

There are growing concerns within the party apparatus and much of the corporate elite that wins for Sanders in Nevada and South Carolina could set him up for victories on Super Tuesday that would make his nomination unstoppable. The response of the corporate media and the party establishment has been twofold: to promote the candidacy of Bloomberg and launch new political provocations aimed at derailing the Sanders campaign.

Because the Democratic National Committee (DNC) changed the criteria for qualifying for the nationally televised debates in order to accommodate Bloomberg, the pro-war, pro-corporate billionaire will participate in tonight’s event, marking his first appearance alongside his rivals. He was assured a place in the debate, to be broadcast by NBC from Las Vegas, by his poll numbers in Tuesday’s NPR/Marist poll.

Bloomberg is increasingly being promoted by the media and sections of the Democratic Party as the best hope for denying the nomination to Sanders, given the virtual collapse of the Biden campaign. This is despite the emergence last week of tapes and newspaper accounts documenting his racist defense of the “stop and frisk” policy he employed during his twelve-year stint as mayor of New York to terrorize mostly minority workers and youth. Also made public was his statement from 2008 that the ending of the racist “redlining” policy of the banks led to the Wall Street crash of that year, and the fact that he has been accused by a large number of female employees of making sexist and profane remarks and encouraging a hostile work environment for women.

The “mainstream” media has by and large downplayed these damning revelations and boosted his claim to be the best candidate to defeat Trump and “get things done” as president.

Simultaneously, a new political provocation has been unleashed against Sanders, following last month’s attacks by Hillary Clinton and the smear campaign organized by CNN and Elizabeth Warren at the time of the Iowa debate to brand Sanders as a male chauvinist who does not believe a woman can win the presidency.

The timeline of events strongly suggests that the latest scandal has been coordinated between the corporate media, the Democratic National Committee, the Biden campaign and a section of the trade union bureaucracy in an effort to blunt Sanders’ margin of victory in Nevada.

The smear campaign was launched on February 11 during MSNBC’s coverage of the New Hampshire primary, when commentator Chuck Todd quoted a diatribe against the senator that compared his online supporters to a “digital brown shirt brigade.”

This was followed the next day by a statement by Culinary Workers Union Secretary Treasurer Geoconda Argüello-Kline claiming that Sanders supporters had “viciously attacked the union and working families in Nevada” on social media after the union distributed a leaflet to members saying Sanders would “end Culinary Healthcare” if elected president. The union controls a health care trust providing insurance for 130,000 members and is adamantly opposed to Sanders’ call for “Medicare for All.”

On Saturday, February 15, the New York Times published an “Editorial Observer” comment by Michelle Cottle, who called Sanders supporters “rabid” and added, “The so-called Bernie Bros have a nasty reputation on social media for abusing those who dare to criticize their guy, spewing invective and issuing threats against offending organizations and individuals.”

The same day, Biden, speaking in Las Vegas, denounced Sanders for his followers’ alleged online threats against the Culinary Workers Union. He repeated the same attacks in television interviews on Sunday and Monday.

The Bloomberg campaign took the operation to a new low on Monday, releasing an ad that makes an amalgam between Sanders and Trump, flashing a series of tweets from apparent Sanders supporters. One tweet condemned by the Bloomberg campaign as “unacceptable” is from the Sanders campaign’s national press secretary, Briahna Joy Gray, in which she called the former New York City mayor a “racist authoritarian.”

The surging support for Sanders reflects a broad movement to the left among workers, students and young people, who are disgusted with the political establishment and attracted by Sanders’ talk of “democratic socialism” and his promises to address social inequality and the political domination of the “billionaire class.”