“This is the Dreyfus case of our age”

The visit was held on the eve of US extradition hearings on Monday, with Assange facing Espionage Act charges and life imprisonment for exposing war crimes. 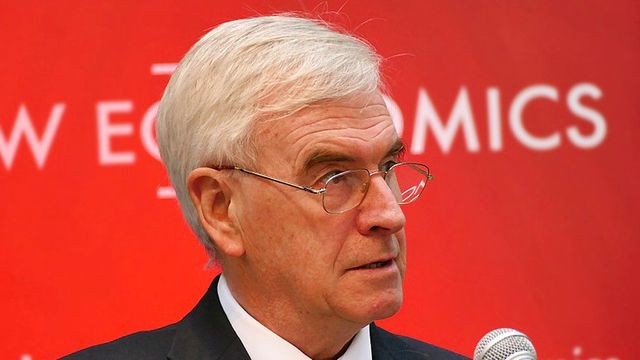 McDonnell spoke with Assange for around two hours. His meeting with the WikiLeaks founder coincided with a statement by the European Commissioner for Human Rights, Dunja Mijatovic, demanding his extradition be blocked because it would have “a chilling effect on media freedom.” Mijatovic warned that Assange would be “at real risk of torture or inhuman or degrading treatment,” in violation of international law, if he were dispatched to the US.

Speaking to the press outside Belmarsh, McDonnell stated that it was clear Assange’s protracted arbitrary detention had taken a toll on his health. The conditions of Assange’s imprisonment, in which he is isolated for over 20 hours a day, raised concerns over a further deterioration of his medical state. The WikiLeaks publisher, however, was strong, determined and familiar with the legal arguments that would be deployed against his extradition. 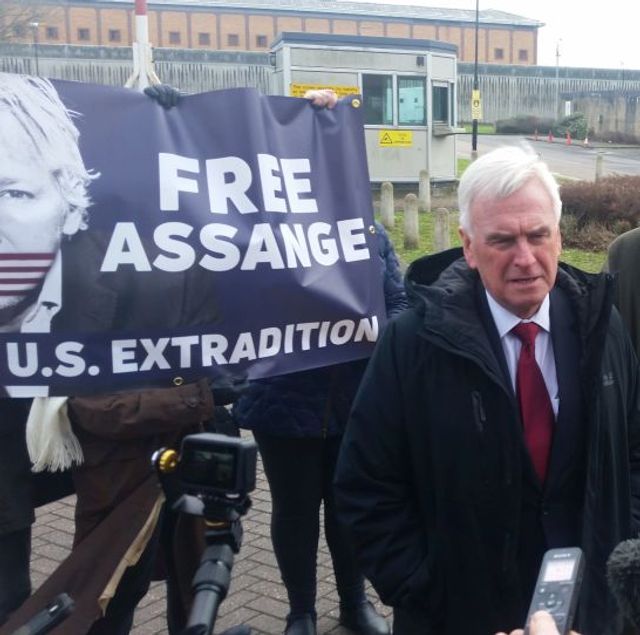 John McDonnell speaks to the media outside Belmarsh Prison

McDonnell declared, “We don’t believe that extradition should be used for political purposes, and all the evidence ... demonstrates that this is a political trial, and we are hoping that the courts will see it that way.”

Speaking for sections of the establishment nervous over growing support for Assange, McDonnell warned that a successful extradition would “damage the democratic standing of our own country as well as America.” It would, he said, “damage our reputation.”

The Labour MP stated, “I think this is one of the most important and significant political trials of this generation. In fact, longer. I think it is the Dreyfus case of our age, the way in which a person is being persecuted for political reasons for simply exposing the truth of what went on in relation to recent wars.”

Alfred Dreyfus, a Jewish officer, was framed and imprisoned by France’s military command, government and extreme right-wing forces at the turn of the 19th century. Ultimately Dreyfus was exonerated and freed thanks to the political fight spearheaded by the French socialist movement and courageous intellectuals, including the novelist Émile Zola.

McDonnell’s comparison points to the immense historical significance of the Assange case and its implications for the democratic rights of millions of people. The reference to the Dreyfus case, however, highlights the politically criminal role of Labour and McDonnell himself, in refusing to mount any struggle in defence of Assange.

McDonnell echoed the position laid down by Labour leader Jeremy Corbyn last April that Assange’s fate should be left to the courts. “We are hoping that in court [Assange] is able to defeat the extradition bid. We don’t believe that extradition should be used for political purposes.” He claimed that he, Corbyn and unnamed Labour MPs could build a cross-party alliance to fight extradition, including Conservative MPs such as David Davis.

He repeated Corbyn’s claim that there were “deep doubts” in the Tory government about the unbalanced nature of the extradition treaty between the US and the UK that would provide the basis for such an alliance.

McDonnell said Labour would be constrained from even raising the issue in Parliament, let alone campaigning actively for Assange’s freedom. “The problem we have now is that when the hearings start, they will be sub judice, and it will be difficult to raise it in the House of Commons. But we will be looking to see how we can raise it as often as we possibly can, of course, within parliamentary rules.”

This is an extraordinary declaration. McDonnell said nothing about Assange for 10 years, including while occupying the second highest position in the Labour Party. He broke his silence on February 4, as keynote speaker at a meeting organised by the Don’t Extradite Assange campaign, only in order to head off widespread criticism of his and Corbyn’s silence, especially during the campaign for the December 2019 general election.

Now, just over two weeks later, he used a press conference after his first ever meeting with Assange to profess his respect for the courts and his intent to have friendly chats with the one Tory MP who has professed mild concern regarding Assange’s fate.

Following his remarks, a WSWS reporter asked McDonnell whether Labour would mobilise its membership and the working class to secure Assange’s freedom. McDonnell stated only that he would “urge” people to attend demonstrations for the first day of the hearing and that the “campaign will continue.”

Another WSWS reporter asked McDonnell, in the context of elections for a new Labour leader, what position candidates Rebecca Long-Bailey and Keir Starmer take on the Assange case. McDonnell claimed that he did not know, telling the WSWS reporter to “ask them yourself.” He “hoped” the Labour Party would oppose the extradition—“within parliamentary rules,” of course.

McDonnell’s profession of ignorance regarding the two most prominent candidates for Labour leadership, to be decided in April, is a shameful evasion.

Starmer, the frontrunner, was intimately involved in the political conspiracy against Assange. He was Director of Public Prosecutions when the Crown Prosecution Service (CPS) opposed a bail application for the WikiLeaks founder, ensuring his continued arbitrary detention. He headed the CPS in 2012 when it pressured Swedish prosecutors not to drop their “sexual misconduct” investigation, to provide the British authorities with a pretext to continue their siege of Ecuador’s London embassy, where Assange was a political refugee.

Long-Bailey has been anointed by McDonnell as the favoured candidate to succeed Corbyn, apparently without ever asking her opinion on Assange’s extradition during the two years they sat together in the shadow cabinet.

McDonnell refused to provide an honest answer because he knows full well that the incoming Labour leadership will be composed of implacable foes of Assange’s freedom. He came under immediate attack by the Blairite Jewish Labour Movement (JLM) for his “deeply offensive” comparison between Assange and Dreyfus. Mike Katz, national chair of the JLM, declared, “What an absolutely ridiculous and offensive thing to say. Though I can see how you could confuse Dreyfus, a loyal soldier wrongly accused of treason because he was a Jew, with an entitled bloke who hid in a foreign embassy to evade extradition on a rape allegation.”

While claiming to defend Assange, Corbyn and McDonnell are covering the backs of the political scoundrels and warmongers who make up the Parliamentary Labour Party and sowing illusions in a Tory government that has detained him in solitary confinement in a maximum security prison, trampled on his legal and democratic rights and done everything possible to facilitate his dispatch to the war criminals in the White House and the Pentagon.

Corbyn and McDonnell are seeking to promote illusions in Parliament and the judiciary out of fear that Assange’s plight could become the focal point for an independent political movement of the working class, amid an upsurge of the class struggle and mass hostility to war, austerity and the turn by governments internationally to authoritarianism.