“They would privatize everything if they could.”

As the World Socialist Web Site reported Saturday, 200,000 Ontario teachers and support staff workers joined a one-day strike Friday in protest against the assault that the province’s Conservative government is mounting on public education. 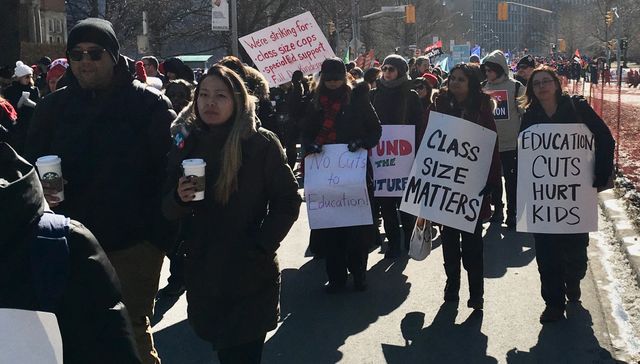 Led by the Trump wannabe, Premier Doug Ford, the Conservatives have cut nearly a billion dollars per year in education funding and are seeking to impose dramatic class-size increases in upper grades, and to open a breach for privatization through the imposition of mandatory online courses.

The government has also adopted legislation that imposes real-terms wage and benefit cuts on one million public sector workers, including teachers, by capping increases to 1 percent per year for each of the next three years.

Members of four separate unions, the teachers, school custodians and other support staff voted overwhelmingly for strike action. There is huge sympathy and support for their fight to defend public education within the working class and palpable hatred for Ford and his government.

Yet, as a statement published on the WSWS and distributed at a 30,000-strong rally of teachers, other educations workers and their supporters in Toronto Friday explained, the unions and their allies in the New Democratic Party (NDP) are doing everything to frustrate a mass mobilization of the working class against Ford and his austerity agenda. 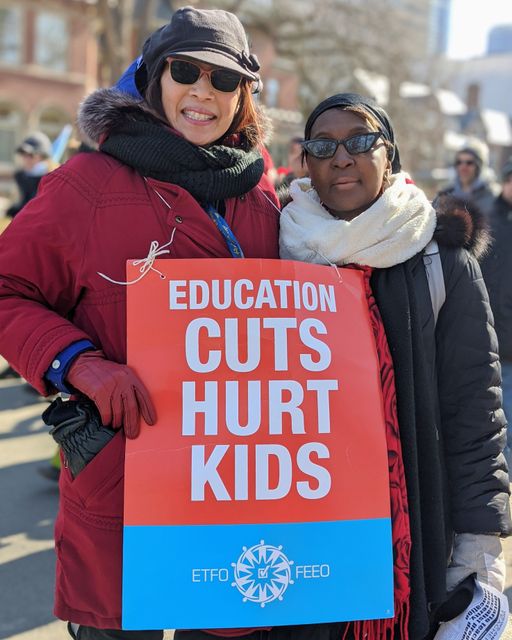 The largest union representing provincial public sector workers, the Canadian Union of Public Employees or CUPE, already rammed through an agreement covering more than 50,000 other Ontario school board employees that in return for temporarily rolling back a fraction of the cuts, accepted the government’s real wage and benefits cuts.

The statement, “Ontario teachers require a socialist program to defeat austerity, defend public education," drew special attention to the unions’ “radio silence” on the government’s repeated threats to outlaw teacher and support-staff job action. “Make no mistake,” it affirmed, “this is because they intend to invoke the government’s adoption of a back-to-work law as the pretext for shutting down the teachers’ struggle, just as unions across Canada have done for decades.”

On Saturday, the Ontario Federation of Labour (OFL) held a protest outside the provincial Conservative Party convention in Niagara Falls. There, several union bureaucrats, including OFL President and former Ontario Secondary School Teachers’ Federation official Patty Coates blustered about the possibility of a “general strike,” while appealing to Ford and his Conservatives to “change course.” “If Conservatives don’t listen to us ... we will shut this province down,” claimed Coates.

This is bombast. The OFL has spent the past 20 months doing everything in its power to suppress worker resistance to Ford, for fear that it would escape their control. But the union bureaucrats recognize that the mood among teachers and the working class as a whole is increasingly militant, and is adapting to it rhetorically, the better to maintain their control, defuse opposition and promote the lie that workers can fight Ford by electing a right-wing Liberal or NDP government two years hence.

Significantly, the Ontario English Catholic Teachers’ Association responded to Friday’s powerful display of teacher militancy by announcing it is suspending further rotating walkouts, on the pretext that progress is being made at the bargaining table.

Many of the teachers who spoke with the WSWS on Friday were supportive of a broader struggle, including a general strike, and were aware that there has been a wave of teacher strikes prompted by similar issues in countries around the world.

Diana, a teacher for 27 years, spoke with the WSWS at the Toronto rally about the deteriorating conditions at the French immersion school where she works. “Because of budget cuts,” said Diana, “the music and art classes are not taught in French, even though this is supposed to be an immersion school. Special education has also been cut. In one class, with 20 students, half have an IEP (Individualized Education Plan).

“A fifth-grade class of English track learners has 36 students and the teacher can hardly walk through the room. The school we work at is in an inner-city neighborhood. There’s lots of violence and mental health problems in the area, but we only have one social worker for four or five schools.

“The politicians think education isn’t important. They always attack us and say we have time off in the summer and we shouldn’t complain. But we can’t teach lessons anymore because class sizes and conditions have gotten so bad.”

Kwang, a teacher with 15 years’ experience, said, “By cutting money, they are only going to hurt the kids, especially the struggling ones. Class sizes are going to increase, while funding decreases. We try to take kids who are disadvantaged at home and treat them equally in school. But they are cutting special education and putting the special needs kids into regular classes. That means the teacher has to spend all her energy dealing with behavioral problems instead of teaching. 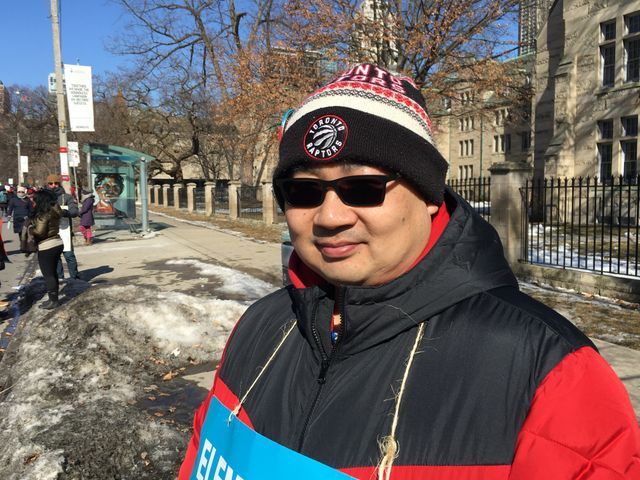 “They are also pushing the standardized tests to control what we can teach. They can’t control us directly, so they do it with the tests.”

Martha explained how cuts have eviscerated the Toronto District School Board’s outdoor education program, where she worked for 17 years. “Not all school boards have outdoor education. The one I worked at was known as the Toronto Urban Studies Center, which still exists. We took kids outside of the classroom to explore nature, but the city as well, looking at the city we live in as an important resource.

“They’ve cut the staff by half in one year, at all the centers. Quite a few people have lost their jobs.

“We have to unite more broadly with other workers. As my husband pointed out, once they finish with us, they’re going to go after the nurses and the healthcare system. The attacks are bigger than just on education, and if we don’t stand up for everybody then what’s the point?

“I also think there’s potential for uniting across borders.”

Emmie, a veteran teacher, said she was demonstrating to make sure that students and younger teachers have smaller class sizes and better wages.

“People say, ‘Oh, back in my day we had 35-40 students in the classroom.’ But do we really want to go back to those days? I teach grade six inclusive where you have students with special needs. I have a second teacher helping me and I see the benefit of having help in my classroom, working with those students.

“Teachers are poorly paid, and the cost of living keeps going up, up, up. A very small house in Toronto is over a million dollars and it’s still going up.” 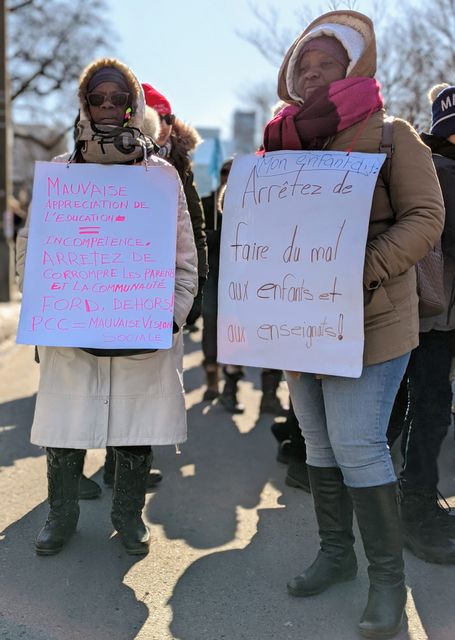 “I heard this teacher on my way over on the subway saying that in England, where she was part of an exchange program for teachers for four years, that it is the same issues over there as over here, class sizes are too big!”

Speaking of the political establishment, Emmie asked, “You think they really care about public education? They wouldn’t mind privatizing everything if they could.”

Cecile and Mariel are both French-language teachers.

“My sign was written by my daughter,” Mariel explained. “I asked her to write down what she was feeling about the strike, so it says, ‘Stop hurting the children and their teachers.’

“I think these attacks are really bad news,” added Cecile, “because education is the world. If you attack education, you destroy the world community.” She continued: “It has got to stop somewhere. If we in Canada can find a way to stop it here, then others can copy from us and stop the attacks in their countries.” 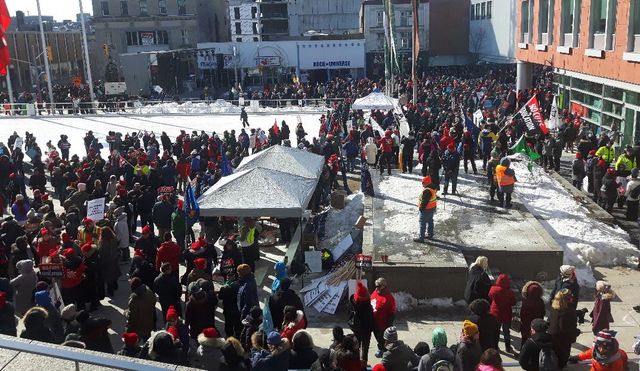 The rally in Kitchener drew 8,000 people

The WSWS also interviewed participants in a rally Friday of teachers, school custodians, support staff and students outside Kitchener City Hall. Police estimated the crowd at 10,000, making it one of the largest worker protests in the history of the Waterloo Region.

Rob, a Waterloo Region high school teacher, expressed frustration over union leaders’ failure to advance any strategy to counter the government’s plans to outlaw teacher job action. “I didn’t hear anything from the speeches today about it… I was expecting to hear something about what we do next. Other than a couple who mentioned not voting for Ford in two years, I didn’t hear anything. I want to know what we do next, not what might happen in a couple of years.” 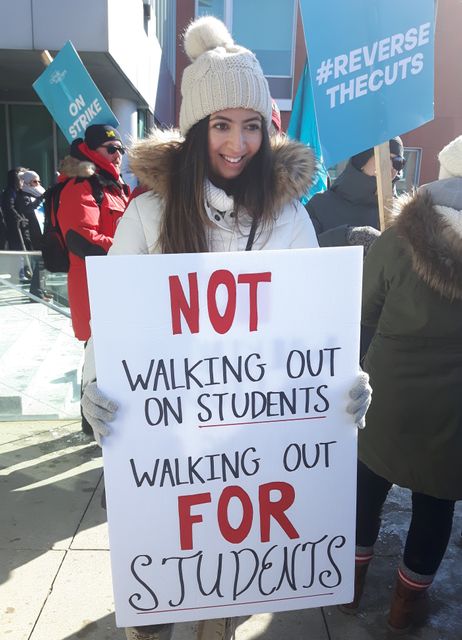 Jessica, a high school student in Kitchener said, “I agree with your leaflet about how this is about more than the teachers. As bad as the government has been to them, it’s about a lot of even bigger things. My mom can just get part-time jobs. She’s got two of them. She makes 16 bucks an hour. That makes it hard on me and my brother. I hate to say it, but we’re pretty poor. So, I think it’s about a lot of things. The cuts to education, finding a good job, hoping to get a future. It doesn’t look easy.”

Susan, a young elementary school teacher said, “I’m against all the cuts to education. It’s terrible what Ford is doing. It’s going to get harder and harder for my students to get a good education the way things are going. That’s why I’m out here today. But I’m not forgetting about wages. I make less than 50 grand a year. That’s not a lot in this city especially now that we’ve become a bedroom community for commuters who travel into Toronto. The rents just keep going higher and higher. So, Ford wants to illegally freeze our wage increase to one percent. I saw the other day that inflation is now up to about two and a half percent. So, he’s really reducing our take-home pay.”