On February 11, the administration of Philippine President Rodrigo Duterte gave official notice to the US Embassy in Manila of its intention to terminate the country’s two-decade-old Visiting Forces Agreement (VFA) with Washington. The move is the most serious rupture in relations between Manila and its former colonial master since the granting of formal independence on July 4, 1946. If not retracted, the termination will go into effect 180 days after the official notice.

The VFA was concluded as an executive agreement between the two countries in 1999 to allow the rotational presence of US military forces in the Philippines. It was seen as a means of reversing the impact of the 1991 decision of the Philippine Senate, by a one-vote majority, to refuse to extend Washington’s lease on its military bases in the country. 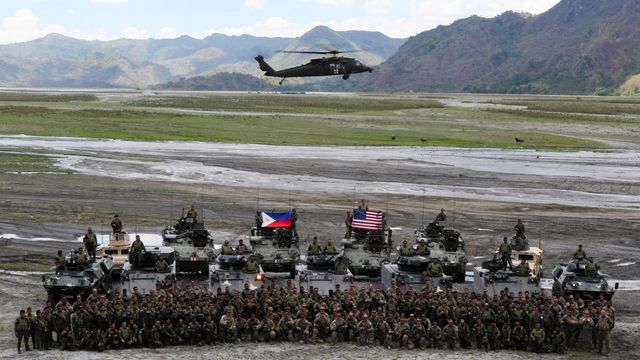 Under the terms of the VFA, the US military has staged thousands of joint war games in the Philippines, including the annual Balikatan, or ‘shoulder-to-shoulder,’ exercises. Each year Washington has deployed increasing numbers of troops and military equipment to these exercises, which have shifted in focus from counter-terrorism activities to so-called maritime security, an expression of the Pentagon’s open warmongering against China in the South China Sea. At present about 300 such exercises are conducted every year.

Duterte is a right-wing populist whose fascistic ‘war on drugs’ has led to the extrajudicial killing of tens of thousands of poor Filipinos over the past three years. He represents the interests of layers of Filipino capitalists engaged in real estate development and those based in regions of the country at some remove from Manila. These layers are seeking a vast infrastructural investment to enhance their business positions and Duterte articulates these concerns in his signature ‘Build, Build, Build’ program, which proposes to invest billions in roads, bridges, dams, and new airports. The money for this, Duterte claims, will come above all from investment from China.

Washington has sought to shore up its economic decline by thwarting the rise of China, by all means including military. By asserting its ‘national interest’ in the South China Sea, the United States has brought tensions throughout the Asia Pacific region to the brink of war. Courting Beijing’s investment, Duterte has sought to distance Manila from this war drive, ignoring the ruling against China secured by the Aquino administration from the International Tribunal on the Law of the Sea.

Washington will happily fund and prop up tyrants and thugs around the globe until they cross US imperialist interests. As Duterte moved increasingly toward Beijing, Washington began to denounce him for human rights violations in his war on drugs despite the fact that the Obama administration initially provided millions of dollars in funding to Duterte’s murderous crusade before his geopolitical realignment became sharply defined.

Part of the human rights pressure on the Duterte administration was a bill that passed the US Senate in January, which imposed economic sanctions under the Magnitsky Act on Philippine political figures tied to the extrajudicial killings under Duterte and denied them admission to the United States. When Philippine Senator Ronald ‘Bato’ dela Rosa, a key Duterte ally and former head of police, who has been closely tied to extrajudicial murders for decades, was denied admission to the United States, Duterte responded by announcing that he was tearing up the VFA.

US Defense Secretary Mark Esper clearly articulated the perspective of US imperialism on this matter: the VFA was a critical aspect of Washington’s great power conflict with China. He told the press, “As we try and bolster our presence and compete with [China] in this era of great power competition, I think it’s a move in the wrong direction for the longstanding relationship we’ve had with the Philippines for their strategic location, the ties between our peoples, our countries.”

Beijing responded on February 17 when Foreign Ministry spokesperson Geng Shuang told a press briefing that the Philippines has the “right to uphold an independent foreign policy.” He continued, “It is also China’s belief that exchange and cooperation between countries should not only benefit those involved, but also advance regional and global peace and stability.” The military ties between Washington and Manila, Beijing argued, were not advancing global peace.

US President Donald Trump seemed to approach the matter as a business negotiation, responding in a press conference, “If they would like to do that, that's fine. We’ll save a lot of money.… My relationship, as you know, is a very good one with their leader [Duterte]. And we’ll see what happens.”

Duterte’s decision has sent shockwaves through the Philippine ruling elite, the older, more established layers that are intimately tied to Washington. They express their interests through the Makati Business Club (MBC), which stated that the military alliance with the United States was “critical” to “reserving peace and rule of law in the region.”

The Armed Forces of the Philippines (AFP) is heavily dependent on money from Washington. Between 2016 and 2019, the US supplied the Philippine military with $US550 million. The primary function of the AFP is as a domestic police force: dealing with insurgencies, suppressing dissent among the working class and peasant population, and arresting political activists. When Trump speaks of saving money it raises the specter of cuts to military aid, and Filipino capitalists see the menacing threat of social unrest. This is the perspective of the Makati Business Club when it speaks of “preserving peace” and “rule of law.”

In the days immediately following Duterte’s announcement, both Philippine Secretary of Foreign Affairs Teodoro Locsin and Defense Secretary Delfin Lorenzana, spoke in favor of retaining the Visiting Forces Agreement. The opposition, organized in the Liberal Party, expressed the need for Senatorial review of Duterte’s decision to end the VFA. Their protest is hobbled, however, by the fact that in the main these are the same political figures who argued in the late 1990s that the VFA was an agreement, not a treaty, and as such did not require senatorial approval to be enacted.

The Liberal Party opposition remains a minority in the legislature and many of its leaders have sought to destabilize the Duterte administration by channeling social unrest behind anti-Chinese chauvinism as a means of targeting the president and his ties with Beijing. The opposition has capitalized on fears of the spread of the novel coronavirus to cultivate an ugly racism in the press and social media. “No Chinese Allowed” signs are cropping up on businesses and demands for the deportation of Chinese workers are being openly expressed by mayors.

The majority of Filipino politicians have, for the time being, allied themselves with Duterte. Philippine history demonstrates just how quickly such loyalties can be abandoned, particularly in the face of a possible military coup. The top brass of the AFP were trained in the United States, many are graduates of West Point and Annapolis, and their loyalty has always been more with Washington than with the occupant of the presidential palace of Malacañang.

With the termination of the VFA pending in the next six months, there will be high-level discussions between Washington and Manila and between the Pentagon and the AFP. US Assistant Secretary of State for Political-Military Affairs R. Clarke Cooper told the press that there would be “ongoing talks” about the VFA leading up to a US-Philippines Strategic Dialogue in March to discuss the issue.

The scrapping of the VFA threatens to end the immensely lucrative war games and possibly cut US funding, which represents a significant chunk of the AFP budget. There are without doubt “ongoing talks” of another sort being conducted in backrooms to plot extraconstitutional means of resolving the termination of the VFA.