The first week of the extradition hearing in USA v Julian Assange ended yesterday at Belmarsh Magistrates’ Court with Judge Vanessa Baraitser rejecting a submission from Assange’s lawyers that he be allowed to sit with them in court.

Baraitser ruled Assange must remain in a bullet-proof glass-encased dock when the hearing resumes in May for the evidence phase of the hearing. Assange is fighting multiple indictments under the Espionage Act for exposing US war crimes, amid fears the Trump administration may seek the death penalty. 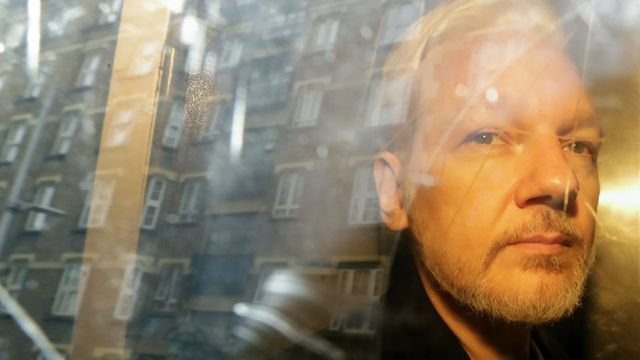 In their overnight submission to Baraitser following a defiant protest by Assange in court the previous day, his lawyers outlined several ways in which their client’s right to a fair trial was being violated.

These included: “i) the physical layout of the court and the distance it places between Mr Assange and his legal team, ii) the high occupancy level of the court meaning that defence lawyers are unable to meet freely to receive instructions or impart advice, iii) the court’s poor acoustics and amplification, especially behind glass and proximity to audible protests, iv) the security procedures in place in the dock at Woolwich Crown Court which do not permit the passing of notes and which inhibit confidential instruction taking, v) the limited access to legal visits outside of court sitting times during the court day and vi) Mr Assange’s precarious psychiatric vulnerability, ongoing medication and the consequent elevated emotional strain of these proceedings of which the court is aware.”

Baraitser responded with undisguised malice, rejecting each of these concerns and telling Assange and his legal team, “You’ve had no difficulty at all.”

Speaking to the submission, Mark Summers QC outlined the opinion of leading legal authorities, including the European Court of Human Rights, which had ruled that similar glass docks in Russia had violated defendants’ fundamental due process rights.

Such docks, isolating defendants from the body of the court, were of relatively recent origin in England. Introduced in the 1970s, they became established in their current form as a separate glass-enclosed room only in the early 2000s. In many other jurisdictions, including the United States, defendants, including those accused of violent crimes, sit with their lawyers in the court—a crucial part of the presumption of innocence.

Baraitser had claimed the previous day that she had no jurisdiction to allow Assange to sit with his legal team. Summers cited several precedents to the contrary, making clear that a district judge in the magistrates’ court “has an inherent common law power to control the conduct of proceedings before it.”

Baraitser had also objected that she would need to conduct a “risk assessment” in relation to Assange being allowed into the main body of the court. In their submission to Baraitser, Assange’s lawyers explained that “this court is neither invited nor required to carry out any ‘risk assessment’ of Mr Assange’s presence in the well of the court.”

Summers told Baraitser, “In terrorism cases in which counsel in this case have been involved, category AA prisoners have given evidence in the well of this very courtroom for weeks.” Assange is a category B low-risk prisoner.

Baraitser had also claimed that the chain of custody would be breached if Assange were allowed in the well of the court, even asking Assange’s defence whether a bail request was being made. Summers dispelled this deliberate obfuscation, citing precedents which made clear that “custody” applied to any place in the court building in which the defendant was under the control of prison staff: “Once in custody there is no more magic to the court dock than there is to say, the Belmarsh-Woolwich tunnel or a court transport vehicle.”

The submission made by Assange’s legal team left no room for ambiguity: Assange’s due process rights are being violated and his right to a fair trial denied. But Baraitser was determined to deny Summers’ every point. Despite conceding that she had jurisdiction to rule on court procedure, she flatly refused to allow Assange to sit with his lawyers. Rattling off a pre-prepared response to the defence submission, she concluded by declaring, “I’m not aware of any particular aspect of your condition that requires you to leave the dock and sit next to your legal team.”

This was a flat-out lie. Only three days prior, Assange’s lawyers had quoted in court the medical opinions of Professor Kopelman and Dr Sondra Crosby who submitted that Assange had severe depression, was in a fragile state and was at risk of death if extradited. Baraitser had told the court just the previous day that Assange was medicated and was having trouble concentrating.

The defence has argued that espionage is widely regarded as a “pure political offence”, automatically barring any extradition on these charges.

Prosecuting barrister James Lewis QC claimed in response that “there is no bright line test” for what constitutes a “pure” political offence under English law. In deciding whether an offence is political, he said, “One always has to look at the purpose of the crime.”

The test that must be applied is whether the conduct had “the object of overthrowing or changing the government or inducing it to change its policy.” According to the prosecution, what Assange is accused of “does not come within a million miles of that definition.”

Directly addressing the absurdity of this legal position, defence lawyer Edward Fitzgerald QC said, “Just stepping back for a moment, we’re in a pretty strange Alice in Wonderland world… it’s a very bizarre argument…that a treaty which controls and gives rise to the request has got nothing to do with the lawfulness of the request or its pursuit.”

Contrary to the prosecution’s claims that the 2003 Act is the final word on the matter, Fitzgerald demonstrated how it had repeatedly “been shown to be far from comprehensive… parliament can never envisage all the circumstances that will arise.”

“There is a remedy” available through the rulings of the courts, said Fitzgerald, “it doesn’t come from the words of the Act… it’s read in as a principle of public international law.”

Speaking on the definition of a political offence, Fitzgerald drove home the fact that, even on the prosecution’s own terms, the allegations against Assange are expressly political.

Baraitser challenged Fitzgerald, asking why Assange’s alleged actions were seeking to induce a change in government policy and were not instead about exposing government information. Fitzgerald answered, “The two are intimately connected… The Rules of Engagement were published to show that war crimes were being committed that breached their own Rules of Engagement.”

This was, he said, “the very definition of seeking to induce a government to change its policy… What other purpose could there be?” Fitzgerald noted, “WikiLeaks didn’t just seek to induce a change, it did affect a change. It was one of the key reasons why policy was changed and why there was a withdrawal [from Iraq].”

The extradition hearing will resume on May 18. A brief administrative hearing will take place at Westminster Magistrates’ Court on 25th March, 10am, and a case management hearing has been scheduled at Woolwich Crown Court on 7th April, 10am. 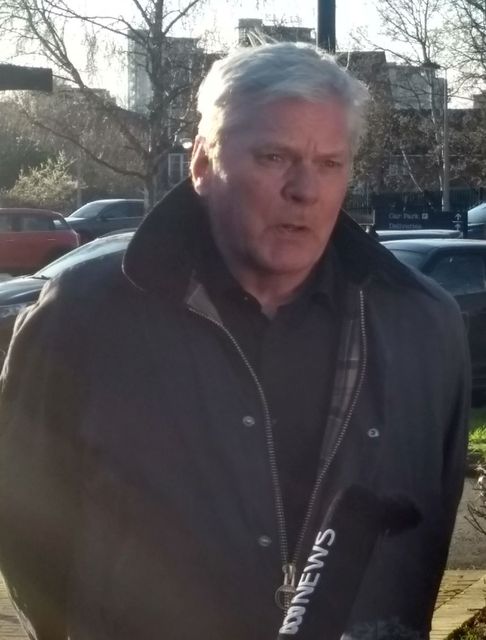 Speaking after the hearing, WikiLeaks editor-in-chief Kristin Hrafnsson addressed the media: “It ended with a great disappointment and an outrage when the judge decided, despite overwhelming arguments on behalf of Julian, that he would not be able to step out of the glass cage and sit with his lawyers when the hearings recommence in May. I say it’s an outrage because his lawyers presented rulings from the European Court of Human Rights, in Strasbourg, where it was ruled that in similar circumstances it was totally against the principles of fair trial to keep an individual in a glass cage.”

“It is an outrage that after a presentation from his lawyers of almost an hour, for this nonviolent intellectual to sit with his lawyers in the court room, the judge read out a pre-written ruling.

“So once more after these four days, we get a strong indication that this is not a fair trial. Julian will not get any fairness out of this court and I am absolutely outraged. We’ve heard examples that everywhere all around the world it is a common practice, out of dignity and fairness, that a defendant sits with his lawyer.

“Even in America accused murderers sit beside their lawyers in a court room without shackles. In this instance, we’re talking about a publisher and a journalist fighting extradition who is put in a glass cage. It’s impossible for him to have a fair trial in this condition and [with] the obvious bias of the judge in this case.

“The week has now come to an end on this bleak note and it does not give us any hope that there is any fairness to be found in this court.” 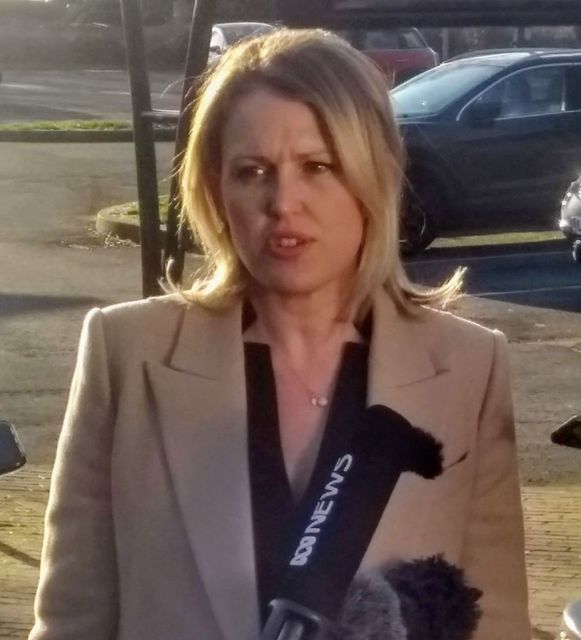 Jennifer Robinson, a leading member of Assange’s legal team, told the media, “As you’ve heard this afternoon, Mr Assange is having significant difficulties in participating with these proceedings. He’s unable to pass notes in a confidential and secure way to his legal team, he’s unable to seek clarification from his legal team and give instruction during the course of the proceedings, and the judge has refused his ability to leave the dock to be able to participate properly. This obviously raises serious concerns about his fair trial rights and his ability to properly participate and defend himself.

“This week has been really important in laying down the defence case. Finally, you’re hearing how the US indictment has misrepresented the facts in order to be able to justify his extradition to the US. And this of course in a case which is unprecedented: the first ever time the extradition act has been used against a publisher. He’s being sought for extradition for having published evidence of war crimes, human rights abuse, corruption the world over.

“We heard this week that WikiLeaks published this material after Chelsea Manning gave it because it was, as she said in her own trial in the US, because of her own conscience, because of the war crimes she’d seen in the material she exposed.

“This case is setting a terrible precedent for press freedoms. We’re very concerned about the process given what we’ve heard today. And it’s important that we follow these developments leading into May.”