On Monday, over 500 teachers, staff, students, and parents protested outside Chula Vista Middle School in San Diego, California, where a district school board meeting was held to push through 237 layoffs and cuts to vital programs in the Sweetwater Union High School District (SUHSD) along the US/Mexico border. 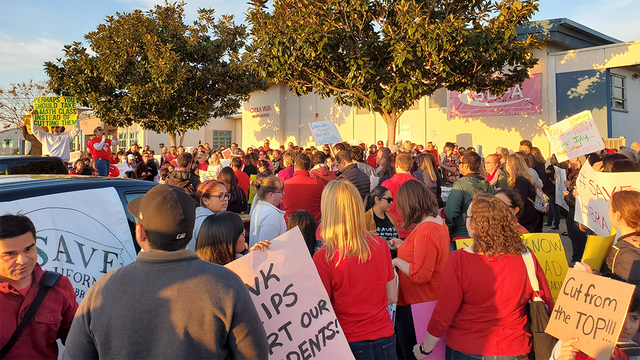 Teachers rally before the board meeting

The layoff item was initially buried in the evening’s agenda to item 43 out of 45 in a bureaucratic attempt to ensure as few people would be in physical attendance to witness and protest the cuts which were passed around 11:30 PM. When the board realized hundreds were lining up for public comment, they pushed the agenda item to the beginning. While many still remained in the audience late into the night, an additional 700 viewers watched the meeting which was streamed online.

The Board of Trustees voted 3-2 to approve the plan proposed by Superintendent Dr. Karen Janney to issue 237 pink slips, or layoff notices, to teachers and staff by March 15, as well as close all learning centers in the district effective July 2020. The layoffs include 182 full-time teachers, 20 counselors, 23 librarians, nine school site management positions, and 12 learning centers that serve around 1,300 at-risk students.

The district claims that the proposed cuts to staff and closure of the learning centers will amount to $20 million of the $30 million needed to cover the budget deficit for the upcoming 2020-2021 school year. The district is hoping to negotiate with the unions the remaining annual deficit through cuts to teachers’ wages with a proposed 7 furlough days in the upcoming year. 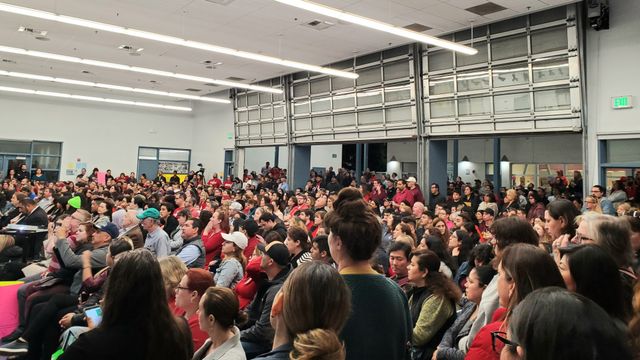 During the board meeting, nearly 100 teachers, staff, students and parents spoke during public comment to protest the slashing of jobs and vital services for students.

Many other students took to the microphone, describing the issues they face from suicidal ideation, to anxiety and attention deficit learning disorders, to serious health issues—cancer and autoimmune diseases that have forced them to rely on the flexibility offered by the learning centers to help them get through their schooling. Multiple students cited that they were fearful of losing their counselors, stating that they had contemplated or attempted suicide, but were on a better track thanks to their counselors. Through teary appeals, the students understood clearly that they were in a fight for their lives.

Despite the devastating cuts planned for the upcoming year, even more are being planned to close a $68 million deficit. Further layoffs, cuts, and closures can be expected in the 2021-2022 academic year.

The World Socialist Web Site spoke with teachers about their concerns over the coming layoffs and cuts. Gian, a chemistry teacher at Castle Park High School in Chula Vista, noted that his lack of seniority puts him at risk of receiving a pink slip in March and spoke on the need to unite with other teacher struggles. “Right now it’s Sweetwater, but in the next few years it could be San Diego Unified or Chula Vista [school districts] that are affected by budget cuts. The school board is saying there was faulty software between the accounting departments that led to this budget crisis, but now teachers and students are being made to pay for it.”

Kelly, a teacher at Castle Park High School in Chula Vista, denounced the school board’s proposal, noting that the school had already lost a librarian. “The teachers at our school are fairly young so almost every department is affected by the pink slips because of the five-year seniority minimum, including science, math, social studies, and English. The learning centers are also being cut, which will affect hundreds of students who need the extra help. About 800 students graduate through our learning centers each year alone.” 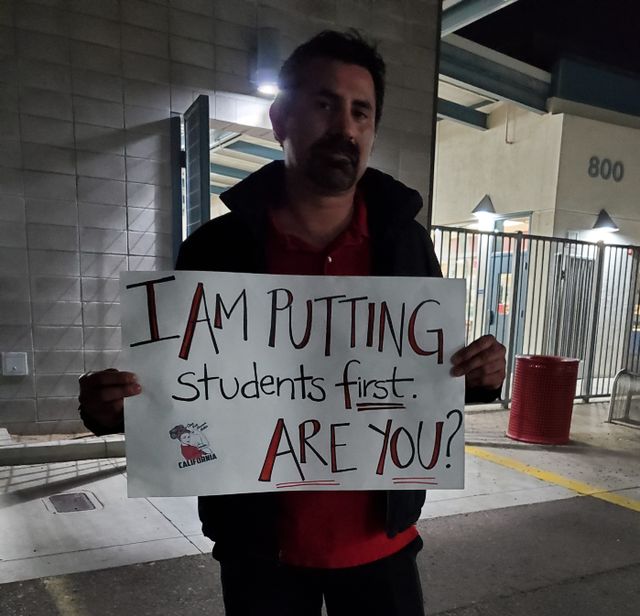 Sergio, a history teacher at Hilltop Middle School, told the WSWS, “I am worried about all the teachers and the librarians who are getting laid off. They are my friends and coworkers. Some of them have masters and doctorates, and what for? It’s so disappointing. They always cut from education, and they never cut from other things.”

In discussions about the lessons of the teachers struggles that broke out over the past two years in the US and internationally, Sergio stated, “I was actually at the Arizona teacher strike, I have friends and family there who are teachers, and I know there have been others up in San Jose and South Bay, even San Diego Unified is facing the same issues that we are.”

He was surprised to learn that the Democrats and former Governor Jerry Brown led the charter school movement in California, and agreed that the attack on education requires a political fight by teachers. “Education is under attack. The establishment parties are not that different at this point. They have turned the districts into corporations, even here in a blue state. I feel that they want an entire population of unskilled and ignorant people that they can control and manipulate.” 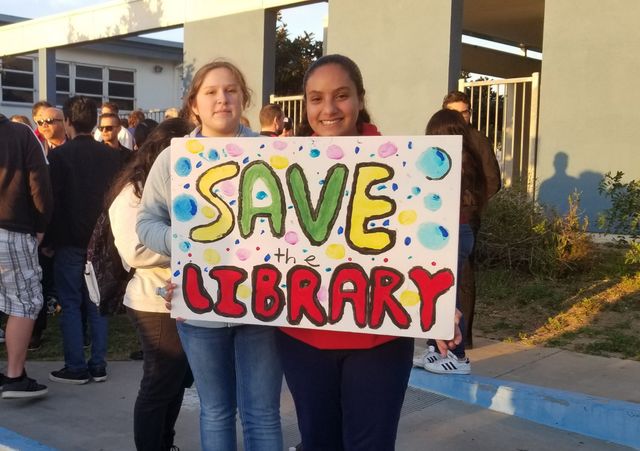 In discussing the need for the working class to be politically independent from the Democratic Party and the SEA, he said that teachers had been calling for a vote of “no confidence” with the school board. The union’s response was to push back, claiming that since the SEA was in negotiations with the district it would be counterproductive, telling him, “Now would not be a good time for that. It would mean that we don’t believe in the person we are negotiating with even though we are at the table.”

During her speech, Superintendent Janney cited declining enrollment, rising pension costs, an increase in funding needs for special education support, and the recent, possible expansion of the neighboring Chula Vista Elementary School District from K-6 to K-8 in the coming year as factors out of the district’s control that influenced their decision to issue so many layoff notices for the upcoming school year.

She avoided any reference to ongoing fraud investigations pointing to the mismanagement and loss of millions of dollars under the direction of the former Director of Finance Doug Martens and Chief Financial Officer Karen Michel who mysteriously retired months before the revelations of a budget shortfall were announced.

In response to this blatant evasion, one teacher responded, “Schools across the state are receiving less funding due to decreasing student enrollment, but they certainly are not being monitored by their County Office of Education or being audited by the Securities and Exchange Commission for fraud. We are the only district in the country with a negative certification. ...This is smoke and mirrors. ... Everyone in this room is a lot smarter than you give us credit for.”

To carry their struggle forward, Sweetwater teachers should form rank-and-file committees, independent of the SEA, to fight against all layoffs and budget cuts and make appeals to teachers and workers throughout the state and beyond. Right now University of California grad students are conducting a wildcat strike in defiance of the United Auto Workers. Conditions in Oakland and Los Angeles, where teachers struck last year and were bitterly betrayed by the unions, have only gotten worse.

After a six-day strike in January of 2019, the Los Angeles Unified School District worked with the United Teachers Los Angeles to ram through a deal crafted by leading state Democrats, including Los Angeles Mayor Eric Garcetti and California Governor Gavin Newsom. Class sizes of 39 have barely changed, and the paltry raises have done nothing to meet inflation and rising costs of living.

Despite major districts across the state being out of contract at the same time, the unions worked to isolate the Los Angeles teachers during the strike. Randi Weingarten, president of the American Federation of Teachers (AFT) and member of the Democratic National Committee, told striking teachers, “This is not about a strike wave—this is a specific fight for the kids and public schools of LA.”

The fight facing Sweetwater teachers is, of course, not confined to the district, the state of California, or even the US. Sweetwater teachers must draw the lessons of Oakland, Los Angeles, and the movement of teachers throughout the world, and break the isolation of their struggles imposed by the unions.