Brisbane rally calls for freedom for Assange and Manning

About 70 people joined a lively and informative rally in Brisbane’s central Reddacliff Place on Saturday demanding freedom for WikiLeaks founder Julian Assange and the brave young whistle blower Chelsea Manning. The event was co-sponsored by the Julian Assange Brisbane Queensland group and the Socialist Equality Party.

The rally was held in the wake of the brutal treatment of Assange during the opening week of his US extradition hearing in London. An enthusiastic and appreciative audience of workers, retirees, students and young people, some of whom had travelled some 200 kilometres from northern New South Wales, applauded and cheered the speakers as they denounced the Australian government’s complicity in the abuses of Assange’s basic legal rights.

Alyssa Porter, who co-founded the Julian Assange Brisbane group late last year after being outraged by Assange’s arrest, chaired the rally. She said those present were taking a stand against war and the persecution of the courageous individuals who had exposed war crimes.

The opening speaker was John Urane, the other co-founder of the Brisbane Assange group. He recalled the lies and propaganda that the public was fed, by US Republican and Democrat leaders alike, during the US-led wars in Vietnam, Iraq and Afghanistan. He said the Washington elite and its allies had such an immense hatred of Assange because he had exposed their crimes, and held up a mirror showing their true faces. Speaking at the invitation of the Brisbane Assange group, Andrew Bartlett, a former Australian Democrats and Greens senator, said that when he was in Canberra he had asked members of parliament why they were not all speaking out in defence of Assange, an Australian citizen who faced being tortured and locked up for life.

Bartlett said their answers, that Assange was “not popular,” was a sad indicator of the worsening political culture. He warned of a slide into authoritarianism and totalitarianism. He concluded by urging people to put pressure on every MP, regardless of their party, to speak out and “at least ensure a fair trial” for Assange.

The next speaker was Phillip Adams, the organiser of one of Australia’s largest-ever parliamentary petitions, now signed by 306,000 people, calling for the defence of Assange. Despite this strength of feeling, he said, the Australian government was still “silently complicit” in the torture of the WikiLeaks journalist. Adams said politicians needed to realise “how the citizens would react” if Assange were to die in custody or were to appear trussed up in a Guantanamo Bay-style orange imprisonment suit. 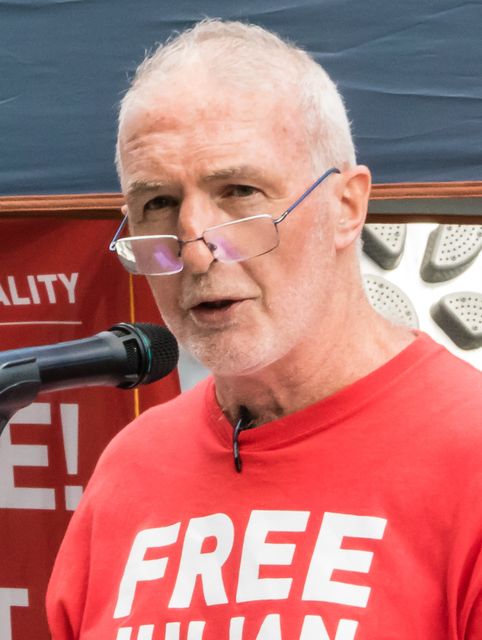 World Socialist Web Site correspondent Mike Head pointed to the intimidating and oppressive measures used against Assange during the first week of the extradition hearing. Assange was handcuffed multiple times, stripped naked, had his legal documents confiscated by prison authorities, moved to five different cells and kept boxed in a glass cage in the courtroom, unable to properly communicate with his lawyers.

“These vindictive measures demonstrate the viciousness of the British legal system and of the three governments centrally involved in his persecution—those of America, Britain and Australia,” Head said. Any hopes that the week’s hearing would end in a legal victory for Assange had been dashed, as were hopes that the visit of two Australian MPs to London would convince British Prime Minister Boris Johnson to reverse course and release Assange. 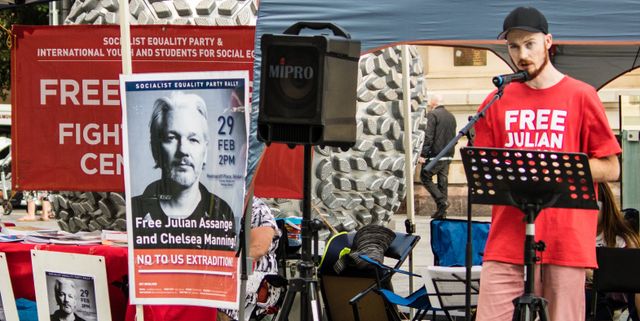 International Youth and Students for Social Equality member Michael Smith highlighted the re-arrest and indefinite detention of Chelsea Manning for refusing to testify against Assange, despite the enormous personal and financial cost she was paying as a result of her stand on principle.

“Chelsea Manning is a heroic and courageous person and her persecution is an immense crime, which, along with the persecution of Assange, must be brought to an end by workers and youth,” he said.

On behalf of the Socialist Equality Party, James Cogan spoke on the political perspective required to free Assange and Manning. 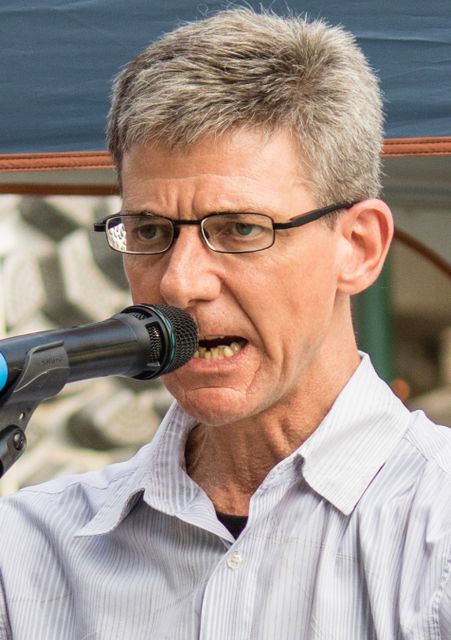 “The contempt of the Liberal-National Coalition government and the Labor Party for the anti-war sentiment of the population and for the rights of Julian Assange is no different from their callous and illegal treatment of refugees, or their indifference over the impact of global warming for the lives of millions of working-class people, which was demonstrated so starkly over recent months as fires raged across much of the continent,” Cogan said.

“Petitions signed by hundreds of thousands of people calling on the government to act on Assange’s behalf have been ignored, and his case has been largely censored from the media, because to raise the issue could affect relations with Washington and the US-Australia military alliance.”

Cogan emphasised that the defence of Assange and Manning would be a protracted political struggle and that winning their freedom depended upon the building of an independent and international movement of the working class. He urged all those participating in the rally to raise this critical issue throughout the working class by forming defence committees in workplaces, universities and local communities, passing motions and organising campaigns and information stalls.

After the rally, Penny told the WSWS she had learned a lot from the rally. “I recently became a socialist and today is my first rally. I feel very strongly about social change. I am really interested in Assange and internet censorship, and everything that was spoken about today. I think it is so important to create social equality. There are so many topics that can be explained to young people, especially about the wars we are in.”

Asked how Assange could be freed, Penny commented: “Being informed and educated about as much as you can is really good. The younger generations can create their own force, through their occupations and within themselves, to make change.” 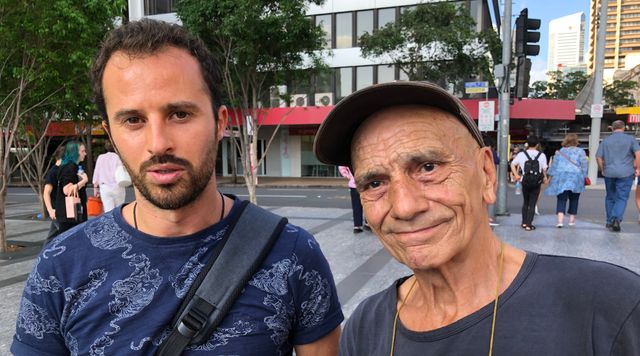 Simah and Louis had travelled from northern NSW for the rally. Simah said: “We came to show some support for Julian. He’s in a critical situation at the moment… I’ve been watching this for years, and known about the important work done by WikiLeaks to keep the news real. It is the only unfiltered media that we have access to, and Julian’s been the driving force behind it. He’s just been a good journalist. That’s all he’s done—been an honest, genuine journalist. He should not been punished for that.”

“We need to speak up. People need to step up and realise what’s going on. If this can happen to him, it can happen to anyone… No one will be safe. Anyone who speaks out or tries to be honest or a genuine journalist can end up with a death sentence, or life in jail.” 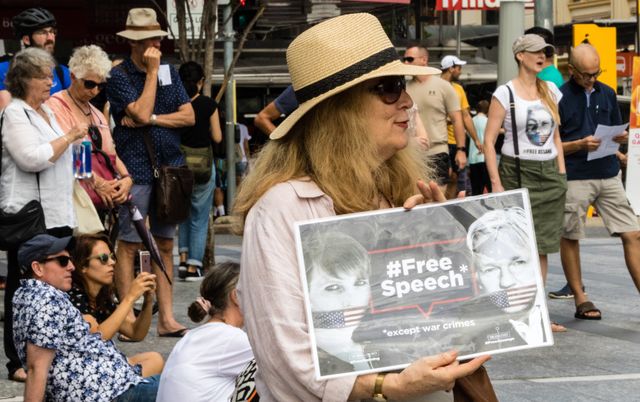 Part of the rally in Brisbane

Louis, a former journalist, said what is happening to Assange is “a nail in the coffin of free speech and democracy and journalism as I know it.” He spoke of the demise of independent and quality journalism, with the media, including the Australian Broadcasting Corporation, now dominated by “conservatives,” such as Rupert Murdoch.

The demonising of Assange was “worse than the illegal Iraq war, based on lies about weapons of mass destruction,” Louis said. “This is equally based on lies. It is the biggest stitch-up and frame-up I’ve ever seen as a journalist… If an Australian journalist can be arrested and tried and humiliated anywhere in the world like this, there is no future for open democracy.”

Louis said that was why he was so passionate about this, and frustrated by the silence of the trade unions and the Labor Party, as well as the Liberal-National government. He said the British and Australian governments were committed to the wars conducted by the US for oil, geo-political strategies and to defend vested interests. “This is evil and dark,” he said.