Defender 2020: Largest mobilisation of NATO troops against Russia in 25 years

The largest deployment of troops across the Atlantic in 25 years entered its main phase last weekend within the framework of the Defender Europe 2020 exercise. The scale of NATO's provocative military exercise underscores how far advanced the preparations for war are 75 years after the end of World War II.

The United States and 18 other countries are deploying large contingents of troops from America and Western Europe to the Russian border within a short period of time. In total, around 37,000 soldiers are participating in the exercise, which is to continue until June. Their objective is Poland and the Baltic states.

The freight ship Endurance docked in Bremerhaven last week together with four other vessels carrying US tanks and other heavy military equipment. The US alone is deploying 20,000 troops and their armaments to Europe. 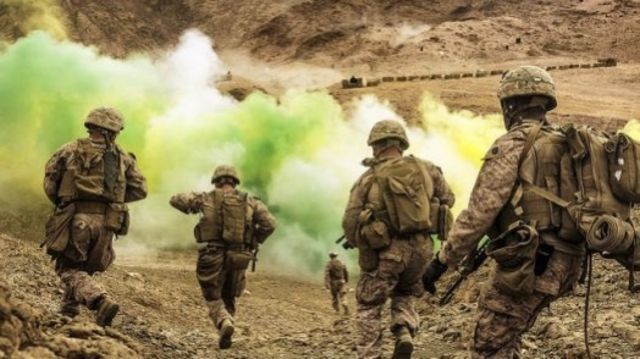 Stand-alone infrastructure is being established to facilitate the troop movements. The German army has established a central transport control centre, set up tent camps on military training grounds, and deployed mobile refuelling stations. Although the kilometres-long convoys are generally on the move during the night, they are causing significant disruption to transport.

The German army has remained silent on the cost of the exercise. Referring to sources in the army, the Tagesspiegel newspaper estimates that the cost will be €2.5 million in Germany alone. “This needs analysis by the parts of the armed forces involved based on the deployment of equipment and personnel, accommodation, and the provision of infrastructure. Additionally, further costs could arise,” wrote the Tagesspiegel .

A spokesman for the US military stated that the countries involved would invest in military infrastructure. As an example, he referred to Lithuania, which like Germany is investing in the expansion of its railway network for heavy cargo.

Of the 37,000 soldiers from 19 countries involved in the exercise, more than half, 20,000, come from the United States. 4,000 German soldiers are taking part. In addition, police units are protecting the transportation of materials. Alongside around 33,000 vehicles and containers, some 450 tanks will deploy to the Russian border. Over 100 rail transportation trips will take place. Overall, the troops will move through seven countries and use 14 airports and ports.

Germany is the main hub of the exercise. In the first phase, which runs until April, American weaponry and military equipment will be deployed in Germany, Belgium, and Poland. In stage two, which will run partially in parallel until May, troops will be deployed through Germany to Poland. In the final phase prior to the main exercise all remaining troops will be deployed from Germany to Poland and the Baltic states. The final exercise will take place in Bergen on the Lüneburger moors, Germany, at the end of May, before the withdrawal of all forces is completed by the end of July.

The manoeuvre builds on military exercises held well into the 1990s in Western Europe, some of which involved up to 130,000 troops. Now, for the first time, such a large-scale exercise is being carried out right up to the Russian border and on former Soviet territory.

The manoeuvre is designed to send a message of deterrence, according to the German and US militaries. Lt. Gen. Martin Schelleis commented on this, “The reality is that Russia, with its illegal annexation of Crimea in 2014, provoked this development. But Russia is not the pretext for the exercise; military capacity can only be rebuilt and maintained over an extended period of time.”

NATO's European supreme commander Gen. Tod D. Wolters described the exercise as a “platform to strengthen the readiness and interoperability of allied forces.”

Like the Sabre Strike exercise in Lithuania in 2017 and Trident Juncture in 2018, the current manoeuvre aims to test the capacity to rapidly deploy combat-ready troops and equipment to the Russian border, before the “alliance case” is put to the test in a series of combat simulations.

The advanced character of the preparations for war with Russia was underscored last week when US Defence Secretary Mark Esper participated in a war game at the US Strategic Command in Omaha, Nebraska, during which the firing of nuclear weapons against Russia was simulated.

The US military stated that the war game involved an unexpected incident in Europe during which a war is being waged on Russia, and Russia decides to fire a small-scale nuclear weapon on a location in NATO territory.

Two exercises will take place in Latvia on the border with Russia during the early part of this year. A Swift Response Training involving Latvian and international troops will run between April and May. Military units from the United States, Britain, Italy, and Spain will practice aerial manoeuvres in case of a sudden threat.

However, it is not only the Trump administration that is speaking the language of war. Germany and the European powers are attempting to emerge militarily from the shadow of the United States.

This applies above all to Germany. In his speech at the recent Munich Security Conference, German President Frank-Walter Steinmeier complained that Russia had annexed Crimea without any regard for international law. Moscow “used military force and the violent redrawing of borders on the European continent as legitimate policy options.”

“Observing is insufficient,” declared Annegret Kramp-Karrenbauer, Germany's defence minister, who spoke in Munich on the topic of “Defending the West.” On this issue, she stated her “full agreement” with French President Emmanuel Macron, who called at the Munich Security Conference for a more independent European military policy. The Europeans must not simply “describe their weaknesses, comment on the actions of others or complain about them, but also conduct much more strategic dialogue in Europe and do something concrete for our security.” Germany in particular is “obliged to develop a greater capacity to act and a willingness to take action.”

All political parties in Germany support this drive to war. The formerly pacifist Greens are no exception to this. With their typical demagogy, they have sought to turn events on their head and present the current NATO exercise as a contribution to disarmament. Green party defence spokesman Tobias Lindner stated that one successful outcome of the exercise would be that a permanent stationing of more US troops in Germany and Europe would not be required.

Russia, which was given the assurance 30 years ago when Germany was reunified that NATO would not expand into eastern Europe and certainly not onto former Soviet territory, has responded with alarm to the latest provocation. Foreign Minister Sergei Lavrov remarked, “Of course we will respond. We can't ignore developments that cause us concern. But we will respond in a way that does not create any unnecessary risk.”

Socialism and the Fight Against War
[18 February 2016]