Workers shut production in auto plants throughout Michigan and Ohio, in defiance of UAW and management

Shut down all non-essential production to halt the spread of the coronavirus! Distribute our statement, “How to fight the COVID-19 pandemic: A program of action for the working class” and form rank-and-file committees at your workplace. For assistance and to distribute information about actions workers are taking at your plant, contact us immediately at autoworkers@wsws.org or on Facebook.

Update 1:25 PM EDT: The Detroit Free Press is reporting that General Motors, Ford and Fiat Chrysler will shut down all US plants. More information will be posted as it becomes available.

Workers at Fiat Chrysler’s Sterling Heights (SHAP) and Jefferson North (JNAP) assembly plants in Metro Detroit took matters into their own hands last night and this morning and forced a shutdown of production to halt the spread of coronavirus.

The work stoppages began at Sterling Heights last night, only hours after the United Auto Workers and the Detroit automakers reached a rotten deal to keep plants open and operating during the global pandemic. Faced with a fait accompli and with the union, which had temporarily prevented a walkout at Warren Truck on Monday and Tipton Transmission on Tuesday, having completely lost control of the situation, management sent workers on the night shift home early at 10:30 p.m. local time.

This morning, workers on SHAP’s first shift followed suit, staged a sit-in and refused to touch vehicles rolling down the line once their shift began. Because hundreds of people handle the vehicles in rapid succession on the assembly line, they are a major potential source of transmission for the virus. Management again sent workers home and canceled the second shift today. “This is awe-inspiring,” one young SHAP worker told the WSWS Autoworker Newsletter, referring to the workers’ action to force the closure of the plant.

Workers also stopped working at JNAP this morning at around 10:30 a.m. Workers reporting for the morning shift have refused to work for more than an hour. Workers have told the WSWS Autoworker Newsletter that managers have threatened them with firings, with no opposition from local UAW officials, and some have returned to their workstations but are refusing to handle vehicles on the assembly line. “The union sold us out. We don’t need rotating shifts—we have to shut down the plants. They don’t even care about us and our families—the UAW showed that last night.” Management finally relented at 1:00 PM and sent the shift home. 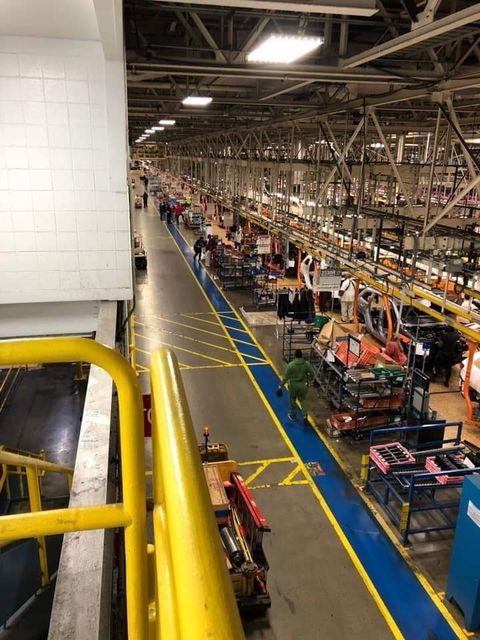 A Facebook Live video from Toledo showed dozens of furious workers crowded around Local 12 Vice President Brian Sims, demanding that the plant be shut down, who then retreats through the back door yelling at workers to "calm down."

Reeling from the independent action taken by workers, Fiat Chrysler is fully engaged in damage control. Representatives for the company flatly denied that a walkout at SHAP has occurred, even though local news media filmed the walkout, and claimed that workers were sent home as a “precaution.” By canceling a few shifts management clearly hopes that they will buy time for the UAW to restore order. But all signs indicate that the situation has already rapidly spiraled out of their control.

Only yesterday, the UAW worked with management to successfully browbeat hundreds of workers at FCA’s Tipton Transmission near Kokomo, Indiana into reporting for work, threatening them with immediate termination for job abandonment. On Monday, the union also managed to keep a temporary stoppage at Warren Truck Assembly’s paint shop from developing into a full-scale lockout. But the shabby maneuver last night reached in the joint company-union coronavirus “task force,” which potentially exposes 150,000 autoworkers to infection, has made clear that that the UAW will do everything to enforce management’s dictates, even at the cost of hundreds, or even thousands, of lives.

This is a developing story and the World Socialist Web Site will continue to provide updates during the day. But it is clear that these actions will be the first of many throughout the United States. A wildcat strike wave has already overtaken much of the European auto industries, with walkouts occurring in Spain and Italy in defiance of management-union attempts to keep them on the job during national lockdowns. Canadian autoworkers also temporarily stopped production at Windsor Assembly last week.

This wildcat wave must be made the tip of the spear for a movement of the entire working class to shut down all non-essential production. To organize this, workers must form rank-and-file committees, completely independent of and in opposition to the unions.

A rational response to the pandemic is blocked by the capitalist profit motive. Workers must demand a massive, globally coordinated response to the pandemic, taking trillions of dollars of wealth hoarded by the rich and the major corporations and placing them at the disposal of society. We urge workers to read and discuss the Socialist Equality Party’s program of action to fight the COVID-19 pandemic.

To organize such committees in your workplace and to get in touch with other workers, contact us at autoworkers@wsws.org .