Message from big business on coronavirus pandemic: Save profits, not lives

As the coronavirus pandemic continues to spread throughout the world, and as reported cases in the United States increase at a faster rate than in any other country, a definite line is emerging from the American ruling class: “The cure is worse than the disease.” In other words, the lives of millions of workers must be sacrificed in the interests of corporate profit.

“We cannot let the cure be worse than the problem itself,” Trump declared on Twitter Sunday evening. “At the end of the 15-day period [that began one week ago], we will make a decision as to which way we want to go.”

At his news conference Monday, Trump said that he wants American businesses to reopen in a matter of “weeks, not months… At a certain point, we have to get open and we have to get moving. We don’t want to lose these companies…”

Downplaying the significance of the pandemic, which is already overwhelming health care systems in the US, Trump added, “We have a very active flu season, more active than most… And you look at automobile accidents, which are far greater than any numbers we’re talking about. That doesn’t mean we’re going to tell everybody no more driving of cars. So we have to do things to get our country open.”

If millions of people die, so be it. It is a cost of doing business. So declares the corporate and financial oligarchy. Lloyd Blankfein, the former CEO of Goldman Sachs, wrote on Twitter that it was necessary “within a very few weeks to let those with a lower risk of the disease return to work.” 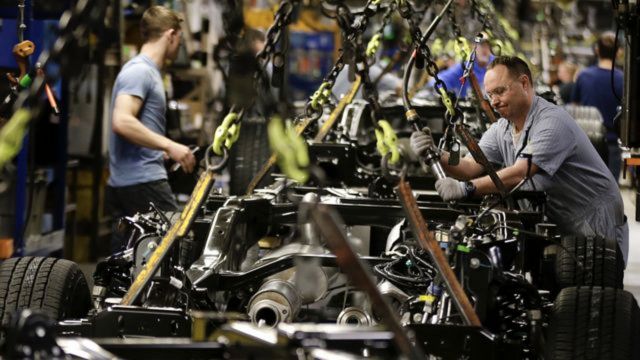 An autoworker prepares a chassis to receive an engine on a new aluminum-alloy body Ford F-150 truck at the company's Kansas City Assembly Plant in Claycomo, Mo. (AP Photo/Charlie Riedel)

These statements came as Wall Street suffered a further fall on Monday, dropping to the lowest levels since Trump was elected in 2016, despite the infusion of unlimited sums of cash to the financial markets by the US Federal Reserve.

The move by the ruling class to quickly end restrictions on business operations to boost Wall Street defies the recommendations of epidemiologists and doctors. The New York Times, in an article posted Monday night, wrote that “Trump, Wall Street executives and many conservative economists began questioning whether the government had gone too far,” even though “relaxing those restrictions could significantly increase the death toll from the virus, public health officials warn.”

The Times failed to note, however, that among those leading the “back to work” campaign is the editorial page of the New York Times itself, the media outlet for the Democratic Party. The most explicit argument for letting people die in the name of “economic growth” came from leading Times columnist Thomas Friedman.

In a column published Monday, Friedman asks, “But as so many of our businesses shut down and millions begin to be laid off, some experts are beginning to ask: ‘Wait a minute! What the hell are we doing to ourselves? To our economy? To our next generation? Is this cure—even for a short while—worse than the disease?’”

Friedman’s column stacks one lie on top of another.

Lie #1: It is impossible to contain the disease

Friedman argues that governments should abandon efforts to contain the pandemic. He writes that “at this stage there is no way of avoiding the fact that many, many Americans are going to get the coronavirus or already have it. That ship has sailed.” He goes on to cite fellow Times contributor David L. Katz, who declares “we missed the opportunity for population-wide containment.”

The World Health Organization (WHO), the globally recognized authority on infectious disease, has been clear that the abandonment of efforts at “containment” of COVID-19 is inappropriate and unacceptable. “The idea that countries should shift from containment to mitigation is wrong and dangerous,” said the organization’s director-general, Tedros Adhanom Ghebreyesus.

Based on this range of possible outcomes, Friedman’s proposal to allow the majority of the population to be infected with COVID-19 would be purchased with between one million and 18 million lives.

Lie #2: Social distancing does not save lives

Friedman takes an even more reprehensible step, not just arguing against efforts to contain the pandemic through contact tracing, isolation and quarantine, but demanding the end of social distancing measures in the name of preserving the “economy.”

Friedman argues that “governors and mayors, by… basically sending everyone home for an unspecified period, might have actually increased the dangers of infection for those most vulnerable.”

This is yet another false and unsubstantiated statement, totally at odds with the guidance of the WHO, which has endorsed social distancing as necessary to save lives by keeping hospitals from being overburdened.

Friedman continues, “But we also need to be asking ourselves—just as urgently—can we… maximize the chances for as many Americans as possible to safely go back to work as soon as possible. One expert I talk to below believes that could happen in as early as a few weeks.”

That “expert” is Dr. David L. Katz, whose published works include Dr. David Katz’s Flavor-Full Diet: Use Your Tastebuds to Lose Pounds and Inches with this Scientifically Proven Plan. Katz has promoted the quack science of homeopathy and “energy medicine,” declaring that the medical profession must embrace “a more fluid concept of evidence.” Surgical oncologist David Gorski has argued that Katz specializes in seeking “to ‘integrate’ pseudoscience with science, nonsense with sense, and quackery with real medicine.”

In an earlier column in the Times, Katz argued for “most of society to return to life as usual and perhaps prevent vast segments of the economy from collapsing. Healthy children could return to school and healthy adults go back to their jobs. Theaters and restaurants could reopen.”

Friedman, citing Katz, argues “as with the flu, the vast majority will get over it in days, a small number will require hospitalization and a very small percentage of the most vulnerable will, tragically, die.”

In fact, economic activity necessary to the functioning of society can be sustained under safe conditions with a massive investment in infrastructure. All non-essential production can be shut down for a period of time necessary to contain the pandemic. However, this requires that the principle determining all the actions of governments—the profit interests of the rich—be eliminated from all consideration.

The statements of Katz and Friedman have been condemned by leading epidemiologists. In a letter to the Times, a group of four Yale epidemiologists, Sten H. Vermund, Gregg Gonsalves, Becca Levy and Saad Omer, slammed Katz’s “suggestion that the global community is overreacting to Covid-19,” declaring that “he favors letting the pandemic run its course.”

Gonsalves, an assistant professor of epidemiology at Yale, who has spent decades researching infectious diseases, was even more direct on Twitter, declaring that neither New York Times op-ed editor Jim Dao nor editorial page editor James Bennet thought of “talking to an infectious disease epidemiologist about any of this before publishing this irresponsible garbage.”

He wrote that the articles by Katz and Friedman “are going to undermine public health efforts with a bunch of hot air, based on no evidence, no analysis full-stop.”

He continued: “In the @WhiteHouse we have @realDonaldTrump who botched the response to the epidemic, @nytimes we have entitled upper-middle class men who know little more than the President does and like him, love to say what’s on their minds. You should be ashamed of yourselves: @DrDavidKatz @tomfriedman @jimdao & @JBennet.”

The New York Times is deliberately promoting quack science during a pandemic and putting lives at risk. These actions have a definite social content. Like Trump, the primary concern of the Times is to reopen businesses and pump up the value of the stock market, at any cost. If it means that the workers forced to toil in unsafe conditions “will, tragically, die”—so be it.

There is an underlying logic to this process. The massive infusion of credit into the financial system must be supported by the extraction of surplus value from the working class.

The lifting of mandatory quarantines will do little to get people to shop and go to restaurants. But not working will be treated as an individual decision, making workers who refuse to work under unsafe conditions ineligible for unemployment insurance.

From the beginning, the ruling class has viewed the pandemic not as an issue of public health, but as a potential impediment to generating profit. Its sole concern has been how the crisis will impact its bottom line. Now that it has secured a massive government bailout, the ruling class wants to ensure that business returns to normal.

This form of socially sanctioned euthanasia has a distinctly fascistic character, not dissimilar to the argument by the Nazis that the disabled were “undesirable” elements who should be eliminated. In the face of the greatest crisis facing American capitalism, the ruling class is revealing itself to be not just parasitic, but homicidal.

This policy arises out of the unchallenged assumption that no measures can be taken that impinge upon the profit system. Even in the midst of a global pandemic, which threatens the lives of millions, the priority of world governments and their media flunkies is to defend, at all costs, the wealth of the ruling class and the interests of the corporate-financial elite.

All the economic resources of society must be mobilized now to fight the pandemic, not salvage Wall Street! The demand of the ruling class that workers sacrifice their lives and the lives of their families by returning to work, to be realized by force if necessary, will generate enormous opposition.

The development of mass opposition to the demands of Wall Street, the media and the Trump administration must be based on an understanding that the fight against the pandemic, and the implementation of policies to secure the health and safety of workers, is at the same time a fight against capitalism.