As Detroit surges past 2,000 cases, COVID-19 pandemic spreads throughout Michigan

The epicenter of the coronavirus in Michigan continues to be the City of Detroit, as the number of confirmed cases surged to 2,080 and the number of deaths reached 75 on Tuesday. Wayne County, where Detroit is located, now has 3,735 confirmed cases and 120 deaths, which represents approximately half the total cases (7,615) and deaths (259) in the state.

Michigan now has the third most cases and deaths from COVID-19 in the US, surpassing California on Tuesday and behind only New York and New Jersey.

Oakland County, which is directly north of Wayne County and is separated from the northern border of Detroit at 8 Mile Road, has the second largest number of cases in the state at 1,591 and 70 who have died from the virus. Oakland County has 62 cities, townships and villages within it and a total population of 1.2 million.

The Oakland County government has published an interactive map on its website showing the number of confirmed coronavirus cases in the county by zip code. While there are cases in nearly every one of the more than 50 zip codes in the county, the communities with the greatest number of cases are located in the cities of Southfield, Oak Park and West Bloomfield. 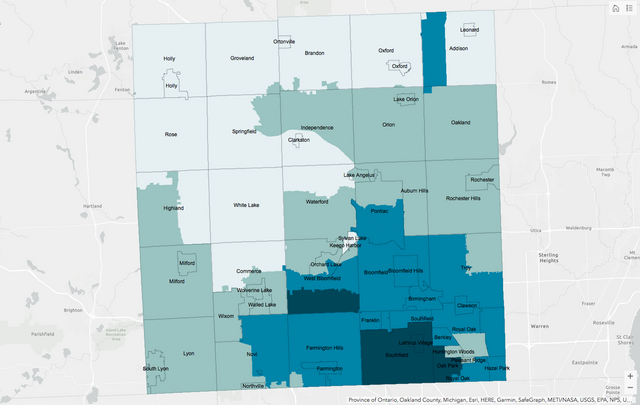 Oakland County Michigan has published an interactive map that displays the population and number of people with coronavirus within each zip code in the county.

Although there are no publicly available statistics on coronavirus cases in Pontiac, the interactive map indicates that the number of confirmed cases in the county seat of Oakland County is now at 73. Pontiac, like Detroit, is a city dominated by poverty and destruction of social conditions for the working class population, connected with the destruction of the auto industry over the past five decades.

Significantly, the government of Pontiac—with a population of 60,000 people—is not providing residents with any updates on COVID-19 pandemic statistics on their city website.

As has been explained by epidemiologists and public health experts, the fact that there is no systematic and mass testing of the public for the presence of the virus, the reported numbers of confirmed cases are very deceptive. According to the Michigan Department of Health and Human Service (MDHHS), there have been 25,711 people tested as of Tuesday in Michigan, merely 0.25 percent of the state’s population.

While the tricounty Detroit metropolitan area of Wayne, Oakland and Macomb counties has more than 80 percent of both the total confirmed cases and deaths in the state, there are many indications that the pandemic is spreading rapidly in other population centers in the state, such as Ann Arbor, Flint, Lansing and Grand Rapids.

Washtenaw County, where Ann Arbor is located, has 305 confirmed coronavirus cases and seven deaths, the next highest concentration of cases outside of metropolitan Detroit. The shutdown of classes and on-campus housing at the University of Michigan on March 11 reduced the population of Ann Arbor by approximately 45,000.

There are currently 88 coronavirus patients being treated in hospitals located in Washtenaw County. Last week, two people, who had been staying at the Delonis Center homeless shelter in Ann Arbor, tested positive for COVID-19, and 10 others were quarantined on the second floor of the shelter, with some awaiting test results.

On Tuesday, the county health department announced that homeless people who test positive will be relocated on Wednesday, April 1, to an emergency shelter being set up at an undisclosed area hotel that will include onsite staff.

Indicating that the virus is spreading throughout the population, the Washtenaw County government posted the following notice on its website: “Because there is evidence of community spread, the Washtenaw County Health Department is no longer naming public low-risk exposure locations. Residents can assume there is a possibility the virus may be present when they are in public places in the community. The Health Department is not announcing evidence of community spread to cause panic, but to reinforce that people should be taking all recommended prevention measures.”

Speaking at a press conference last week, the Health Officer for Genesee County, John McKeller, said he was awaiting 156 coronavirus test results from county residents, and the health department was anticipating that “what’s happening in Detroit will make its way up north.” Genesee County, which includes the city of Flint, is located approximately 60 miles northwest of Detroit, and MDHSS reports a total of 185 confirmed cases and seven deaths from COVID-19 in the county.

A woman who tested positive, along with a group of others who came into contact with her, were forced to leave the Center for Hope homeless shelter in Flint last week. Mary Stevenson, volunteer services coordinator for the center, said the facility was notified by a local hospital that one of their guests was “presumptive positive.” The group was asked to leave, their belongings were placed in a trash bag, they were given a “blessing bag” tote with food items and a blanket and then everything was set outside on the curb.

The county statistics for the number of COVID-19 cases in Lansing are deceiving since the state capital straddles Ingham (91), Clinton (24) and Eaton (21) counties. The combined total for these counties is 135, and at least 110 of these are in the city of Lansing.

Ingham County includes East Lansing, the location of Michigan State University. The university had already announced that classes for the Spring semester were being completed online at the time that the first student was confirmed with COVID-19 on March 14.

Linda Vail, MPA, Health Officer for the Ingham County Health Department, told the local news media, “This virus has spread in the community.” Vail also said the numbers for the county were rising rapidly because test results were finally coming in. “But these numbers underestimate the real prevalence of the disease in the area. This is our official count of cases. Some are home sick and not going out for testing [that] is recommended in most cases of mild illness, so there are definitely more cases in the community than that.”

The city of Grand Rapids, located 160 miles northwest of Detroit, is in Kent County which currently has 108 confirmed cases of the coronavirus and one death. In the last two days, the number of cases in the county has increased by 30 percent and 27 percent respectively.

Kent County Administrative Health Officer Adam London said during a Facebook video on Sunday that numbers would likely continue to increase, potentially dramatically, in the coming days. “Some people, unfortunately, in our community are going to get hurt, and that’s tragic and totally unacceptable to all of us, but it’s the reality,” said London.

A nursing home in the town of Cedar Springs, located in Kent County, reported Tuesday that 31 residents and five staff members have tested positive for the virus. The company managing the nursing home, Metron of Cedar Springs, released a statement that said: “We have been working closely with local, state and federal health departments. As a member of Spectrum Health’s High Performing Network, we have also been in continuous contact with the health system, its doctors and staff. We are taking all necessary measures to ensure the safety and protection of our residents, staff and community.”

A woman whose mother is housed at the facility and tested positive for COVID-19 told News-8 that visitors were banned weeks ago at the beginning of the COVID-19 outbreak in the US. An employee at the nursing home said, “I just want to make sure that my job is secure and that I can stay home,” worrying that the only two options are “bringing a virus home or not going into work and being let go.”