Coronavirus deaths in US nearing 4,000 as Trump washes his hands of responsibility

The coronavirus killed at least 812 people in the United States Tuesday, the highest death toll since the pandemic began, while nearly 25,000 new cases were reported, bringing the total number infected to more than 188,000, the largest number in the world by far.

The US death toll has not yet reached the level of Italy (12,428) or Spain (8,464), but that is only a matter of days. And White House officials continue to escalate their projections of the total number of deaths in a “best-case” scenario, setting the figure at a staggering 240,000, with Trump himself hinting that the total could be double that. 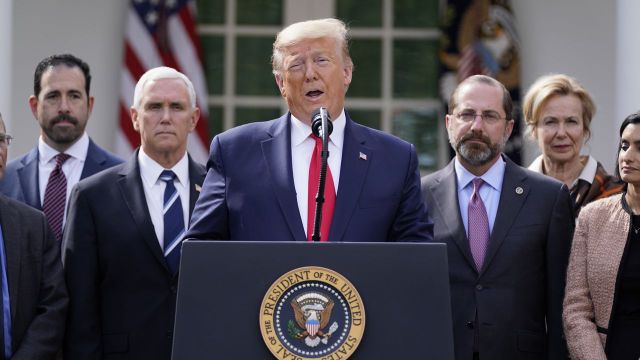 President Donald Trump speaks during a news conference about the coronavirus in the Rose Garden of the White House, March 13, 2020, in Washington [Credit: AP Photo/Evan Vucci]

Four countries—Italy, Spain, the US and France—have now seen more deaths than China, where the epidemic first broke out in the city of Wuhan last December. After 3,305 deaths, China claims to have largely suppressed the outbreak through systematic testing, contact tracing and quarantining of those exposed to the coronavirus.

The American media and the Trump administration continually describe efforts to counteract the coronavirus as a war, where the frontlines are being drawn in emergency rooms and ICUs throughout the United States, and especially in the New York metropolitan area, where half of all COVID-19 cases are located. On Tuesday the death toll in New York City itself hit 1,096, and 10,000 people were hospitalized, with 2,700 of them requiring ventilators.

But in this war, under the incompetent “commander-in-chief” Trump and his hapless lieutenants among the state governors, the troops are being sent into battle haphazardly, without weapons, and largely without regard for their own safety. Healthcare workers lack sufficient personal protection equipment, and they are being infected and incapacitated at an alarming rate, with many deaths.

In Spain, the healthcare workers accounted for 14 percent of the country’s cases, while in Italy, they accounted for 10 percent. The same process is under way in the United States. NPR reported that 345 employees of Boston’s four largest hospitals have tested positive for COVID-19. In New York City, hundreds of workers have fallen ill. At Columbia University Irving Medical Center in Manhattan, 50 percent of the intensive-care staff have been infected.

The result is that in addition to the shortages of hospital rooms, ICU beds, masks, and ventilators, there is a growing shortage of medical staff who can cope with the increasing volume of patients seeking medical attention.

Meanwhile, hospitals and healthcare systems are threatening doctors and nurses who make their concerns over working conditions public. An emergency room physician, Dr. Ming Lin, in Washington state, was fired because he gave an interview to a newspaper complaining about inadequate protective equipment. Ruth Schubert, a spokeswoman for the Washington State Nurses Association, told Bloomberg, “Hospitals are muzzling nurses and other healthcare workers in an attempt to preserve their image.” Nurses who have spoken under conditions of anonymity with WSW S reporters said that they have been told they would be fired if they talked to the media.

In some cases, state governors have made statements that amount to a confession of bankruptcy. On CNN Live, Governor Larry Hogan of Maryland said, “We are all trying to get more testing, but this is a pinch point on testing, on supplies, and materials, and PPE and ventilators. Everybody in America knows we don’t have enough of these things … and without the tests we are really flying blind. We are guessing about where the outbreaks are, what the infection rates in the hospitals are, and the mortality rates.”

However, the Trump White House manages to combine moronic expressions of optimism (largely in the form of testimonials to Trump’s personal genius) with ever more ominous declarations that the death toll in the United States will reach six or even seven figures.

On Sunday, White House adviser Dr. Anthony Fauci said that 100,000 to 200,000 deaths was a midrange figure that could be substantially lowered if proper measures were taken. On Monday, White House coronavirus coordinator Dr. Deborah Birx said that 100,000 to 200,000 was now the floor, the best-case scenario if everything went perfectly, while Trump himself declared that a death toll in that range would represent “a good job” by his administration.

On Tuesday, Fauci and Birx presented a slide show to a press briefing indicating projections that without severe mitigation, total deaths due to COVID-19 could reach 1.2 million to 2.2 million. Birx admitted that even with strict mitigation efforts throughout the month of April, the number of deaths could range as high as 240,000. At the peak of such a “best-case” outcome, 4,000 to 5,000 people would be dying every day.

Shocking as such figures are, even more outrageous is the blithe indifference displayed by Trump personally and his closest aides to the likely results of their own policy of refusing to conduct a serious struggle to contain the pandemic, not merely mitigate it.

Trump himself, towards the end of the press “briefing” that lasted more than two hours—a clear indication, in and of itself, that the White House antivirus campaign is an exercise in political propaganda and media manipulation—made comments that amounted to a self-indictment for criminal negligence on a monumental scale.

“We’re going through the worst thing this country has probably ever seen,” he said. “Look, we had the Civil War. We lost 600,000 people, right? Had we not done anything, we would have lost many times that, but we did something, so it’s going to be hopefully way under that. But you know, we lose more here potentially than you lose in world wars as a country.”

There was remarkably little push-back from the journalists of the corporate media who appeared to be in a daze. While several media outlets had taken note that on Tuesday morning, more Americans had died from coronavirus than were killed in the 9/11 terrorist attacks, not even this comparison, inadequate as it is, was made.

The US government’s response is best characterized as malign neglect to a pandemic that was both foreseen and preventable. With complete indifference to the fate of the people, the Trump administration’s primary focus was on ensuring the financial markets were protected. Only when the markets began to implode did the government’s machinery begin to churn to prevent its complete collapse. Everything else was deemed an afterthought.

First, on March 3, the Federal Reserve slashed rates by 0.5 percent, the most significant cut since the 2008 financial crisis. On March 12, the Federal Reserve added $1.5 trillion of liquidity into the banking systems by massively expanding short-term loans to the banks to keep money markets stable and provide banks with cash in hand. When the markets continued to plummet on March 15, the Federal Reserve cut interest rates by a full percentage point down to almost 0.00 percent. They also resumed quantitative easing by purchasing $500 billion in treasuries and $200 billion in mortgage-backed securities. Then Congress rushed through a record $2.2 trillion economic “rescue” bill, whose main purpose was to provide the Treasury and the Federal Reserve the necessary authority to bail out corporate America and Wall Street.

Comparing the gargantuan and energetic efforts to save the markets with the slapdash, indifferent and grossly incompetent actions in relation to public health, it is easy to see what are the priorities of the American financial aristocracy.

But there is another force to be heard from in this crisis—the working class. Instacart, Amazon, and Whole Foods workers have initiated strike actions against forced work under unsafe conditions. Workers at General Electric have protested, demanding their company begin producing ventilators. Many other workers are rebelling against being forced to remain on the job without protective gear.

As the crisis escalates, the decisive question is for the working class to develop a conscious political response, recognizing that it must fight the capitalist system as a whole, based on a socialist program.

The coronavirus pandemic and the perspective of socialism
[30 March 2020]