Bernie Sanders ends campaign, calls on supporters to back Biden

Vermont Senator Bernie Sanders ended his campaign for president in the Democratic Party primaries on Wednesday and called on his supporters to back former Vice President Joe Biden.

“Today I congratulate Joe Biden, a very decent man, who I will work with to move our progressive ideas forward,” Sanders said in a fifteen-minute video posted on Twitter. When Biden is selected as the nominee at the Democratic Party convention, Sanders added, “then together, standing united, we will go forward to defeat Donald Trump.”

In explaining his decision to drop out, Sanders said that he saw no path to victory in the primaries. Sanders’ motivation, however, is not that his campaign is hopeless in an electoral sense. Rather, he is responding to the explosive social and political situation in the United States. 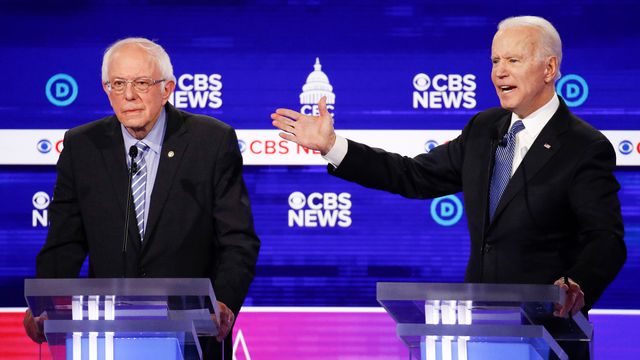 Sanders is dropping out and calling for “unity” behind Biden under conditions in which the political crisis of the Democratic Party and the entire political system has reached a breaking point.

The coronavirus pandemic is exposing the irreconcilable conflict between the interests of the working class and the ruling class. As the death toll mounts, hospitals are overwhelmed, and tens of millions have been thrown out of work, the ruling class is using the crisis situation to implement a massive handout to the corporate and financial elite, unanimously backed by Democrats and Republicans. Moreover, there are growing calls from the political establishment and the media for a rapid return to work, which will encounter mass opposition.

Already, the ruling class’s demand for a rapid return has promoted a nationwide strike wave, including health care workers and construction workers, as well as employees of Whole Foods, Amazon and Instacart.

Sanders’ decision to drop out under these conditions is in keeping with what has always been the central purpose of his campaign: to make sure that social and political anger does not escape the confines of the Democratic Party.

Significantly, Sanders’ announcement came on the same day that New York Times columnist Thomas Friedman, one of the strongest media voices for a quick return to work, called for a Biden nomination and the selection of “a totally different kind of cabinet — a national unity cabinet — from Democrats on the Bernie Sanders left to Republicans on the Mitt Romney right.” Such a government would be aimed at uniting dominant factions of the political establishment as a bulwark against mounting social opposition by the working class.

There are also reports that Sanders spoke on several occasions with former President Barack Obama over the past week. With Sanders officially out, Obama will be able to more directly intervene in the elections in an attempt to bolster the flagging and semi-senile Biden.

At the same time, Sanders must know that there exist enormous doubts within the ruling class about the viability of a Biden campaign. One consequence of Sanders dropping out now is that it clears the way for the Democratic Party to turn toward another right-wing candidate, perhaps New York Governor Andrew Cuomo, who has been extensively promoted in the media.

Already over the past several weeks and months, Sanders has reacted to the deepening crisis of the state apparatus by shifting to the right. As the Democratic Party moved aggressively to block a Sanders nomination in February and March, Sanders issued a number of statements declaring his readiness to wage war against Iran, North Korea, Russia and China.

His last political act as a candidate was to vote for the Coronavirus Aid, Relief, and Economic Security (CARES) Act, which provides hundreds of billions to corporations and backs the Federal Reserve’s multi-trillion-dollar programs to buy up assets from banks and businesses.

In his proposals for further congressional action in response to the coronavirus pandemic, Sanders has dropped any reference to increasing taxes on the wealthy. He has proposed further multi-billion-dollar bailouts to corporations, without challenging in any way their private ownership on the basis of profit.

Nothing that Sanders has done is in the least surprising. His entire tenure as a bourgeois politician made clear the role he would play. Moreover, his campaign is part of an international phenomenon. Whether it is Jeremy Corbyn in Britain, Syriza in Greece, the Left Party in Germany or the Workers Party in Brazil—all have performed the same function.

The real treachery has come from organizations like the Democratic Socialists of America, Socialist Alternative and others that have worked to present an opportunist bourgeois politician as some sort of vehicle for achieving socialism.

In a thoroughly demoralized event last night hosted by Jacobin, Bashkar Sunkara, the magazine’s editor, and other leading members of the DSA denounced not Sanders but the “sectarian left,” by which they mean the Socialist Equality Party (SEP) and the World Socialist Web Site. For these layers, “sectarian” is a term to describe anyone with principles, that is, those who do not prostrate themselves before the Democratic Party.

Sunkara declared that Sanders’ withdrawal meant that “our campaign for not even full socialism but half social democracy kind of petered out as of today.” What has “petered out”—in fact, what has been thoroughly exposed—is the DSA’s brand of pseudo-socialism that claims that anything can be achieved within the framework of the Democratic Party.

In opposition to these organizations of the upper-middle class, the WSWS and the SEP anticipated the trajectory of the Sanders campaign. In February 2016, early in his first presidential run, the WSWS explained that “Sanders is not the representative of a working class movement. He is rather the temporary beneficiary of a rising tide of popular opposition that is passing through only its initial stages of social and class differentiation.”

When he announced his 2020 presidential campaign in February of last year, the WSWS wrote, “The fundamental fraud promoted by Sanders, along with individuals such as Alexandria Ocasio-Cortez, is that the Democratic Party can be pushed to the left and made a force for progressive change.”

Once again, a political analysis based on Marxism and the historical experiences of the Trotskyist movement, and not on pragmatic hopes and maneuvers, has been proven correct.

There are no doubt many sincere workers and youth who will be disgusted by what Sanders has done. They must draw the necessary conclusions.

The only campaign that is seeking to develop a real socialist movement is the campaign of the Socialist Equality Party. The SEP launched its election campaign to fight for genuine socialism, to develop within the working class and among young people a socialist leadership, to fight against war, inequality and authoritarianism in opposition to the Democratic and Republican parties, the parties of the ruling class.

We call on all workers and young people to join this campaign and support this fight.

To support and get involved in the SEP election campaign, visit socialism2020.org.

Bernie Sanders draws his campaign to an end: The political lessons
[19 March 2020]

Sanders and the left feint in capitalist politics
[6 February 2016]