The victims of a monstrous state frame-up, thirteen militant workers from Maruti Suzuki’s Manesar, Haryana car assembly plant have now spent more than seven-and-a-half-years in prison—the last three of them under life-sentence for a murder they did not commit.

The MSWU was founded in a year-long rank-and-file rebellion, including strikes, plant-floor sit-downs and clashes with police, against Maruti Suzuki, India’s largest automaker, and the company-sponsored, government-supported Maruti Udyog Kamgar Union. 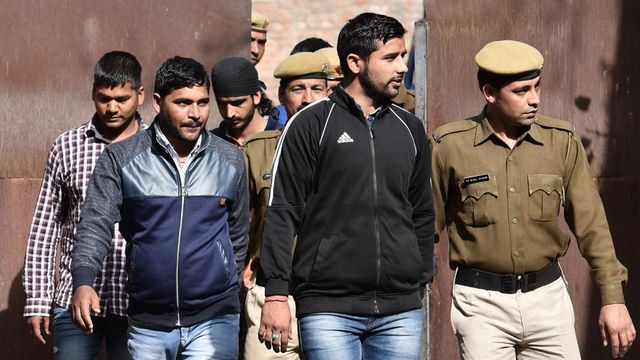 The Japanese-owned Maruti Suzuki colluded with the two main parties of Indian big business, Narendra Modi’s Bharatiya Janata Party and the Congress Party, the police and the courts to smash the MSWU and incarcerate its leaders for life.

India’s capitalist rulers were determined to persecute these young workers and make an example of them, because they dared to challenge the brutal working conditions that prevail in India’s globally-connected auto industry and which are becoming the norm for autoworkers around the world.

At the workers’ March 17, 2017 sentencing hearing, state special prosecutor Anurag Hooda urged the 13 workers be sentenced to death by hanging, saying investors needed to be ensured worker resistance would be ruthlessly stamped out. “Our industrial growth has dipped, FDI (foreign direct investment) has dried up,” said Hooda. “Prime Minister Narendra Modi is calling for Make in India, but such incidents are a stain on our image.”

The International Committee of the Fourth International (ICFI) and the World Socialist Web Site (WSWS) responded to the life-sentences pronounced by the court the next day by immediately launching a global campaign to mobilize the international working class to win the release of the Maruti Suzuki workers.

Three years on, the ICFI and WSWS urge workers around the world to redouble their efforts to win the freedom of these class war prisoners, whose only “crime” was to challenge a brutal work-regimen, cheap-labour and precarious contract jobs.

Their convictions were the culmination of a five-year legal vendetta that began with a July 18, 2012 company-provoked factory-floor altercation, in which company goons, viciously set upon the workers. In the midst of this melee, a fire, whose origins have never been determined, broke out, leading to the death by smoke inhalation of the one manager who showed any sympathy for the workers, Awanish Kumar Dev.

The 13 workers who have been jailed for life for challenging a brutal work regime and precarious low-paid contract jobs.

The company, with the full-throated support of the then Congress Party state government, used the July 18, 2012 events to purge the Manesar plant work force, firing and replacing 546 permanent and 1,800 contract workers. Meanwhile, Maruti Suzuki conspired with the police and government to launch a campaign of terror, arresting and abusing more than 200 workers. Ultimately, 148 workers were jailed and charged with murder and other grave criminal offenses.

As a crucial element in mobilizing support for the Maruti Suzuki workers worldwide, the WSWS published an exhaustive five-part exposure of the frame-up based on the trial transcript. It demonstrated that the trial was a legal travesty. The police, as the workers’ lawyers exposed in court, had fabricated evidence and colluded with the company. They failed to carry out elementary forensic tests on key pieces of evidence. The judge justified the exclusion of testimony from any workers who witnessed the events of July 18, 2012 on the grounds they would be biased, while lauding the testimony of company officials.

Ultimately, the judge was forced to exonerate 117 of the workers, including 89 who had been arrested on the basis of company-supplied lists. But he did so, only to uphold the frame-up against the 13—the key accused. In convicting them, he willfully mangled the law, shifting the burden of proof to the workers, and supplying arguments to cover up holes and discrepancies in the prosecution case. (See: The frame-up of the Maruti Suzuki workers— Part 1: a travesty of justice)

During the almost five-year period between their arrest and detention, and their March 2017 conviction and sentencing, Indian government and judicial officials, including Haryana’s Congress Party Chief Minister, repeatedly urged that the Maruti Suzuki workers be subject to exemplary punishment so as to reassure corporate investors.

Haryana’s current state government, led by the Hindu-supremacist BJP is appealing the workers’ life-sentences, because it wants them hanged.

From the outset, the Stalinist parliamentary parties and the CITU and AITUC, the trade union arms respectively of the Communist Party of India, Marxist (CPM) and the older but smaller Communist Party of India (CPI), have refused to mount a campaign to mobilize the working class in defence of the Maruti Suzuki workers. Indeed, since April 2017 they have effectively banished any mention of them from their publications.

This is because the Stalinists fear the Maruti Suzuki workers’ militant example and recognize any campaign to expose the conspiracy of the courts, police and political establishment to frame-up and imprison them would blow up their own cozy relations with the employers and the Congress Party, till recently Indian big business’ preferred party of government.

In opposition to this conspiracy of silence, workers in Haryana, across India and internationally must intensify their efforts to secure the immediate release of these class war prisoners. Under current conditions, securing their freedom has become a matter of life and death given the devastating impact the spread of the deadly coronavirus threatens to have on inmates of the hell-hole that is India’s prison system.

The struggle and sacrifices required to found the MSWU understandably hold pride of place in the hearts of workers. On Monday, March 2, supporters of the MSWU and workers at the Manesar assembly plant held a brief celebration to mark the ninth anniversary of the founding of the MSWU in 2011.

Thousands of night and day shift workers along with contract workers participated in the event held in front of the factory gates prior to the commencement of the day shift.

Khushiram, a prominent member of the Provisional Committee of the MSWU, which was formed to carry forward the struggle after the July-August 2012 arrest and the subsequent jailing and torture of the leadership of the MSWU, brought this commemoration to the attention of the WSWS by forwarding a Hindi transcript describing the event.

In it Khushiram summarizes the speeches of leaders who emphasize the need to unite the working class across religious divisions, in direct opposition to the murderous communal attacks and killings being instigated by the Modi government to sow divisions among working people. 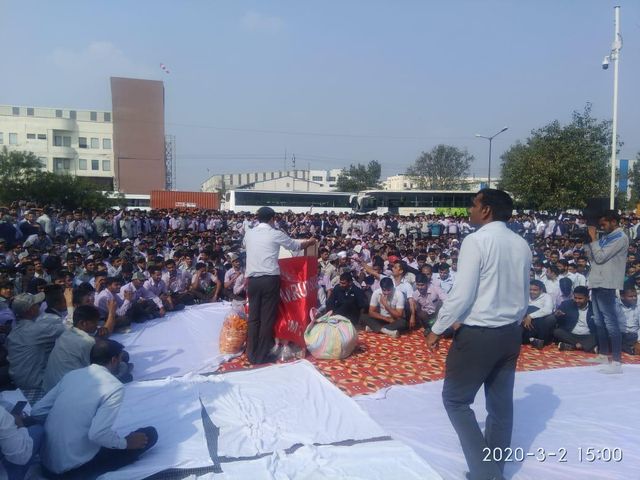 On March 2, thousands of workers participated in a rally outside the Manesar assembly plant to mark nine years since the MSWU's founding.

“Today, the ninth anniversary of the Maruti Suzuki Workers Union (MSWU) is being celebrated with great fanfare. March 1st was the founding day of the union, but since it was a Sunday, this meeting has been organized for March 2nd. Even after 9 years, the enthusiasm of the workers is noteworthy. In addition to the Maruti Suzuki Workers Union, other trade unions and organizations also participated in the meeting.

“While speaking about the history of the organization, MSWU leader Ajmer Singh appealed to workers to always carry forward the heritage of the Red Flag and never forget the members of the working class who sacrificed everything for this struggle.

“The privileges we enjoy today, he told the gathered audience, are due in large measure to the 13 men who remain behind bars.

“Mr. Singh spoke of the on-going Hindu-Muslim riots in the country. He warned workers against coming under the influence of anti-social currents. The working class, he pointed out, needs to maintain the distinct identity that has been forged through struggle. Our movement, he stated, has taught us that religion is divisive, while the very process of struggle unites us.

“We do not know how many innocent people lost their lives in the recent Delhi riots, but we do know that all the victims belonged to the working class. We have not heard of a single capitalist, or politician or family members of such being hurt during these riots. So, we should think carefully about who is behind such attacks and who benefits from them.

“Selfish politicians have no qualms in sacrificing the innocent for their own petty gains. But the working class must always stand with and for the masses against such violence.

“Provisional Working Committee Member Ramnivas spoke about the history of the MSWU, and appealed to the workers to continue doing their work with sincerity. In the current political climate, he said, there’s an attempt to present the Maruti Suzuki plant as an exemplar of “Ram-rajya” (the Hindutva ideal). This was, in fact, part of a conspiracy to keep permanent workers away from production, so that if the union were to enter into a period of struggle, management could still keep the plant running by bringing in temporary contract workers.

“We succeeded in our big strikes in this plant, he said, because we controlled the production. In addition, Maruti Suzuki workers fought for the rights of contract workers as well, and demanded the abolition of the contract system and the right to permanent work as their first major demand. Their willingness to keep fighting has taken them all the way to jail.

“In his speech, Comrade Khushiram brought up the issue of raising the political consciousness of workers. He pointed out that the average salary for a permanent worker is several times those of contract workers who are barely paid Rs.15,000-20,000 ($200-$270) per month. A worker is allocated medical expense up to Rs. 20,000, which is barely even enough to cover any major health condition. The management is focused on increasing its profits, and it does so by hiring more contract workers and reducing the number of permanent workers. To keep workers distracted, these young workers in their 20s were targeted because of the militancy and tenaciousness they displayed against the company management and the Congress Party state government, both of whom wanted to force the workers to meekly submit to sweatshop conditions and constant management abuse at the plant.”

The frame-up of the Maruti Suzuki workers—Part 1: A travesty of justice
[5 April 2017]