As pandemic deaths continue to rise

Trump calls on states to move quickly to reopen their economies

On Tuesday, President Donald Trump seemed to back off from his plan to establish a new White House “Opening Our Country” task force and instead announced that he would be teleconferencing with corporate leaders, politicians and all 50 state governors this week to initiate a back-to-work plan that would be implemented on a state-by-state basis.

Trump announced his stepped-up drive to force workers back to work, under conditions of rising infection and death tolls and an abysmal lack of testing and on-the-job health safeguards, at his daily coronavirus task force press conference. As he made his announcement, governors in the Northeast and the West Coast were joining together to plan out their own return-to-work programs.

The governors of seven eastern states—New York, New Jersey, Connecticut, Delaware, Pennsylvania, Rhode Island and Massachusetts—announced on Monday that they would work together to gradually loosen social distancing rules and reopen non-essential industries that had been closed due to the pandemic. 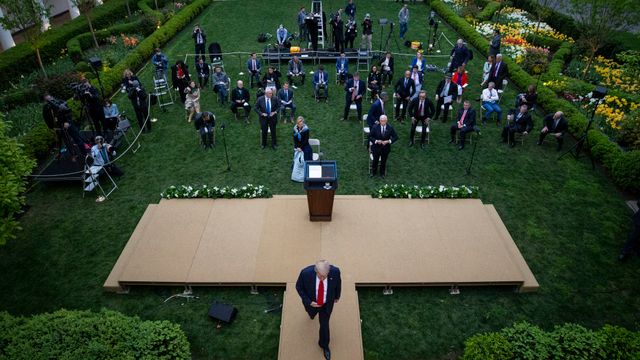 President Donald Trump departs after speaking about the coronavirus in the Rose Garden of the White House, Tuesday, April 14, 2020, in Washington. (AP Photo/Alex Brandon)

The governors of three West Coast states—California, Washington and Oregon—also announced a similar pact on Monday. All but one of the 10 governors, Charles Baker of Massachusetts, are Democrats.

The bipartisan character of the drive to reopen business without having brought the disease under control was underscored by presumptive Democratic presidential candidate Joe Biden’s op-ed piece in Monday’s New York Times, headlined “My Plan to Safely Reopen America.”

The Wall Street Journal on Tuesday congratulated both Trump and the Democratic governors for moving to lift the restrictions on profit-making. In an editorial headlined “Reopening the Economy, at Last,” it said:

“At long last our political leaders are considering how they can reopen the American economy they put into a destructive coma. Let’s hope this overdue process doesn’t devolve into another fight between governors and President Trump that will confuse Americans and slow the return to normal economic life.”

The editorial went on to complain that “The focus for weeks has been on the course of virus infections, the danger of overrun hospitals, and the death toll.”

In a similar vein, the Washington Post published an editorial with the headline, “The next phase: Can we find a way to begin reopening even as we live with the virus?” The newspaper’s owner, Amazon boss Jeff Bezos, has made billions off of the pandemic, with Amazon stock hitting a new record high on Tuesday.

At his Tuesday press conference, Trump barely sought to conceal in whose behalf he was pushing for a rapid return to work. He hailed the record surge in the stock market since the passage last month of the bipartisan multi-trillion-dollar corporate bailout bill, and predicted that the markets would not only recoup their losses from the near-shutdown of the economy and the explosive growth of unemployment, but would soon hit new highs.

He then listed dozens of S&P 500 corporations with which he would be consulting on Wednesday, including the top firms in agribusiness, banking, defense, energy, the hedge fund and private equity sector, the restaurant and food industry, transportation, telecommunications, hospitals, pharmaceuticals, health insurance, high tech and the professional sports leagues.

The total wealth of the CEOs with whom he will be plotting the back-to-work drive is in the tens of billions, enough to provide a significant number of the masks and personal protective gowns that are desperately needed by health care workers, grocery workers, logistics workers, transit workers and others for whom the lack of such equipment is fueling disease and death.

He said he would be consulting with “thinkers” from such right-wing institutions as the Heritage Foundation and the Hoover Institution, and named individuals including right-wing economist Arthur Laffer and the Iraq War conspirator Condoleezza Rice. On Friday he plans to meet remotely with religious leaders. On Thursday he is to meet with the governors in all 50 states to lay down the guidelines for the reopening of their states.

He did not mention a single doctor, public health expert or scientist in the long list of consultants.

Trump said different states would reopen on different dates, but he was convinced some would begin lifting restrictions even before May 1.

It is one thing, however, to announce a premature return to work. It is another thing to carry it out. The ruling class is well aware of the seething anger in the working class over the catastrophe that has been inflicted on it as a result of the incompetence and indifference of the entire political and economic system.

Workers have rebelled against being forced to work under unsafe conditions, with wildcat strikes and protests being organized by autoworkers, nurses, Amazon workers, grocery and Instacart workers and food processing workers.

The entire political system is being discredited, as trillions are funneled to bail out the financial oligarchy while nothing serious is being done to organize mass testing and provide needed hospital beds and ventilators. Nearly 17 million workers have filed for unemployment benefits over the past three weeks, and millions more have had their pay cut. The bailout bill has done next to nothing to provide income for workers who live paycheck to paycheck, resulting in the appearance of massive food lines across the country for the first time since the Great Depression.

The crisis has fueled tensions and conflicts within the ruling class and the state. The Northeast and West Coast governors have called for a gradual reopening of the economy and promised expanded testing to head off a new surge in infections and deaths. On Monday, Trump reacted angrily to their actions, declaring that governors had no authority to determine how the restrictions would be lifted, and that as president, he had “total authority.”

New York Governor Andrew Cuomo responded to Trump’s assertion of unconstitutional and authoritarian powers by declaring that Trump was not a king and the states had powers within the constitutional framework of the United States. However, far from mounting a defense of democratic rights, by the time of his daily press conference Tuesday morning, Cuomo was calling for a partnership with the fascistic occupant of the White House.

He said: “The president will have no fight with me… This is no time for politics, and it is no time to fight. I put my hand out in total partnership and cooperation with the president. If he wants a fight he’s not going to get it from me.”

Trump seemed as well to have had second thoughts about provoking an immediate constitutional confrontation with the states. At his Tuesday press conference he did a 180-degree turn and said each state would decide for itself how and when to reopen.

The Democratic governors in no way represent a progressive or democratic opposition to Trump. Workers in their states will face brutal and deadly conditions if they are forced back to work without a massive deployment of resources to ensure their safety. At the same time, millions of workers who have been laid off will never get their jobs back, and many will he hit with wage cuts and speedup.

States and cities across the country are preparing massive cuts in schools, social services, pensions and public employee jobs to impose huge deficits from lost revenues on the backs of the working class. New York City Mayor Bill De Blasio has already announced a hiring freeze and budget cuts, and Detroit Mayor Mike Duggan has threatened a return to bankruptcy and the imposition of a new emergency financial manager. Both are Democrats.

For all the Democrats’ talk of a “safe” reopening of their state economies and the need for sharply expanded testing, isolation, contact tracing and care of those infected, they have done nothing to put these conditions in place, and have no intention of doing so in the future. This is because the corporate oligarchy is implacably opposed to the diversion of the required resources from their money-mad pursuit of personal enrichment.

Talking out of both sides of his mouth, Cuomo said on Tuesday that his group of governors in the Northeast would begin to reopen businesses only under conditions of mass testing. He then said: “How do you start to do the massive testing that we’re going to have to do here? And that we don’t have the capacity to do today? The capacity does not exist.”