Data released this month by the National Pollutant Inventory revealed that the Vales Point coal-fired power plant on the New South Wales (NSW) Central Coast released 130,000 kilograms of fine particulate matter in 2018-19, an increase of 181 percent over the previous year.

Australians became all too familiar with toxic PM2.5 pollution in recent months, as smoke from the summer’s catastrophic bushfires enveloped large sections of the country for weeks on end. 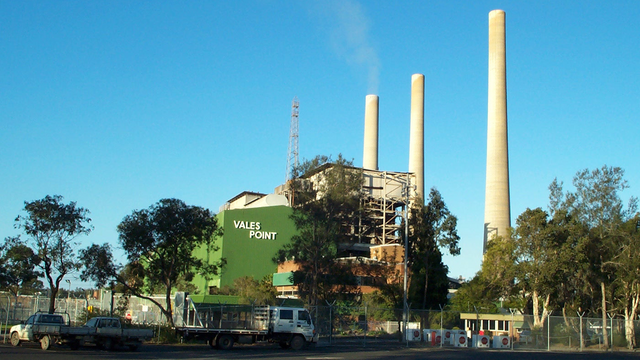 The World Health Organisation estimates that 4.2 million premature deaths each year are caused by air pollution. Exposure to PM2.5 has been shown to increase the incidence of heart, lung and kidney disease.

A study released earlier this week at Harvard University in the United States found that a small increase in long-term exposure to PM2.5 also is associated with a 15 percent increase in the COVID-19 death rate.

An Australian federal government review board recently ruled against a bid to use $14 million of the federal Emissions Reduction Fund (ERF) to upgrade the privately-owned Vales Point plant.

The Independent Emissions Reduction Assurance Committee found that the proposed turbine blade replacement project would cut the power station’s carbon emissions by a mere 1.3 percent, not enough to bring the plant’s emissions below the grid average.

The bid for funding had been rejected in 2018 by the government’s Clean Energy Regulator for the same reason, but the plant’s multi-millionaire co-owner, Trevor St Baker, sought an “urgent meeting” to appeal the decision. Melissa Price, the then environment minister in the federal Liberal-National government, called for the review.

While this proposal was turned down, nothing in the ruling contradicts Price’s 2018 insistence that the ERF was “technology neutral,” and therefore could be used to fund supposed upgrades to polluting coal-fired power stations.

In the first five years of its operation, the government’s $2.55 billion ERF reportedly reduced Australia’s carbon pollution by 44.8 million tonnes, a mere 8 percent of the country’s annual emissions, and less than one fifth of the emissions caused by the recent bushfires.

More than half of that reduction came from reforestation projects, suggesting a significant portion of projected future gains may have literally gone up in smoke.

Like the earlier Emissions Trading Scheme introduced by the last Labor government of 2007 to 2013, the ERF is aimed at bolstering the very capitalist market responsible for global warming and the environmental crisis.

Rather than forcing big polluters to forgo any of their profits to reduce, or at least pay the true cost of, their carbon emissions, they are rewarded with additional public funds for even the smallest effort to improve their environmental performance.

Vales Point, which has a 1,320 MW generating capacity, is the twelfth-largest power plant in Australia. It was sold to Sunset Power International by the NSW Liberal-National state government in 2015 for just $1 million, the price of an average house in Sydney.

Company documents released in 2017 valued the power station at $730 million. Since 2017, Sunset Power International shareholders have been paid dividends of almost $72 million.

NSW Premier Gladys Berejiklian, who was the state treasurer at the time of the sale, claimed that $130 million of government money earmarked for future liabilities—mostly staff entitlements—at the site would be “returned” to the government.

Berejiklian said: “With the sale of Vales Point, NSW is no longer exposed to significant liabilities, such as costs associated with decommissioning, estimated to be in the tens of millions.”

It was later revealed that Sunset Power would be responsible only for $10 million of the cleanup costs when the site is shut down, leaving the NSW public responsible for a bill likely to be in the tens, if not hundreds, of millions.

The plant was previously expected to shut down by 2025, but the company now suggests it could run until 2049. Even if the proposed turbine upgrade went ahead, the 24-year extension would result in the emission of more than 160 million tonnes of carbon dioxide.

Vales Point was not the first NSW power station to be handed over to the corporate sector at a bargain price.

In 2013, Eraring Energy, valued at more than $1 billion, was sold to Origin Energy by the NSW Liberal-National government for just $50 million. Its assets included Australia’s second-largest energy plant, the 2,880-megawatt Eraring power station in nearby Dora Creek, Lake Macquarie. Sweetening the deal even further, Origin Energy was awarded $300 million in compensation for the termination of a future coal supply contract.

The NSW Environmental Protection Agency last month handed down a $15,000 fine for excessive dust emissions from the Eraring station’s ash dam, the third such penalty imposed on the plant in the past three years.

Privatisation of electricity has been promoted on the false promise that it would result in reduced power bills. In fact, average household electricity bills have increased by more than 35 percent in real terms since 2007-08, when this privatisation began. This is despite a reduction of more than 13 percent in average household energy consumption.

At the same time, electricity companies have sought to increase their profits by slashing thousands of jobs. Energy distributor Ausgrid alone has sacked more than 2,000 workers since 2014. That recently resulted in more than 15,000 of their customers in NSW waiting over a week for power to be restored after major storms and flooding battered the east coast of Australia in February.

While the full privatisation of the electricity industry in NSW has been carried out by Liberal-National governments, it was the previous state Labor government that kickstarted the process in 2008. Despite broad public opposition, then Labor Prime Minister Kevin Rudd backed the plan to sell off the retail side of the state’s power industry.

The selling off of utilities and major public companies was initiated by the Hawke and Keating federal Labor governments, which offloaded the Commonwealth Bank in 1991, followed by Qantas in 1993.

Keating boasted in 2008: “From the day the National Electricity Market, established by the Keating government, went into operation in 1995, there was no economic or commercial reason why any state would retain state ownership of power generating capacity.”

The trade unions have enforced these privatisations, repeatedly negotiating with employers to shed thousands of jobs through “voluntary” redundancies. Workers’ efforts to oppose privatisations have been corralled into toothless protests or election-year attempts to shore up support for Labor. At the same time, Labor and the unions have opposed calls for a move away from coal, on the phony basis of protecting jobs.

Far from a serious effort to reduce carbon emissions and build a reliable, modern electricity network based on renewable energy, the climate policy of successive Australian governments, federal and state, has served to further the profit interests of the corporate and financial elite.

The irrationality of capitalism: Millions cut off from electricity, lives endangered by California utility PG&E
[11 October 2019]