Fearful of social and political unrest, the Australian government is trying to hide the vast levels of joblessness inflicted on the working class over the past month, accelerated by the impact of the worsening global COVID-19 pandemic.

Treasurer Josh Frydenberg issued a media release on Tuesday saying Treasury analysis predicted the official unemployment rate would peak at 10 percent in the June quarter of 2020, virtually doubling the 5.1 percent recorded for February. He did not publish the analysis, however.

Even that forecast would indicate immense financial hardship and social distress. It would mean almost 1.4 million people out of work, an all-time record for Australia.

But this figure does not count the now “under-employed” workers, particularly casuals, who have lost most of their paid working hours. And the official statistics are a gross underestimate.

Last month’s Roy Morgan company survey found that unemployment for the second half of March jumped a staggering 1.4 million to 2.4 million (16.8 percent) and under-employment increased 374,000 to 1.52 million (10.6 percent).

In total, a record 3.92 million workers, or 27.4 percent, were either unemployed or under-employed by the end of March. 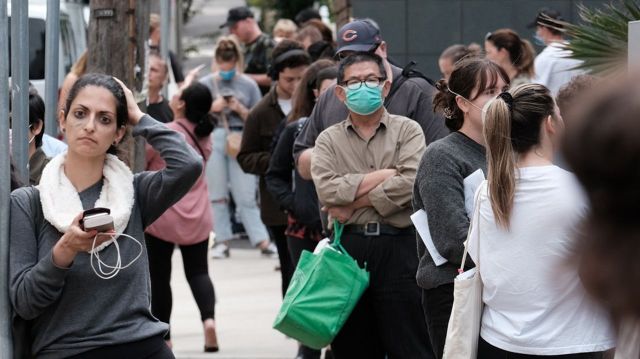 The queue outside a Centrelink office in Sydney last month (Photo: WSWS)

This surge produced Great Depression-style queues outside the government’s Centrelink welfare offices across the country, as laid-off workers lined up to apply for dole payments.

Roy Morgan CEO Michele Levine described it as “the biggest shock to the Australian economy, and workforce, since World War II—well beyond living memory for the vast majority of Australians.”

Today’s official unemployment figures, showing a rise to 5.2 percent, are from mid-March. That was before the belated COVID-19 partial lockdown ordered by federal, state and territory governments deepened the slump that was already underway because of the summer bushfire disaster and the downturn throughout global capitalism.

In Tuesday’s media release, Frydenberg claimed: “The Morrison government’s historic $1,500 fortnightly JobKeeper payment will support millions of Australian jobs as we build a bridge to the other side following the severe economic impact from the coronavirus.”

Except for the $130 billion “JobKeeper” wage subsidy scheme for employers, the treasurer said, the unemployment rate would have been 5 percentage points higher, peaking at around 15 percent.

There is no basis for these claims. Frydenberg said 800,000 businesses, including self-employed sole traders, had registered for the JobKeeper scheme, but provided no statistics on whether employers had kept workers on payrolls as a result.

While it is an unprecedented bid to bail out business, the Liberal-National government’s $130 billion scheme was never likely to be sufficient, or take effect quickly enough, to avert mass unemployment.

Not only does the scheme exclude about 1.1 million casual workers and 1.4 million foreign workers on temporary visas, the payments to employers do not start until next month.

Many businesses, particularly smaller ones, will not survive until then. Others, especially big employers, may keep workers on their books but exploit the scheme to slash their wages to $1,500 a fortnight and impose sweeping cuts to conditions, such as leave entitlements and penalty pay rates.

That is the primary purpose of the bailout package, apart from disguising the levels of unemployment. Backed by the Labor Party and the Australian Council of Trade Unions (ACTU), the legislation pushed through parliament last week amended the Fair Work Act to enable employers to inflict such measures.

At the same time, ACTU secretary Sally McManus said the trade unions had told employers they could “get everything you want” with the cooperation of the unions.

Despite all these efforts to prop up the bankrupt capitalist order, the latest monthly National Australia Bank (NAB) business survey, released on Tuesday, reported that business confidence had plunged to minus 66 points. This was far worse than any other recording since the survey began in 1989 and much deeper than the minus 30 points in 2009.

Such a confidence collapse is another warning sign of evaporating demand, falling investment, corporate bankruptcies and further job losses.

NAB chief economist Alan Oster said: “We expect a recession of unprecedented speed and magnitude for the Australian economy over the next three quarters. This will see a sharp increase in unemployment.”

Referring to the government’s “stimulus” measures, totalling more than $320 billion in handouts, tax concessions, incentives and loans to the corporate elite, Oster said: “Policy makers have made a huge response that we think will be unable to offset the negative prints we will see in economic data in the near term.”

Oster said NAB remained “optimistic” that the government measures would “support a solid recovery once the virus is contained.” That “optimism” is belied by what is happening around the world as the COVID-19 death toll rises.

The government’s efforts to cover up the job carnage were further exposed yesterday when the International Monetary Fund (IMF) issued dire predictions for global and Australian capitalism.

The IMF forecast the biggest worldwide crash since the 1930s Great Depression, with global output falling by 3 percent in 2020—30 times more than during the 2008–09 economic breakdown.

Because of Australian capitalism’s dependence on raw material exports, tourism and income from international students, the IMF predicted a 6.7 percent drop in the country’s gross domestic product (GDP) for 2020, the largest fall since the 9.4 percent plunge in 1931.

The devastating joblessness and impoverishment confronting workers and young people in Australia is not just a product of the local coronavirus restrictions. Rather, it demonstrates the vulnerability of Australian capitalism to the global meltdown triggered by the pandemic.

The IMF forecast sharp downturns in all capitalist centres, including the US (-5.9 percent), Europe (-7.5 percent), Canada (-6.2 percent) and the United Kingdom (-6.5 percent). It said China, whose massive stimulus measures in 2008-09 prevented a recession in Australia by boosting iron ore and coal demand, would record growth of just 1.2 percent this year, far below its rates of a decade ago.

The IMF predicted V-shaped rebounds next year, including 6.1 percent in Australia. But that was based on the assumption that governments would end social distancing restrictions in the second half of this year, thus pushing workers back to work.

The fund warned that this “baseline” scenario would be upended if the pandemic lasted longer, leading to extended durations of containment, worsening financial conditions, and further breakdowns of global supply chains.

Well before the bushfire catastrophe and the pandemic, corporate investment was drying up in Australia, and workers also faced falling real wages, soaring rates of casualisation and the highest household debt levels in the world.

Now, as a result of capitalist governments failing or refusing to respond to the COVID-19 danger in time to save thousands of lives, workers have lost their jobs, many cannot pay their rents or mortgages and their lives are threatened by demands from governments and corporations to return to work, regardless of unsafe conditions.

Australian unions tell employers: “You can get everything you want”
[7 April 2020]