In the wake of rising anger by workers over the unchecked spread of COVID-19 in the US meatpacking industry, officials have announced more temporary closures of pork, beef and poultry facilities.

After state and local health officials ordered the closure of the JBS meatpacking plant in Greeley, Colorado the company said it would close the facility for two weeks after winding down operations Tuesday and Wednesday of this week.

There are 6,000 workers at the JBS plant in Greeley and the report of 102 infections is undoubtedly a significant underestimation. On Monday, JBS announced it was cancelling further COVID-19 testing due to the shutdown. 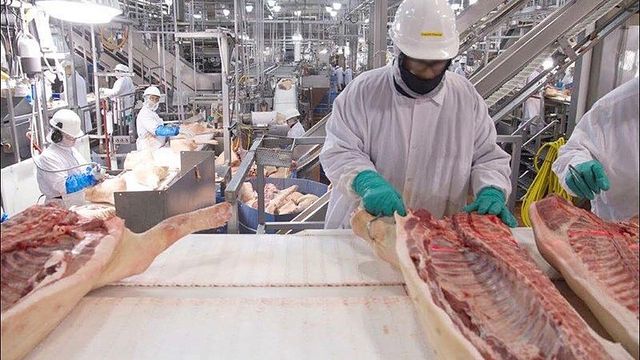 Workers in a Hog Slaughter and Processing Plant (Wikipedia Commons)

Among the dead at the JBS plant were Tibursio Rivera Lopez, age 69, who died on April 10; Saul Sanchez, age 78, and Eduardo Conchas de la Cruz, age 60. The fourth worker was apparently a supervisory employee, but his name has not been made public.

Responding to the announcement one worker, David, wrote on the JBS Facebook page “It’s a little too late. JBS has killed 4 employees because of their greed. Now the question is, JBS what are you going to do for the families that lost their loved ones? And for the employees that you ‘JBS’ put at risk. Remember JBS ‘We The People’ made you, ‘We The People’ can break you.”

Another worker, Christopher, wrote, “You’re canceling testing because you’re afraid of the backlash, both socially and legally, if the actual number of infected people came out. Being tested is something that can be carried out without the employees going to the job.”

Randy asked, “How much are you going to pay the families of the workers you killed because of your negligence?”

Adolfo commented angrily, “JBS SWIFT acted like the President. THEY HAD TIME TO CONTROL THIS OUTBREAK but they ignored almost all the phone calls that could have saved lives…”

Chelsea added, “They work in conditions I would not wish on a rat. You are not protecting them from COVID-19… I wish I could do more, report them to your governor and local mayor. You are worth more, JBS employees, while Andre [CEO Andre Nogueira] has his mansion in Brazil; He will continue to treat you like cattle. Stand up for yourselves.”

The closure of the JBS plant follows shutdowns of several other meatpacking facilities. Smithfield Foods, the top pork processor in the US, is closing plants in Wisconsin and Missouri this week.

Smithfield had announced Sunday the shutdown of its large Sioux Falls, South Dakota plant. Sioux Falls was the scene of a bloody union organizing battle by meatpacking workers in the 1930s that saw confrontations with the National Guard. The factory, then owned by Morrell, was also the site of a 1987 strike, which was isolated and betrayed by the United Food and Commercial Workers union (UFCW).

Company officials said that workers at all three Smithfield plants had tested positive for COVID-19 and that the Missouri plant was also closed because it relied on shipments from the Sioux Falls facility.

Smithfield only reluctantly agreed to the temporary closure of the Sioux Falls plant after opposition from workers who denounced an earlier two-day closure and the inadequate safety measures, which the UFCW had agreed to. Last weekend, hundreds of workers and local residents protested by encircling the factory with their cars and demanding its immediate closure and testing for workers.

Afterwards, South Dakota’s Republican Governor Kristi Lynn Noem—one of the few governors who has not ordered a state shutdown—and Sioux Falls mayor, Democrat Paul TenHaken—called for Smithfield to shut down. TenHaken has since issued a city-wide shelter-in-place order while publicly stating, “Smithfield is not the enemy.”

The Sioux Falls plant has been pinpointed as the source of most of the 1,311 COVID-19 infections in South Dakota, with more than 640 cases linked to the plant. On Wednesday, Austin Rodriguez, a 64-year-old plant worker, died of COVID-19 after spending two-weeks on a respirator. Most of those employed at the plant are immigrants and refugees from Latin America, Africa and East Asia, and many are undocumented without access to sick leave or health insurance.

“He was a very friendly, respectful person,” said José Lopez, a former Smithfield worker, who knew Rodriguez, in comments to the local media. “I have many friends who tested positive. This virus really hit us badly.”

Susan Strobel, an assistant professor of public health at University of South Dakota, in comments to the local media noted that 18 counties in the state “do not have a clinic or hospital in them.” Adding “Some people live two hours from a hospital in really rural areas.”

COVID-19 concerns have also led to the closure of a Cargill meat packing plant in Pennsylvania and a Tyson plant in Columbus Junction, Iowa.

Many of the workers have reportedly been transferred to the Tyson Waterloo plant, 114 miles north of Columbus Junction, with no quarantine time in between. With COVID-19 cases rising, hundreds of Waterloo workers have refused to work, according to a report in the Waterloo Courier .

The local newspaper interviewed the medical staff at the Peoples Community Health Clinic, where many Tyson employees go because the clinic has good interpreting services for Tyson’s large non-English speaking population. “Our clinic is seeing tons of COVID-19,” one staff member told the Courier, adding that cases at the clinic accounted for “half or more” of the total in Black Hawk county.

Workers told staff members that they were not being provided with personal protection equipment and alleged hand sanitizer stations were not being filled. “We have had actual managers confirm that there are cases in the plant, but they don’t want to cause panic and cause people to not come to work,” the employee told the Courier Wednesday, declining to go on the record for fear of being fired.

Three Tyson workers have died at a plant in Camilla, Georgia and there have been protests at the Perdue Perry Cook Plant in Kathleen, Georgia.

Forty-seven COVID-19 cases have been traced to a Tyson plant in Wallula, in eastern Washington state. The facility employs 1,400.

The role of the unions in every case has been to provide a cover for management’s indifference to health and safety and suppress strikes and protests by workers.

The United Food and Commercial Workers reports that at least 1,500 of its members have been infected and 30 have died from the coronavirus, including workers at grocery stores. Despite this, the union has sought to block every job action. The UFCW has also signed temporary deals for small bonuses, many tied to attendance, as a means of increasing economic pressure on workers to remain on the job, despite the threat to their lives.

At the Tyson plant in Shelbyville, Tennessee the local branch of the Retail, Wholesale and Department Store Union (RWDSU) was effusive in its praise of management in comments to local Newschannel 5 reporters. Seventeen workers at the plant, which employs 1,000, have tested positive for COVID-19.

Workers who spoke to the media had a different take on the situation. One said, “I’m scared. I know I got to work. Ain’t nobody handing me nothing. So, I know I got to go there. I’m going there putting my life on the line to make sure they get the chicken out.” Another added, “They are worried that they will take it home to their kids.”

Tyson offered a derisory $500 bonus to workers who don’t miss a day of work over three months, but as one worker noted, it only encouraged workers who are sick to come in to work. “It does because at the end of the day, they can’t afford to miss work because they [don’t have any] type of money saved up to fall back on,” a worker said.

Six or seven day workweeks are typical in the meatpacking industry. Often workers depend on overtime to pay their bills given the poverty level wages that are typical. According to the US Bureau of Labor Statistics the average meatpacking worker made just $28,450 a year in 2016, or around $13.50 an hour assuming a 40-hour workweek.

Despite the production shutdowns, there does not appear to be a shortage of food. However demand has shifted. The pandemic has halted food sales by restaurants and ended lunches at school cafeterias. On the other hand, demand from food banks has surged as workers lose their paychecks. These disruptions have impacted the cattle and dairy industry, which because of the capitalist markets’ lack of planning, have been left with product they cannot dispose of, despite increasing hunger.

According to the Dairy Farmers of America cooperative, dairy farmers are now dumping as much as eight percent of their milk. There has also been talk of pork producers euthanizing their herds if they can’t bring them to market due to the just-in-time production system that makes it more expensive to feed animals then to just dispose of them.

The Trump administration has indicated it plans to carry out purchases of milk and meat products. Inevitably the bulk of the money will end up in the coffers of giant agribusiness, not the shrinking bank accounts of small farmers.