As part of the Coronavirus Aid, Relief, and Economic Security (CARES) Act, the Trump administration is deepening its assault on public education. While starving desperate school districts of the funding needed to offset the impacts of the COVID-19 pandemic, the minuscule amount being provided is through block grants, setting a precedent to further undermine Title I and other needs-based education funding.

Out of the $2.5 trillion package, merely $30.75 billion, or 0.122 percent, is earmarked for public education funding. The misnamed Education Stabilization Fund will provide roughly $17 billion for K-12 education and $14 billion for higher education, with much of the funds liable to go to charter and private schools. Already, Ivy League schools, including Harvard, Cornell and Columbia, have received a combined $34.4 million, despite having endowments totaling $59.13 billion. 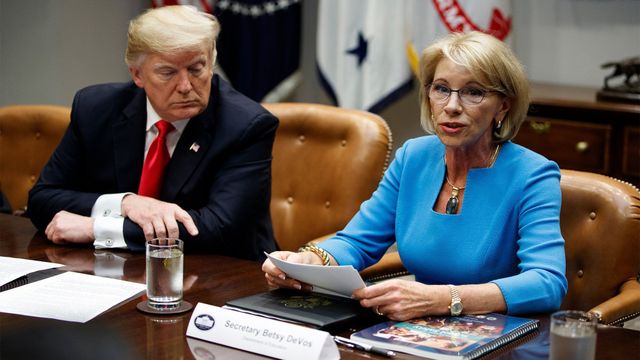 States have already lost tens of billions of dollars in revenues since the start of the pandemic, and the Center for Budget Policies and Priorities has estimated that roughly $500 billion in state funds will be lost in the coming fiscal year due to declines in tax revenues. This figure is over 16 times the amount provided for education by the CARES Act. While trillions of dollars are being funneled to Wall Street and the coffers of the rich, teachers and education workers are once again hearing the old lie: “there is no money.”

Three weeks after the signing of the CARES Act, Department of Education (DOE) Secretary Betsy DeVos announced last Tuesday the distribution of $3 billion in funds for K-12 education through the Governor’s Emergency Education Relief Fund (GEERF). Through this block grant disbursement, the Trump administration is using the pandemic to advance its reactionary agenda to dismantle education programs for the most impoverished working class youth.

Such a funding method has been used to erode welfare and Medicaid funding since the 1990s, and right-wing education “reformers” such as Betsy DeVos have long advocated for the use of block grants to dismantle Title I spending, which provides funds to the most impoverished students and schools. In its 2021 proposed budget, the Trump administration sought to wholly replace the Title I program with a block grant system, and the current initiative is meant to set a precedent to justify this reactionary assault on yet another entitlement program.

According to an April 14 DOE press release, the GEERF funds are “an extraordinarily flexible ‘emergency block grant’” which can go towards funding “schools (including charter schools and non-public schools), postsecondary institutions, and other education-related organizations.” The DOE statement on the grants also stressed that the application is “streamlined” to make it easier for governors to access the funds, encouraging them to “truly rethink and transform the approach to education during this national emergency.”

During a White House briefing on the CARES Act, DeVos was clear on her intention, stating, “I’ve always believed education funding should be tied to students, not systems, and that necessity has never been more evident.” Behind the rhetoric, DeVos’ underlying motive is to remove funding “tied to students” that are most in need, and to divert those funds to “systems,” including the expanding network of charter schools, religious schools and private schools which she has promoted for decades.

DeVos calls her block grant proposals “Educational Opportunity Scholarships,” or “merged funding streams.” Block grant funding levels typically are fixed, whereas the Title I entitlement structure in education increases funding to respond to increased need due to economic downturns, natural disasters, or higher-than-expected costs, such as the current pandemic.

The “increased flexibility” and lack of minimum standards pertaining to block grants means that states can make program cuts that federal law does not permit, or shift the federal funds to purposes other than education, including to replace lost revenues.

Title I funding emerged with the 1965 Elementary and Secondary Education Act (ESEA), a key component of the antipoverty reforms introduced with Lyndon Johnson’s “Great Society” programs, the last reformist measures ever implemented by American capitalism. Funds were designated for those most vulnerable, impoverished and in desperate need of resources.

Thirty years later, in 1995, the Clinton Administration adopted the reactionary slogan of “school choice,” providing money to privately-run and publicly-funded charter schools for the first time. In 2001, the Bush Administration's No Child Left Behind (NCLB) policy first tied funding to standardized tests, with schools with low test scores labeled as failing and eventually closed.

In 2009, as part of the then-record $787 billion bailout of Wall Street, the Obama Administration enacted the Race to The Top program, tying funding to “accountability.” Teachers were fired, schools were closed and education in cities like New Orleans became monopolized by charter schools. By 2012, at least 350,000 teachers had lost their jobs and countless schools throughout the country were closed.

Under Obama, Title I funding was changed from being money guaranteed based on need and the percentage of students getting free and reduced lunches, to money granted based on whether districts lifted caps on charters, merit pay and vouchers. The present aim of the Trump administration is to “finish the job” of eliminating all funding for traditional public schools.

Over 50 years after the Great Society reforms, America now has 43 million people who live below the poverty line, or twice as many as 50 years ago. Two and a half million children are now homeless. State funding to public education during the Great Recession was never restored, prompting a wave of teachers strikes beginning with the 2018 wildcat strike by West Virginia teachers. Since 2018, over 700,000 teachers across the US have been involved in strikes against unending austerity.

In the present crisis produced by the pandemic, immense austerity is once again on the agenda, on a far greater scale than what took place after 2008. Political establishments in every country are plotting the complete destruction of public education, by enacting cuts beginning from childcare and continuing through higher education.

In New York City alone, last week Democratic Mayor Bill de Blasio announced plans to cut $827 million from the city’s education budget. Democrat David Age, the governor of Hawaii, intends to cut teacher pay by 20 percent as early as May 1. The state of Washington’s Democratic Governor Jay Inslee has cut 147 new items from the state budget, including $100 million for 370 new high school counselors, who are most desperately needed by students during the pandemic.

In Kentucky—where last year teachers carried our “sickout” strikes in defiance of their union—last month the state Senate passed a budget bill that will withhold $1.3 billion from teacher pension funding unless teachers agree to cut retirement benefits for newly hired teachers. In Nevada, Democratic Governor Steve Sisolak has instructed districts to prepare to cut four percent from their budgets for this fiscal year and six percent in 2021, with potentially eight percent more if conditions worsen, saying the cuts will be "surgical and thoughtful."

In the afermath of the wave of strikes by teachers over the past two years, which were contained and shut down by the unions based on promising teachers meager pay increases and school funding increases, these false promises have been cast aside during the pandemic, in the name of “fiscal responsibility.”

Over the coming weeks and months, as districts and states begin implementing devastating cuts, there will be an enormous movement of workers, teachers and students in opposition to this austerity. There will be an insistence that this time the working class will not pay for the criminal activities of Wall Street speculators and corporate executives.

Teachers must break with the Democratic Party and its appendages, the American Federation of Teachers, the National Education Association, and all their state and local affiliates. To coordinate their struggles in a revolutionary direction, teachers must form independent rank-and-file committees and fight to link up with teachers across the US and internationally. Such committees must fight to unite the entire working class, including all education workers, autoworkers, logistics workers, health care workers and transit workers, to halt the pandemic and reorganize society in the interests of social need, not private profit.