Steel mills close and layoffs mount throughout the United States

Steel mills are closing and layoffs mount in the United States steel industry as manufacturers are in their worst crisis in history following the coronavirus pandemic. Never before in history has demand for steel evaporated so quickly. Tens of thousands of steelworkers and iron ore miners are losing their jobs as demand disappears and steel mills throughout the country close down and production scales back.

Currently, steel mills are operating at 56 percent of capacity, down from 80 percent in 2019 according to the American Iron and Steel Institute. The price of hot-rolled coiled steel, the industrial benchmark, has fallen 18 percent from $608 a ton in January to less than $500 a ton presently. The price is expected to drop further as demand continues drying up.

Even before the impact of the coronavirus, the decline in steelmaking was well underway. United States Steel’s corporate stock had lost 75 percent of its value, falling from the recent high of $48 in the beginning of 2018 to the $10-$12 range in December and January of this year and has since fallen even further—to the $5-$6 dollar range. During his election campaign, Trump repeatedly promised he would revive the steel industry through trade war measures primarily aimed at imports from China and Europe. 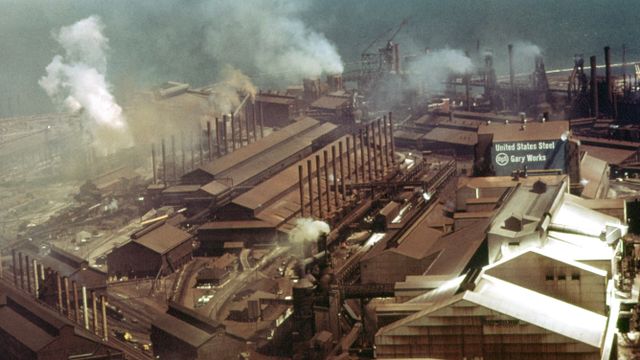 The impact of the coronavirus and the global depression will accelerate the overproduction of steel and the attack on the jobs of steelworkers. China, which produces over half the world’s steel, kept most of its production running even while its manufacturing plants were shut down. China now has enough steel sitting in its warehouses, yards and docks to supply world demand.

New car and appliance sales have almost ceased to exist as tens of millions of workers have been thrown out of work. Coils, beams and slabs of steel are piling up in the yards of steel mills throughout the country and world. Declining prices and demand for oil and natural gas has meant a halt to most gas drilling and pipeline construction.

Building construction has stopped in many parts of the country and many will not resume as investors bail out of projects. Half-completed homes, offices and retail space will litter our cities even as millions go hungry and homeless. Natural gas and oil drilling have all but stopped as the price of oil plummets, even going into negative territory earlier this week as demand bottoms out.

Earlier this month US Steel, the nation’s second largest steel maker, began sending layoff notices to its 1,545 workers at its Great Lakes Steel works on Zug Island in the downriver communities of River Rouge and Ecorse just south of Detroit. The last cast of steel was made on March 30, and layoff notices began going out the next day. At one time the massive complex employed nearly 18,000 workers.

United States Steel is also closing its tube mills in Lorain, Ohio and in Lone Star, Texas. Last month the company issued a Worker Adjustment and Retraining Notice (WARN) that it would idle its operations at Lorain Tubular Operations facility in Lorain, Ohio, with all 250 employees being laid off starting May 24. Aside from maintenance personnel, most of the 600 workers at US Steel’s Lone Star Tubular Operations in Lone Star, Texas will lose their jobs. Both mills make steel piping for the gas drilling and transport industry.

US Steel has also idled blast furnaces at mills in Gary Works in Indiana and its Granite City Works in Illinois. Both shutdowns were announced prior to the pandemic as cost cutting measures but the company now says it has no plans to reopen them. The company’s layoffs extend to the company’s iron ore mining operations in the iron range of Minnesota. The Keetac mine in Keewatin will be closed by the end of May. One-hundred workers with less than three years’ service are being laid off immediately while the other 260 employees will lose their jobs by the end of May.

In addition to layoffs and closures, US Steel has put off long overdue and much needed maintenance and improvements to its Mon Valley Works near Pittsburgh, Pennsylvania.

The $1.2 billion project, having been announced with great fanfare, would have included a continuous casting and rolling line, a cogeneration facility and $200 million in improvements to its Clairton Coke Works, which has had two fires while being repeatedly cited for releasing pollution into the air. The project was set to begin in September was first downsized and has now been completely put on hold. The Mon Valley Works include the steelmaking Edgar Thomson Works in Braddock, the Clairton Coke Works and the rolling mills at the Irvin works in West Mifflin. The three mills employ over 3,000 workers.

ArcelorMittal, the world’s largest steel producer and the number three US steel maker is also cutting back production. Earlier this month the transnational announced plans to lay off hundreds of workers at the Indiana Harbor mill outside of Gary, Indiana. The company announced that it is also closing its iron mine in the Minnesota iron range. Hibbing Taconite will end mining May 3 while all of its 650 workers will be laid off. Cleveland-Cliffs, which recently bought AK-Steel, is closing its Northshore Mining operations in Babbitt and Silver Bay. The closure of the three mines has wiped out over 1,500 jobs.

Many smaller steel companies are also laying workers off. Liberty Steel in Georgetown County, South Carolina is laying off 130 workers as it scales back production, and Evraz Oregon Steel in Portland is laying off 230 out of 600 employees.

The wiping out of jobs in steel production is another nail in the coffin for the United States coal mining industry. It already faces a record number of bankruptcies from declining demand for power generation coal. The shutting down of blast furnaces will lead to a vast drop in metallurgical coal supply, leading to even more mine closures and bankruptcies. Metallurgical coal sells at a much higher price and is much more profitable than power coal.

Before the pandemic, US Steel, Nucor and ArcelorMittal all brought additional capacity online in anticipation of greater demand. While demand rose modestly, the price of steel climbing temporarily to reach a high of $900 per ton, the additional capacity coupled with slowing growth quickly led to a crisis of overproduction and falling steel prices. The corporations rely on older blast furnaces to produce steel while Nucor and Steel Dynamics rely primarily on the newer electric furnaces. The blast furnaces are less expensive and more profitable when running at near full capacity, becoming money losers when capacity utilization falls below 82 percent.

US Steel and ArcelorMittal were themselves aggressively moving towards electric furnaces before the onset of the coronavirus. Late last year, US Steel bought a stake in electric furnace steelmaker Big River Steel for $700 million with the option to buy the rest of the Arkansas-based steelmaker by 2023.

The United Steelworkers, which represent a shrinking but still significant number of steelworkers, is working with the companies to ensure an orderly shutdown of the mills.

During the coronavirus pandemic, the USW has backed the companies’ demands to keep workers on the job without providing proper safety measures and protection, claiming the industry was part of “essential operations” even while the companies were preparing to shut them down. As production and demand collapses, the USW is already pedaling the lie that there is nothing that can be done, and that workers have to wait and suffer until the economy opens up again.

The USW fully embraces Trump’s trade war policies. The USW’s only criticism is that current policies do not go far enough to include autos, appliances and other steel products. By aligning themselves with Trump’s economic nationalism, the misnamed “united” steel workers labor syndicate is trying to line workers up against their co-workers throughout the world and behind US companies.

In the upcoming presidential campaign, the USW will be backing Democrat Joe Biden, himself a strong supporter of trade war measures. He, like Trump, will use anti-Chinese rhetoric to pit workers in the United States against their class brothers and sisters throughout the world.

The Socialist Equality Party urges steelworkers to form rank-and-file factory committees to take the conduct of the struggle out of the hands of the USW, which is nothing but a tool of corporate management and the government.