Confirmed coronavirus cases in the US surpass one million

The number of confirmed coronavirus cases in the United States rocketed past one million over the weekend, with more than 100,000 cases detected in the past three days. The most new cases were recorded in New York, New Jersey, Massachusetts, Illinois, Pennsylvania, California, Maryland and Texas. The tally of the dead also grew to new heights of 56,000. Deaths from COVID-19 in the US are continuing to rise by an average of 2,000 each day.

The United States currently has one third of the world COVID-19 caseload, which stands at three million. While Europe as a whole still has more cases, the US is currently on track to overtake the continent within the next two weeks. Worldwide, the death toll is approaching 210,000.

Amid the ongoing spread of the worst global pandemic in a century, Georgia, Florida, Ohio and Texas are among nearly 20 states that are either launching or preparing to implement over the next week “Phase 1” reopening plans. They are doing so based on the claim that the number of observed new cases has been declining for at least 14 days, and that reopening is thus safe. Collectively, the states that are opening are home to about half of the American population. 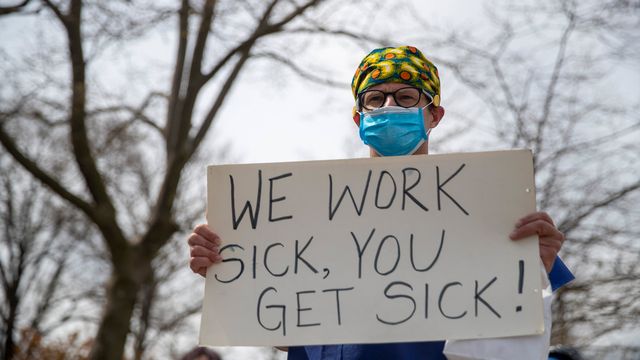 Whatever the claims of the various governors, there is no medical or scientific basis for lifting social distancing and isolation measures. Even a single new case indicates community transmission in a region, which can easily spiral into a spate of new cases as people again begin to mingle in large groups.

New cases inevitably mean new deaths, as more people are exposed to the deadly contagion. The widely cited University of Washington Institute for Health Metrics and Evaluation (IHME) study, which in early April claimed that only 60,000 lives would be lost, and has been used repeatedly to justify reopening, is being blown apart by the pandemic itself. The US death toll from the pandemic will surpass the 60,000 figure in the course of the coming week.

When asked on Sunday’s “Meet the Press” when he thought it would be safe to reopen, infectious disease specialist Dr. Michael Osterholm warned, “We are in the very earliest days of the situation right now.” He noted that for places like New York, which saw a large spike and now a relative decline in the number of new coronarvirus cases each day, “they have to understand that’s not the mountain. That is the foothills. They have mountains to go yet. We have a lot of people to get infected before this is over.”

Osterholm was referencing two basic facts about the current pandemic. First, because hundreds of millions of people have remained at home and thus far not been infected, they are all potential carriers for the virus, and will be exposed to it as they are forced to go back to work or come into contact with people returning to crowded or enclosed areas such as restaurants and bars. Second, there is still no mass testing program in the United States that is capable of giving a clear picture of just how far the virus has spread, nor is there a contact tracing program to test those who have been in the presence of someone who tested positive for COVID-19.

This was made clear over the weekend as testing in New York and Illinois increased. If the virus’s spread were limited, the ratio of the number of people who tested positive to the total number of people tested would go down. Instead, that number in both states remained relatively stable, indicating that the amount of testing is still insufficient to capture just how far the virus has spread.

The actual number of deaths caused by the virus was thrown into further doubt last week by a series of reports that indicated large-scale undercounting. Studies of the “excess deaths” in regions around the world suggest that the current official tallies account for only half of the deaths caused by the pandemic, while other analyses suggest that there may have been 28,000 cases in the US by March 1, rather than the official count of 23.

Such figures were barely mentioned by the American media or political elite over the weekend. The primary concern of the Democrats, as revealed in a segment between House Speaker Nancy Pelosi and Jake Tapper on CNN’s “State of the Union,” is to pass another stimulus bill. Pelosi insisted that the previous bill, which omitted aid to state and local governments and additional food stamp funding, contained no concessions to President Trump. Neither spoke of the states reopening nor of the dangers posed by such moves.

The Democrats are claiming that the next coronavirus bill will provide funding for states and municipalities facing tens or hundreds of millions of dollars in shortfalls from reduced tax revenues. Moody’s Analytics conservatively estimates that $203 billion will be lost nationally through the end of fiscal year 2021, about a fifth of last year’s revenue.

This has been opposed by Republicans in both houses of Congress. Senate Majority Leader Mitch McConnell asserted that the federal budget is not “revenue replacement for state governments.” He also suggested that states should “use the bankruptcy route,” despite the fact that states can’t legally declare bankruptcy.

Either way, the massive shortfall in state budgets will be used as a bludgeon to massively cut social programs such as education, transportation and public health. New York Governor Andrew Cuomo has stated that funding for schools could be cut in half. He also said, “Public transit systems, local police departments, fire departments and even health care systems could see their state aid plunge without more help from the top.”

There is also the likelihood that negotiations on a new stimulus bill will be used by the Trump administration to force states to reopen in exchange for emergency funding.

State and local pensions will also be targeted. Illinois is currently facing a $10 billion hole in its pension fund and is borrowing even greater sums to cover its costs. Nationally, $24 trillion is linked to various forms of retirement funds. The pandemic has been used by both parties to justify massive bailouts to Wall Street. Now it will be used to gut workers’ pensions and vital social services on behalf of America’s corporate oligarchy.