Over 2,000 doctors infected with COVID-19 in Ukraine amid growing protest by medical workers

Ukraine’s Ministry of Health has reported that 2,154 doctors have tested positive for COVID-19, accounting for almost 17.5 percent of the country’s 12,331 confirmed cases. So far, at least 16 medical workers have died from complications caused by the disease.

The high number of infected medical workers is a direct result of the failure of the Ukrainian government to adequately supply and fund its health care workers.

While Ukraine still has fewer COVID-19 cases and deaths compared to other European countries, it is facing the crisis as the government of President Volodmyr Zelensky continues to carry out the right-wing medical “reforms” of the previous health minister, Ulyana Suprun.

Suprun, a US citizen and American doctor of Ukrainian background, first appeared in Ukraine to take part in the 2014 United States-backed “Maidan” protests against elected President Viktor Yanukovych. She later served under President Petro Poroshenko, who was installed after the coup. Suprun championed cutting of direct funding to hospitals, the creation of “competition” among doctors for patients and the closing of hospitals deemed to not have enough patients. Her reforms also entailed banning Russian-made drugs and equipment and the closing of the country’s sanitary-epidemiological service.

During her tenure Ukraine suffered a measles outbreak, unprecedented in modern Europe, and Suprun became one of the Poroshenko regime’s most criticized public figures. While Suprun received strong backing from both the United States and Europe for supposedly fighting “corruption,” a December 2019 poll showed that just 9 percent of Ukrainians considered her reforms “successful.” Suprun was later dismissed by the incoming Zelensky administration in August of 2019.

Despite the fact that current President Volodomyr Zelensky criticized Suprun for the increasing lack of essential medicine and rising cost of care throughout his election campaign, he has pledged to continue with the second stage of medical reforms on April 1 and recently told Bloomberg that he considered the first round of reforms “successful” and blamed widespread opposition to the reforms among Ukrainians on a “lack of understanding.”

As a result of the combined effect of the restoration of capitalism, and the intensification of the assault on the health care system under Poroshenko and continued under Zelensky, the Ukrainian health system now finds itself ill prepared to deal with the pandemic.

The actual number of cases and deaths in the country is likely vastly underreported. In early April, with the virus already widespread in Italy and Spain, and with a large number of Ukrainian migrant workers returning from those countries, Ukraine had tested just 5,779 people, according to deputy health minister Viktor Lyashko. By April 23, the country had increased that number to just 67,520 in a country of approximately 40 million people.

In Ivano-Frankivsk, one of the regions with the highest number of reported infections, doctors reported that tests at the regional level were almost non-existent. Yaroslav Semchyshyn, a doctor at the local level, told Radio Free Europe, “As far as I know, there are no tests even at the district level. I don’t know about the region, there is very little communication.” Semchyshyn also reported that the ministry of health had sent him and his staff of 14 just seven masks a week to use for the entire town hospital.

In addition to lacking basic personal protective equipment (PPE) and test kits, medical workers, already low-paid, are not being paid for the long hours they are putting in, not to mention the increased personal risk.

Recently, Svetlana Fedorova, the chief medical director for infectious diseases in the Nikolaev region, was threatened with prosecution by the government for paying her employees directly for the correct number of overtime hours they had worked. According to local government authorities, her payment to medical workers for overtime hours was a prosecutable “misuse” of funds.

Fedorova has publicly defended her actions, stating, “If, in the opinion of the financial administration of the regional state administration, I violated the law and used the money in such a way that is inappropriate, then we have different goals. My goal is to preserve this institution, in which already a lot is invested. My goal is to preserve the entire team. I am not going to cut us when so very little is left. And this will ensure the epidemiological safety of our region.”

The response by the Ukrainian ruling class to the pandemic has resulted in rapidly growing opposition among medical workers.

In Kiev, medical workers dealing with COVID-19 walked off the job in protest in late April after they were denied hazard pay for dealing with approximately 150 COVID patients. According to reports, two of the hospital’s medical workers had already been infected along with 42 others potentially exposed to the virus. Despite the increased risk, government authorities denied that COVID-19 was present and refused to appropriately pay workers.

Workers reported that many of their co-workers, including nurses, janitors and other hospital personnel, had simply quit in recent weeks rather than risk their lives in dangerous conditions for low pay.

Medical workers at a Kiev psychiatric hospital also walked out. According to Strana.ua, many medical workers had received paychecks in late April that were just a third of what they had made the month before. The average doctor in Ukraine earns a salary of approximately $250 per month.

Throughout the country, doctors have gone on hunger strikes. Inessa Shevchenko, the head of the rehabilitation clinic in the Dnepropetrovsk region, told the media after having been on hunger strike for nine days: “I received 6,000 [$222] and the head nurse of our hospital received 3,700 hryvnia [$137] a month. This is just a third of what we had made before. People are shocked.” 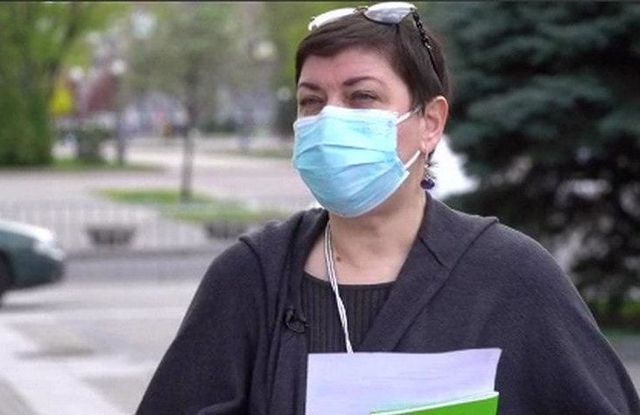 A doctor on hunger strike in Dnipropetrovsk

According to Strana.ua, ambulance workers in the Kiev region are also seething with anger and many talk about leaving their jobs.

Rather than ensure its medical workers are properly paid and equipped, current health minister Maksym Stepanov announced Friday that the Zelensky government is now setting the stage for a potential worsening of the pandemic in Ukraine by joining in with the rest of Europe’s governments to push workers back to work by easing restrictions starting on May 11. At the same time, there is talk about mass layoffs of medical workers at hospitals, many of which are currently only at 25 percent of capacity because of the pandemic.