US government figures released today show mass unemployment in April unlike anything seen since the Great Depression, as the official unemployment rate hit 14.7 percent. According to the Department of Labor, 20.5 million jobs were lost in April, a number far larger than anything ever previously recorded.

Looked at another way, the number of jobs lost so far is equal to the total combined workforce of 25 US states. It is over 38 times worse than the 533,000 jobs lost in November 2008 at the time of the last economic crash.

The reality is even worse, since the official jobs figures for April are based on the state of the economy in the middle of the month. According to a report in Forbes Thursday, “The country is now at 40.6 million unemployed, or 24.9% of the work force. That matches the annual worst year of the Great Depression without considering how many have been unable to file.” 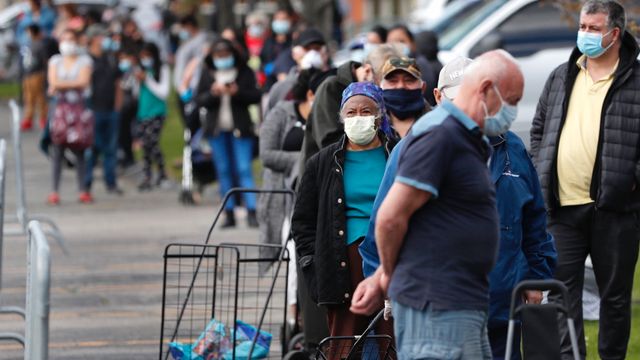 Hundreds of people wait in line for bags of groceries at a food pantry at St. Mary's Church in Waltham, Mass., Thursday, May 7, 2020. (AP Photo/Charles Krupa)

The economic catastrophe is being compounded by the continued refusal of the US government to marshal aid for the unemployed. After handing out trillions to the banks, the ruling class, spearheaded by the Trump administration, is seeking to use social distress as a weapon in its campaign to break down public opposition to the reopening of the economy even as the coronavirus pandemic continues.

Many workers, already struggling in the low wage economy and living paycheck to paycheck, have been left essentially penniless as overburdened and antiquated state unemployment systems have failed to pay out timely benefits.

Meanwhile, a shocking report by the Hamilton Project found that 20 percent of households and over 40 percent of US mothers with children under the age of 13 are experiencing food insecurity.

The death toll in the US is set to exceed 75,000 as the pandemic spreads into more rural areas of the country, many beset by poverty, with older populations and lacking adequate health care infrastructure. A number of states set to relax or eliminate social distancing measures are in precisely those areas where new cases are rising fastest, such as Mississippi, Nebraska and Georgia.

Last week there were an additional 3.2 million new applications for unemployment assistance, bringing to 33 million the number of people who have filed since the outbreak of the pandemic.

These numbers are a serious underestimation. The Economic Policy Institute reported that it found that for every 100 workers able to successfully apply for unemployment benefits, there are another 37 that had tried to file but could not get through the system.

The economic meltdown triggered by the pandemic is metastasizing into a prolonged recession or depression as corporations utilize the crisis to implement permanent layoffs and restructuring. Major manufacturers, including Boeing, GE Aircraft and US Steel have already announced mass job cuts.

The outplacement firm Challenger, Gray & Christmas released its job cuts report on Thursday showing that US employers announced 671,129 job cuts in April compared to 222,288 in March. The April total is 1,577 percent higher than the 40,024 announced job cuts in April 2019.

This week United Airlines said it plans to eliminate 30 percent of its managerial jobs when government restrictions related to the bailout end, probably in October. This will result in the elimination of 3,500 jobs. In addition, the airline will require mangers and administrative workers to take 20 days off without pay between mid-May and the end of September. Earlier this week, United announced plans to lay off more than one third of its pilots, 4,457 positions, by October 1. Other airlines are likely to follow.

On Thursday, department store chain Neiman Marcus filed for bankruptcy. It had temporarily closed all 43 stores in March due to the pandemic. Earlier this week, retailer J. Crew also filed for bankruptcy. Other retail chains such as Lord & Taylor and J.C. Penney are considered vulnerable.

On Tuesday, bed and breakfast network Airbnb said it would lay off a quarter of its 7,500-person global workforce as demand for short-term home rentals plummeted. On Wednesday, ride service Uber announced that it would lay off 3,700 workers worldwide, or 14 percent of its total workforce, mostly customer support and recruiting jobs.

Projections for US auto sales have been lowered from 16 million to just 11 or 12 million, pointing to a likely massive downsizing in the car industry, with a wide-ranging impact on supplier industries.

Small businesses, which account for half of all US employment, are being especially hard hit. Thousands of small businesses, largely shut out of receiving federal stimulus money and already struggling, will likely never reopen.

Companies are also using the pandemic to institute pay cuts. Workers at Stanford Health Care in Palo Alto, California, who treat COVID-19 patents, are protesting an effective pay cut of 24 percent. Employees will be forced to take 12 furlough days over a 10-week period. Many of the workers earn between $55,000 and $65,000 a year.

States and localities continue to stagger due to lost tax revenues. The University of Georgia system voted Thursday to require all faculty and staff to be furloughed or take pay cuts due to budget shortfalls. Employees will be required to take either four or eight uncompensated furlough days depending on their pay grade.

There has been an unprecedented increase in hunger and food insecurity across the United States as tens of millions lose their livelihoods. Food lines are now common. On Wednesday residents in the Corona neighborhood of Queens, New York waited outside a local food pantry in a line extending half a mile.

In the state of Hawaii, cars lined up for more than a mile outside Aloha Stadium to receive 50 pounds of free food. Organizers estimated that 100 tons of food were distributed to 4,000 households.

Most of direct food aid comes from private donations, with state and local governments chipping in pathetically inadequate amounts.

The report released by the Hamilton Project this week found that rates of food insecurity in April 2020 were significantly higher than at any point for which there is data between 2001 to 2018, including the 2008-2009 economic crash.

After a near unanimous vote to enact a multi-trillion-dollar corporate bailout, Congress is bogged down in squabbling over a pathetic 15 percent increase in food stamp aid. The proposed increase, being blocked by Republicans, would provide an average increase of only about $35 a month to the typical household eligible for the program.

Ever tightening restrictions to the program enacted by Republican and Democratic administrations have forced millions out of the program even as need has risen.

The COVID-19 pandemic has thrown a sharp light on the irrationality of the accumulation of private wealth as the motive principle of society. Instead of prioritizing the fight against the pandemic and alleviating human suffering, countless billions are squandered on propping up Wall Street and massive funding of the war machine.

The American oligarchy decides for death
[5 May 2020]