The family of Breonna Taylor has filed a lawsuit in Jefferson County Circuit Court against three members of the Louisville Metropolitan Police Department (LMPD) for wrongfully shooting the 26-year-old woman to death in her apartment on March 13.

According to the complaint submitted on April 27 on behalf of the young woman’s mother, Tamika Palmer, Breonna Taylor and Kenneth Walker were asleep early in the morning when officers barged into Breonna’s apartment without knocking or announcing themselves as police and began shooting indiscriminately.

The legal brief says, “The Defendants then proceeded to spray gunfire into the residence with a total disregard for the value of human life. Shots were blindly fired by the officers all throughout Breonna’s home and also into the adjacent home, where a five-year-old child and a pregnant mother had been sleeping. Breonna was shot at least eight times by the officer’s gunfire and died as a result.” 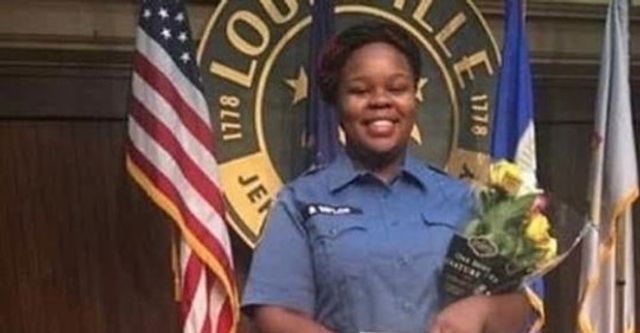 Breonna Taylor, 26, was killed by police when she was shot at least eight times during a "no-knock" search warrant of her apartment on March 13.

The lawsuit further states, “Breonna had committed no crime, posed no immediate threat to the safety of the defendants and did not actively resist or attempt to evade arrest prior to being repeatedly shot and killed by the defendants.”

While the three policemen—LMPD Sgt. Jonathan Mattingly and officers Brett Hankison and Myles Cosgrove—have not been charged in the death of Taylor, Walker is facing first-degree assault and attempted murder of a police officer charges because he fired his own gun at the police, injuring one of the three.

The LMPD has maintained that the officers were serving a “no-knock” warrant as part of a narcotics investigation when they burst into Taylor’s apartment. The police were allegedly investigating the activity of two individuals involved in selling drugs more than ten miles away in Jefferson County.

The police have also maintained that they announced themselves before using a battering ram to enter the apartment where Taylor and Walker were asleep. But both Taylor’s family members and neighbors maintain the police officers never identified themselves and the two believed someone was breaking into their apartment.

The police have also maintained that they obtained the “no-knock” warrant because one of the narcotics investigation suspects, Jamarcus Glover, had a relationship with Breonna Taylor two years prior. According to the warrant, police say that they observed Glover retrieve mail from the apartment two months prior to the deadly incident on March 13.

However, it has been established by Taylor’s attorneys that Glover had been “located and identified by LMPD before the warrant being executed at Breonna's home.” Meanwhile, in an affidavit signed by a judge less than three hours after Taylor was pronounced dead at the scene, one of the officers maintained that the young woman had fired the gun at the police, not Walker.

Sam Aguiar, a Louisville-based attorney representing Taylor’s family, told the media at a press conference Wednesday, “It seems to me like they’re just trying to cover their tracks from day one. And every single time they keep saying things that conflict with former things, that really just looks like they’re so desperate to cover this up and it’s why getting the truth in this case is so important.”

Aguiar also said, “If they really thought that Breonna [Taylor’s apartment] was a place for him [Glover] to pick up packages and that these packages contain things that they shouldn’t, why in the world are they waiting until the middle of March to execute a no-knock drug raid?”

On Tuesday, Louisville Mayor Greg Fischer commented publicly about Taylor’s killing for the first time via Twitter, writing in part, “The Breonna Taylor case is currently under investigation. Therefore, expansive comments are not appropriate until all the facts are known. I have spoken with LMPD Chief Steve Conrad about this case and he is well aware of the need for a thorough investigation. Once LMPD’s Professional Integrity Unit has completed their investigation, the report will be given to the Commonwealth Attorney who will check for thoroughness and fairness before making a determination on next steps.”

Clearly, after two months, Mayor Fischer has been forced to comment on the brutal killing of Taylor only because the family has filed a wrongful death, excessive force and gross negligence lawsuit against the officers. Additionally, other instances of police violence as well as the refusal for 73 days of prosecutors to charge the men who shot and killed Ahmaud Arbery in Brunswick, Georgia are once again putting a spotlight on the criminal operations of law enforcement in cities and towns across the US.

Breonna Taylor’s family is being represented by Benjamin Crump, the attorney who is also representing the family of Ahmaud Arbery in the case against Travis and Gregory McMichael, the men who chased him down and killed him on February 23.

In a statement to the media on Monday, Crump said, “We stand with the family of this young woman in demanding answers from the Louisville Police Department. Despite the tragic circumstances surrounding her death, the department has not provided any answers regarding the facts and circumstances of how this tragedy occurred, nor have they taken responsibility for her senseless killing.”

Taylor was an Emergency Medical Technician working the front lines of the COVID-19 pandemic and there is both anger about her killing by the police along with enormous sympathy for her family within the working class.

A sense of the public outrage over the killing of Taylor and the silence for two months by authorities can be seen in the hundreds of responses on Twitter to Mayor Fischer’s statement, which are overwhelmingly hostile.

One reader wrote, “This is a horrible statement devoid of any compassion for Breonna Taylor's family. It’s amazing that Kenneth Walker could be charged with attempted murder right away but we need 60+ days to investigate the police by the police.”

Another commenter posted, “That they didn’t give this investigation to an outside agency suggests they are leaving it up to the police for a full coverup. There’s no way cops will find cops responsible in this episode.”

And another wrote, “Here we go again. Another Murder COVER-UP. 2 months later. It's always difficult to investigate when the police are the COLD BLOODED KILLERS with a History of Corruption.”