Over 11,000 people in central Michigan were evacuated from their homes on Tuesday and Wednesday as historic rains swelled the Tittabawassee River and breached two aging and neglected hydroelectric dams. The Edenville Dam collapsed Tuesday evening, and the downriver Sanford Dam was in danger of collapsing as of Wednesday night, according to county officials.

The dams are immediately upriver from Midland, Michigan, a city of 42,000 people 125 miles northwest of Detroit, which is home to the headquarters of Dow Chemical that includes a sprawling toxic chemical complex along the city’s riverbank. The failure of the dams has sent millions of gallons of water rushing downstream, inundating communities and sweeping away homes along the way. Since the Tittabawassee is a tributary of the Saginaw River, which flows into Lake Huron, any contamination by toxic chemicals would threaten the Great Lakes, the largest body of fresh water on the planet.

The catastrophe unfolding in central Michigan is the result of decades of neglect to critical infrastructure and the impact of man-made climate change, which will be compounded by the criminal poisoning of the regional environment by Dow Chemical and the deepening crisis of the coronavirus pandemic. 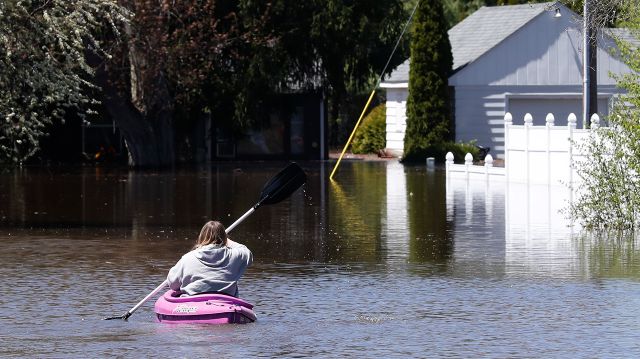 Media footage of downtown Midland has shown streets and buildings submerged in as much as 12 feet of water. Several bridges have collapsed across Midland County, and dozens of roads are washed out, making it nearly impossible for trapped residents to flee. The smaller adjoining Rifle River in Arenac County had also swelled to record levels, forcing door-to-door evacuations.

Thousands of families across multiple counties are without power, and boil water warnings have been issued to all residents using groundwater wells in the regional watershed. Evacuation centers at nearby schools and business buildings have been assembled with displaced residents forced to gather, sometimes in the hundreds as was the case at Midland High School on Tuesday, in close quarters amid the highly contagious and deadly coronavirus pandemic.

Over 150 elderly residents, many in walkers and wheelchairs, had to flee the downtown Riverside Place senior home, some forced into the crowded evacuation centers. One exasperated unemployed worker who was also forced to flee his apartment commented to the Detroit Free Press from an evacuation center, “I’m just waiting for the meteor.”

On Tuesday night, Democratic Governor Gretchen Whitmer declared a State of Emergency for Midland County, and surrounding counties were put on flash flood alert. By early Wednesday, the New York Times was reporting it was likely that the surging floodwaters would overwhelm the levees protecting the Dow Chemical compound.

Wednesday afternoon, Dow announced on its Facebook page that “there were flood waters comingling with on-site containment ponds.” The industrial company is notorious for its criminal industrial pollution practices and has thus far provided no public assessment of any potential risk of its toxic facilities to the surrounding region in the event that floods overtake the complex.

Flooding has already reached historic levels. The Tittabawassee River was expected to crest by Wednesday afternoon at 38 feet, which is 14 feet above existing flood staging, according to Midland city manager Brad Kaye. The flood levels have surpassed the previous state record set in 1986 by almost five feet. The “Great Flood of 1986” in central Michigan inflicted over $1 billion in damages, when adjusted for inflation, and damaged or destroyed nearly 30,000 homes. Wednesday’s flood damage will undoubtedly far surpass that toll.

At least one of the two failed dams, the 96-year-old Edenville Dam, had been cited for numerous safety violations against multiple private owners going back several decades. The current Edenville dam owners Boyce Hydro Power LLC, which also own the failed Sanford dam downriver, had their power generation license revoked in 2018 by the Federal Energy Regulatory Commission (FERC). The main infraction, according to 2017 court records, was for the company’s long-standing refusal to increase the dam’s spillway capacity, which the FERC asserted, “could not handle 50% of a probable maximum flood for the region.”

The decaying Edenville dam is not alone, as it is part of a larger network of social infrastructure that has crumbled under the neglect of state and federal governments across the state and country. Multiple times in the past decade, the American Society of Civil Engineers (ASCE) has given the United States a grade of ‘D+” on the condition of its overall infrastructure. In 2017, the ASCE estimated that at least $125 billion would be needed to upgrade and safe-standard aging levees and dams alone. The average age of dams across the US, many woefully in need of repairs and financial upgrades, is 57 years.

The failed dams upstream from Midland were classified as “high hazard potential” by the US Army Corps of Engineers, meaning that dam failures would be likely to result in loss of life for a variety of reasons. Currently, 170 dams across Michigan have this designation and another 151 dams are rated with a “significant hazard” designation, based on their potential for economic and environmental damage in the region if failure were to occur. This accounts for nearly one third of all the dams in the state.

There is also the added impact of global warming. Contrary to the claims by Governor Whitmer and other state officials that this was a “once-every-500-years flood,” the arrival of “historic” floods in the United States is now the norm and not the exception. The surge of extreme weather events over the last two decades—such as Hurricanes Katrina, Sandy and Maria, or the historic flooding which has devastated Midwestern agricultural regions, including as recently as June of 2019—are widely agreed by scientists to be the result of rising global temperatures.

But perhaps most insidious is the long-standing role that Dow has played in criminally poisoning the region’s environment and leaving behind industrial waste that could now be swept away in the flood waters. The $85 billion company, one of the three largest chemical manufacturers in the world, produces products such as Saran Wrap and Styrofoam. But it is also infamous for its development of mustard gas and the chemical Agent Orange, both of which were used to inflict highly cruel and hitherto unknown methods of killing in World War I and the Vietnam War respectively.

If surging floodwaters do in fact breach Dow’s containment ponds and chemical storage tanks, it could potentially devastate the regional farmland and river downstream.

In addition, for decades Dow has dumped poisonous chemicals and waste runoff into the Tittabawassee River with virtually no repercussion. A particularly notorious example is the highly toxic and cancer-causing byproduct of herbicides and chlorinated chemicals known as dioxin. Known river and soil contamination from dioxin stretches at least 50 miles downriver from Midland across the Saginaw watershed and throughout the “Tri-Cities” region, which also includes Saginaw and Bay City. The region is home to nearly 500,000 people.

Heavily polluted Superfund cleanup sites downriver from the Midland plants also pose a significant danger. Professor Allen Burton noted to the New York Times that the risk downriver is that surging flood waters will almost certainly stir up contaminated sediments on the river floor, where dioxin settles, and will spread pollution downstream and over the riverbanks.

“You worry about the speed of the current, this wall of water coming down the river,” he said. “It just has a huge amount of power that could very easily erode earthen dams and levees in place.”

For its part, Dow has never had to worry about any legal repercussions and vigorously denies all poisonous health impact of their chemicals to river and soil. In fact, a former lawyer of nearly two decades for Dow, Peter C. Wright, now runs the Superfund toxic cleanup program within the Trump administration’s Environmental Protection Agency. Just three years ago, Wright was leading Dow’s efforts to develop a legal strategy to thwart regulators and whistleblowers.

Steve, a worker from the Midland area, spoke to the WSWS about the toxic threat posed by the floods. “Midland is a company town, that supposedly couldn’t do anything wrong, but there was a lot of people were angry. The company had the nerve to say the only reason the state government knew about the dioxins is because Dow told them. I’m sure, Michigan’s Department of Environmental Quality, which oversaw the disaster in Flint, has been equally willing to look the other way when it comes to Dow.”

“If the floodwaters get contaminated with the chemicals, it will be a catastrophe. The water and chemicals will be carried past Midland, to Freeland and into Saginaw.”