On Thursday night, a mysterious illness caused several B Crew workers at the Jefferson North Assembly plant in Detroit to collapse. This is occurring under conditions where Fiat Chrysler, while confirming that cases of COVID-19 have been discovered at its factories in North America, has not given any details on the number or location of these cases.

Reports on Facebook last night pointed to an outbreak of illness at Jefferson North that caused several workers to be “carried out on stretchers.” Other reports on Facebook earlier this week referred to a number of COVID-19 cases at various Fiat Chrysler Automobiles (FCA) plants, including Jefferson North, but no confirmation has been forthcoming from the United Auto Workers or management. There have been no interruptions to production. 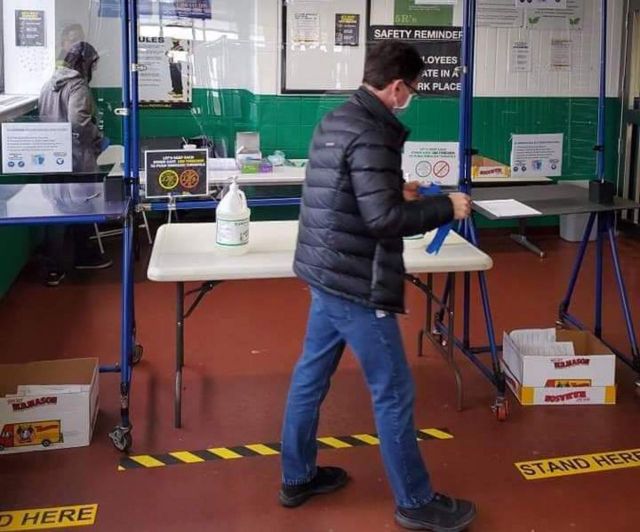 Jefferson North being prepared for restart

One worker wrote, “Three people taken out on stretchers so far at JNAP tonight. 3 vomited all over the line and few fainted.”

A second replied, “Somebody just collapsed on A2 yup.”

Another said, “You know they are not stopping that line.”

As reported, production was never stopped, but several workers were asked to stay over after the end of the shift to clean up.

Workers speculated that the illness was produced by the combination of hot temperatures inside the plant and air constriction caused by wearing facemasks.

“It’s quite simple. It’s hot,” said one worker. “You’re wearing a mask, and you’re breathing in your own oxygen. It’s a very bad combination. And it’s going to cause worse damage on the human body than fainting and vomiting in long haul.”

A worker noted that the high temperatures made it difficult to get an accurate reading on the body temperature tests taken by management when workers entered the plant.

“They have a temp machine stationed upon entering the plant, but I don’t see how that’s working when you are hot already from being outside in 90 degree weather. Some people are already sweating walking up to it.” 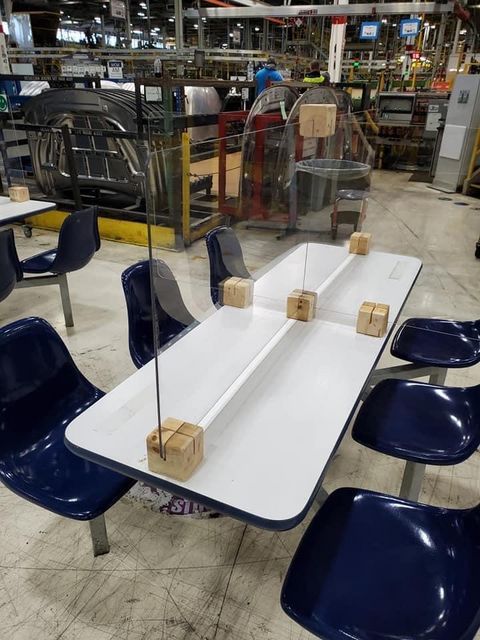 Break room at Jefferson with dividers

Several Jefferson North workers contacted by the World Socialist Web Site Autoworker Newsletter said that in the years they had been working at the plant, they had never seen anyone collapse from the heat. It should be noted that nausea is one symptom of COVID-19 infection.

A young worker at JNAP told the WSWS, “It was real bad. At least four workers were sick. One, I think, had asthma, and the word is they’re better. But it’s hot, and we’re wearing these masks, and it’s very difficult to breathe. This can’t go on like this. Workers were getting ready to walk out.

“The company is forcing TPTs (temporary part-time workers) to work 60 hours instead of 40 hours a week. Workers were asking the union stewards how the company could get away with this, and all they would say was that the company had the right to do it, according to the contract.

"But the UAW negotiated the contract. Working these extra hours means you have a 50 percent higher chance of catching COVID.”

There has been no update on the condition of the workers who were taken off the line and no explanation of what happened. Nothing has been said as to whether the workers are being tested for the coronavirus.

A worker told the Autoworker Newsletter that a number of workers had tested COVID positive at the Faurecia plant in Saline, Michigan. The worker said that management had sent the Jeep line home and kept the rest of the plant working. He added that a “loaner,” a low seniority worker who shifts from line to line to fill in, had tested positive.

After the discovery of several COVID-19 cases at Ford plants, including one this week at Chicago Stamping, one at Louisville Truck and another at Kansas City Assembly, management issued a revised set of protocols. Basing itself on what it claimed to be updated recommendations from the Centers for Disease Control, Ford management said it would no longer close plants for 24 hours in case of a COVID-19 outbreak.

In fact, the CDC recommendations have not changed. Rather, management is heeding the advice of Wall Street lenders, who demand that production continue at all costs, workers’ health be damned.

These developments underscore the need for workers to take matters into their own hands through the building of rank-and-file workplace committees to oversee health and safety. Such a committee at Jefferson North would demand a halt to production until a full explanation of the sudden outbreak of illness was provided.

Workers have complained about the near impossibility of working with facemasks under the hot conditions prevailing in most auto plants. If masks must be worn, adequate cooling and air circulation must be provided and workers given longer break times.

Workers continue to stress their opposition to the inadequacy of the safety protocols implemented by management, including daily temperature checks but not including COVID testing. Monica, a worker at the Fiat Chrysler Dundee Engine Plant south of Detroit, spoke to the Autoworker Newsletter. She said, “I think it’s too soon for us to be going back. It is also not fair that they are testing upper management to see if they are corona-free. So why haven’t they been testing us? You simply don’t know if someone is ill unless testing is done.

“As far as the UAW goes, they are actually not doing very much for us. They say they’re going to take care of us, but we all know that it is really about making profits. Before the coronavirus thing, this plant was the cleanest I had ever worked in. I was happy about that, I like that. But that doesn’t mean it is safe now. Taking everyone’s temperature before they come in is not really a solution because you can have it and spread the virus without even knowing you have it.”

A worker at Chicago Ford Assembly said, “Big issues at the plant. All the cleaning and safety measures are pretty much half-assed, and it’s only the second week. Hand sanitizer stations are out of hand sanitizer. They’re only supplying medium- and small-size gloves. You go through like five pairs of gloves just trying to put them on. The bottles of disinfecting solution are empty.”

Auto companies are pushing forward with the expansion of production, with some workers scheduled for 60 hours a week. General Motors will move from one shift to three shifts on Monday at plants in Flint, Michigan; Fort Wayne, Indiana and Wentzville, Missouri. The plants build pickup trucks, such as the Chevrolet Silverado and others that have been moneymakers.

The company will move to two shifts at its Spring Hill, Tennessee and Ingersoll, Ontario facilities. The Lansing Grand River and Lake Orion plants in Michigan will reopen with one shift, as will plants in Arlington, Texas and Bowling Green, Ohio.

The delayed reopening was not the result of concerns over COVID-19 transmission. It was due, rather, to parts shortages as suppliers, particularly plants in Mexico, restart production.

In response to the expanded work schedule, United Auto Workers spokesman Brian Rothenberg issued a scripted statement claiming that the union will “vigilantly monitor the implementation of health and safety protocols protecting our members, and we will continue to advocate for as much testing as possible and full testing when available.” Meanwhile, the UAW is helping GM suppress all reporting on COVID-19 cases.

Like the other Detroit automakers, GM is determined not to let COVID-19 interfere with production. Jim Cain, a GM spokesman, confirmed in an e-mail Friday that some employees tested positive for COVID-19, but he would not give any further details on the number or locations. “The circumstances around each case were different, but none required production to be paused,” he wrote, adding, “We are not providing statistics on COVID testing.”

Automakers expand US production, even as COVID-19 cases increase
[29 May 2020]