Miles Davis: Birth of the Cool
Impressive raw material, but a non-committal approach

The documentary Miles Davis: Birth of the Cool, aired on PBS in February as part of the American Masters series and released on Netflix in April, takes up the life and musical career of one of the most renowned American jazz musicians. The WSWS briefly commented on it when it was debuting at film festivals in 2019.

The film is directed by documentarian Stanley Nelson, who has produced a long list of films about social-political developments and figures of the 20th century. These include The Black Panthers: Vanguard of the Revolution (2015), Freedom Riders (2010) and The Murder of Emmett Till (2003), among others. 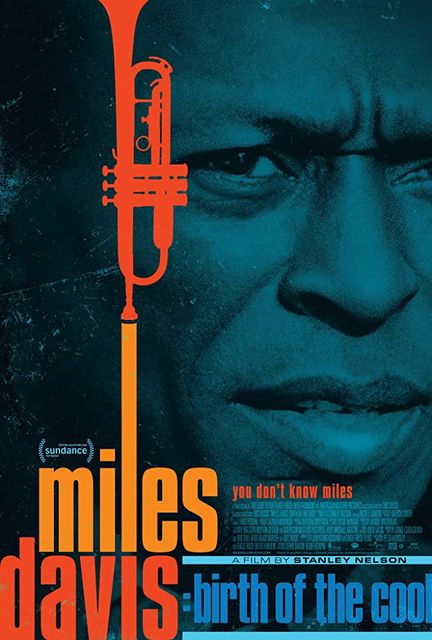 Miles Davis–Birth of the Cool

Few musicians were involved in as many stages of development in jazz, or popular music generally, after World War II as Miles Davis (1926-1991). His artistic efforts delved into or straddled everything from straight-ahead bebop and hardbop jazz, blues, classical composition, show tunes, ballads, funk, soul and various shades of rock and electronic music, along with elements of South Asian, Spanish and African musical traditions.

He is also very likely one of the two most important trumpet players of the 20th century, along with Louis Armstrong, in terms of his impact on the direction of jazz. As a player, composer and bandleader, Davis shifted his musical approach at least a half-dozen times during his career, and in the process he worked with or influenced nearly every significant figure in American jazz between 1944 and 1991. Summarizing his career would be a tall order for any researcher, writer or filmmaker.

In Birth of the Cool, Nelson has assembled an impressive collection of photos, concert footage and personal interviews to provide an accounting of Davis’s life from birth unto death. While this collection in and of itself is fascinating, particularly interviews with former bandmates and his ex-wife, the ballet dancer Frances Taylor, the film overall is weighed down by multiple and conflicting elements, none of which is thoroughly worked through.

On the one hand, there is a wealth of biographical material here. Born into an affluent family and raised in East St Louis, Illinois, Davis was considered a musical genius by his teachers and peers at an early age. As he was graduating high school, Davis was able to sit in with the Billy Eckstine band in St. Louis, which at the time featured pioneering bebop trumpeter Dizzy Gillespie and saxophonist Charlie Parker. 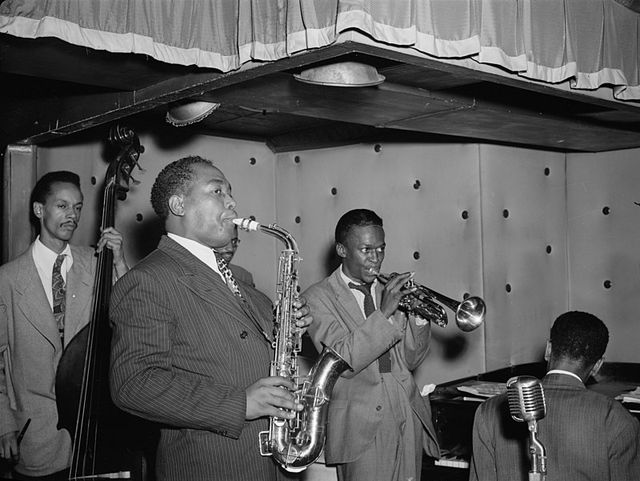 Bebop music—with Parker as its most important representative—galvanized an entire generation of jazz musicians and artists after World War II. With its emphasis on rapid and complex chord progressions, numerous changes of key, instrumental virtuosity and improvisation without sacrificing harmonic structure or melodies, it represented a move away from the big-band swing music of the previous decade. It reflected in part the changing, hectic pace of industrial and urban life for workers and youth, as well as new cultural and social expectations and demands, and it took root in the bustling cities and nightclubs of the American Midwest and Northeast.

Davis emerged as a trumpeter in New York just as bebop was cresting as a major artistic trend. He had enrolled in the prestigious Juilliard School in Manhattan to study classical composition and music theory because, according to the documentary, he “wanted to see what was going on in all of music.” Yet the pull of the nightclub bebop scene was much stronger than that of the classroom and the former gave him his early musical apprenticeship, from about 1944 to 1948. He dropped out of school to play for Parker, as well as with Gillespie.

Even early on, however, Davis demonstrated a strong impulse to explore his own path in music. An ambitious and almost obsessive pursuit of new musical modes of expression was a constant theme in Davis’s career. This process is captured with a degree of success in the documentary, at least in regard to the first half of Davis’s career.

By 1948, he was trying to meld elements of classical music with aspects of bebop, producing a more patient and “rounded” sound, built around Davis’s emphasis on the middle register of his instrument and broader jazz orchestration. The product was a more relaxed and methodical sound, contrasted to the up-tempo ferocity and propulsion of bebop. 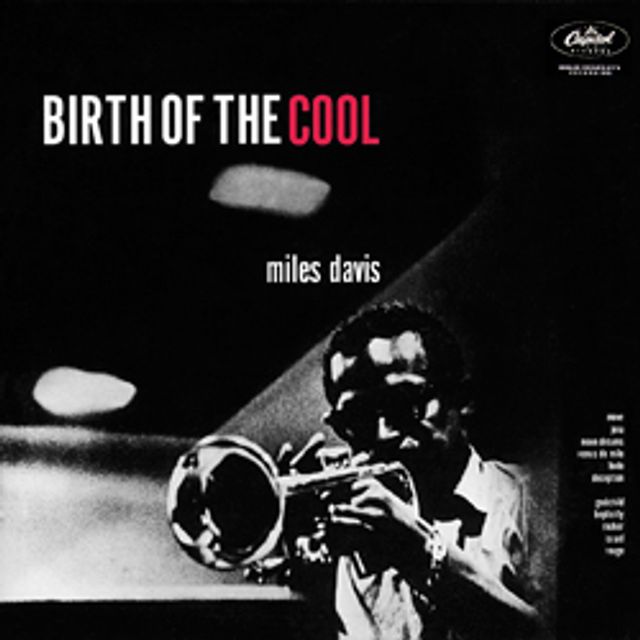 Davis also assembled his first studio band during this period, a nonet which featured among others the talented saxophonists Gerry Mulligan and Lee Konitz, as well as a tuba and French horn player. Konitz tragically passed away last month from COVID-19. The early sounds of this period are usually referred to as the “cool,” or sometimes “West Coast jazz,” culminating in Davis’s first important album Birth of the Cool (recorded in three sessions in 1949-50, but not released until 1957).

By the early 1950s, Davis had become a distinct new voice within jazz. He began exploring more ballads and using a Harmon mute to give his trumpet playing its now well-known dulcet quality. Songs like “It Never Entered My Mind” and “Bye Bye Blackbird” are good examples of his ability to convey vulnerability and beauty, while avoiding sentimentality and nostalgia.

Above all, he became a pioneer in letting the space between notes linger, creating a moodiness and intrigue which found its most moving expression in his 1959 masterpiece Kind of Blue, still the highest-selling jazz album of all time.

The documentary is most intriguing when it engages with Davis’s musical development from the late 1940s through the mid-1960s. Nelson features interview statements from the remaining living members of the two world-class quintets Davis assembled between 1955 and 1968, which included John Coltrane (saxophone), Paul Chambers (bass), Red Garland (piano) and Jimmy Cobb (drums) from 1955 to 1959; and Herbie Hancock (piano), Wayne Shorter (saxophone), Tony Williams (drums) and Ron Carter (bass) from approximately 1960 to 1968.

Comments scattered throughout Birth of the Cool from Carter, Cobb, Shorter, Hancock and others such as saxophonist Jimmy Heath and pianist Archie Shepp shed interesting light on Davis’s musical brilliance, persona and, at times, painful contradictions. Included in this group would also be Davis’s second wife, the lively Frances Taylor, and his childhood friend Cortez McCoy. Sadly, Taylor, Heath and Cobb have all passed away since being interviewed for Nelson’s film—Cobb just within the last two weeks.

Unfortunately, the same praise cannot be extended to many of the academics interviewed in the film. They mostly tend to emphasize the “mythological” side of Davis’s defiant personality, and generally offer little insight into his experiences with racism and the broader social currents at work during his lifetime. The infamous racist police beating Davis suffered in 1959 outside a New York nightclub is not treated, for example, with an eye to the social environment and atmosphere in which it occurred.

The film is largely non-committal when it comes to the big historical issues, and this contributes to one’s dissatisfaction and even disappointment. Nelson is well aware that he needs to address “the times,” but he attempts to capture extraordinary social and political developments by inadequate means, employing approximately 30-second montage clips, in rapid-fire progression, on the events of 1944, 1955 and 1969 at different points in the film.

The documentary contains virtually no analysis of critical episodes such as the Civil Rights movement, only a passing comment on the Vietnam War and the worldwide rebellions taking place in the 1960s and 70s, and very little of Davis’s own views on such events. His involvement, for instance, with the anti-apartheid movement in South Africa during the last decade of his life is hardly touched on. 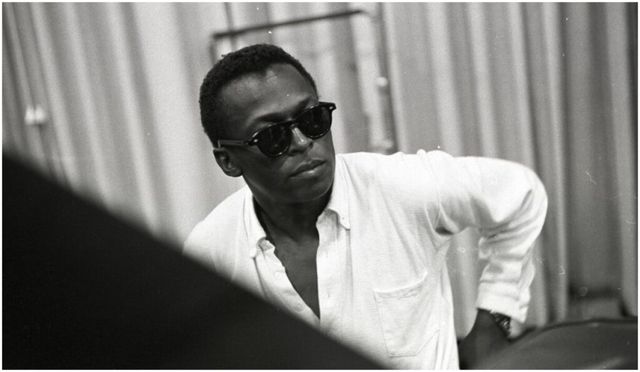 Nelson also employs a first-person narration device to guide the film. Veteran actor Carl Lumbly imitates Davis’s raspy tone throughout. This technique actually limits the ability of the filmmaker to observe and comment on the musician in a more objective fashion. We generally only hear Davis’s comments on certain episodes of his own life, but the documentary never takes a wider view of things that concern Davis—racism, drug addiction, war, poverty and so forth.

Each of the three years briefly highlighted in Birth of the Cool marked a turning point in Davis’s musical career: in 1944, he made his entry into the bebop scene with Parker; in 1955, he assembled his first great quintet; and, in 1969, he turned to electric jazz and rock fusion. The latter turn is heavily associated with his experimental electronic-infused freeform album Bitches Brew (1969), also among the highest-selling of Davis albums.

The latter turn by Davis to “jazz fusion” during the years 1969 to 1975 was controversial. Davis decided to expand his band dramatically—for instance, using four percussionists and three keyboardists at certain points, and as many 20 players at times, to try and fuse components of jazz improvisation with elements of rock, soul, funk and electronic instrumentation. It represented a dramatic turn, particularly for jazz’s greatest living representative at the time. His popularity increased due to the move, however, and it would have an impact on a new layer of jazz and popular music artists for years to come.

Outside of some discussion of Bitches Brew, Nelson largely breezes through this period. The film would have done better to explore Davis’s thoughts and motives here with more seriousness. This period of Davis’s career still sharply divides musical public opinion. Admirers contend that Davis was making “ground-breaking” music, while critics argue that his efforts were dull and self-involved without offering much of anything an audience could actually seize hold of. The musician’s own comments seem to imply he made the shift almost as a money-grab, from jealousy regarding the commercial success of rock ‘n’ roll musicians of the time, toward whom he felt artistically superior.

In any event, the final third of Nelson’s documentary passes over portions of Davis’s life much more rapidly than it does the first two-thirds. There is not much on the last fifteen years of his life musically, before he passed away prematurely of a stroke at 65 in 1991. These are difficult years to assess, partly because they were a very challenging time for the development of jazz as a whole. With a few exceptions many prominent jazz musicians—not just Davis—hit something of an artistic wall during the late 1970s through the early 1990s, in terms of vibrancy and growth.

No doubt anyone would find Davis’s complex career and body of work difficult to summarize in less than two hours, because in addition to the many musical questions they raise, they are so bound up with the contradictions of American postwar life. Nelson does a useful and effective job of gathering and ordering the raw material for such an evaluation, and Birth of the Cool has many intriguing and worthwhile moments. But he tends to take the easy way out when it comes to reaching any deeper and more enduring conclusions about either Davis’s career or the historical period itself.