As of May 25, there had been more than 15,300 confirmed COVID-19 cases among meatpacking workers across 192 plants and in communities tied to facilities of the primary meat companies JBS USA, Tyson Foods, and Smithfield Foods. One month prior, confirmed cases stood at just over 3,000. 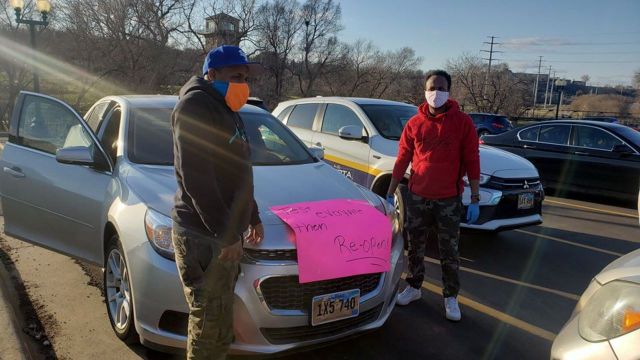 A report by the Washington Post noted that the number of Tyson workers alone that have contracted COVID-19 rose from less than 1,600 in April to more than 7,000 in May. According to the Midwest Center for Investigative Reporting, deaths of meatpacking workers more than tripled from 17 to 63 in the same month. In addition to the deaths of meat processing workers, four health inspectors for the US Department of Agriculture have died as a result of contracting the virus while completing inspections.

According to the Environmental Working Group, COVID-19 cases among meatpacking workers respectively represent 18, 20, and 29 percent of total state cases in Iowa, Nebraska and South Dakota. The EWG also reported that COVID-19 infection rates occurring within a 15-mile radius of meat plants and operations stand at double the national average.

Emails and messages obtained by the Kansas City Star and the Wichita Eagle, Kansas show officials loosened guidelines after Tyson expressed concern about absenteeism of workers who were documented to have been exposed to the virus and on guidelines of two-week quarantine. The company successfully pushed for Kansas state officials to ultimately lift these guidelines and allow exposed employees who were initially asymptomatic to be scheduled to return to work.

Substantial further surges in COVID-19 outbreaks and infections among meatpacking workers can be expected following President Trump’s executive order mandating the reopenings of meat processing facilities. Since the systematic reopening of plants new outbreaks have occurred at four of the reopened facilities. This has resulted in over 700 new COVID-19 cases among workers as of May at the Smithfield plant in Sioux Falls, South Dakota Tyson Foods plants in Logansport, Indiana, and its Iowa plants in Perry and Waterloo.

On May 21, the LAist reported that an outbreak of COVID-19 had occurred at Smithfield’s Farmer John plant in Vernon, California with more than 140 meatpacking workers testing positive for the virus. The Vernon plant is known for producing the ‘dodger dog’, the hot dog sold at the LA Dodgers baseball games.

In Wilkesboro, North Carolina, a 570 of 2,240 workers at a Tyson chicken plant complex tested positive for COVID-19, a majority of them having shown no symptoms. The plant shut down for five days as a result. Most of the tests were administered from May 6 to May 9 and took days to get results. The plant was still operational before the test results came back, making it very likely that the virus spread to other workers before its brief closure.

Nearly 600 workers at a Tyson chicken plant in Wilkesboro, North Carolina tested positive for COVID-19 after the plant reopened following a deep cleaning. Tyson is also still operating a plant in Sherman, Texas, despite a death in the plant. The worker, who was a forklift operator in the plant, had received a test but had not received his results. While he was waiting for his results, he was told to report to work or be fired. 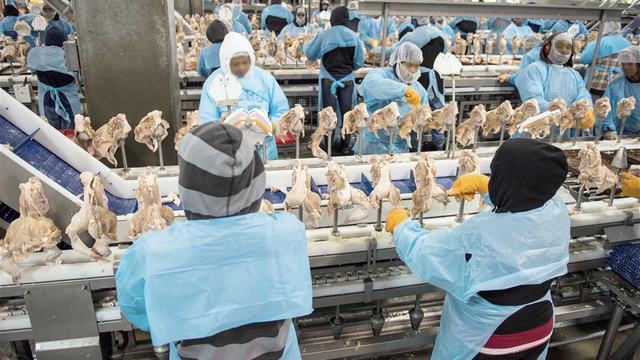 Just the week before the Texas Department of Emergency Management had tested every employee in the plant, with results eventually showing 326 out of 1,745 workers infected with COVID-19.

One worker who wanted to remain anonymous told local news, “Today they were just coming basically as they were getting results in, they were coming and getting people and escorting them out of the building and telling them to go on a 2-week quarantine.”

On May 19, a group of workers from the Sherman Tyson plant, some who had tested positive for the virus, demonstrated outside of the facility to demand the shutdown of the plant to stop the further spread of the virus.

Blanca Parra, the wife of the forklift operator who died of COVID-19, told local news, “The virus was the gun that killed him but Quality Sausage was the hand that pulled the trigger… We are asking for justice because the company and the people who made the decision to continue working and putting people at risk need to be held accountable.”

The temporary reduction in the output of processed meat due to closures, reduced operations and worker absenteeism is being partly offset with the use of prison labor. In an exposé published by The Appeal online journal, it was confirmed that at least two Louisiana poultry plants—the Foster Farms plant in Farmerville and DG Foods in Bastrop—have been using labor from prisoners through the Transitional Work Program. The video included in the exposé shows unsanitary conditions in a poultry facility bathroom with dirty and soiled floor, standing water, empty toilet paper rolls and unstocked soap dispensers.

Prisoners, an already acutely vulnerable to COVID-19 transmission, face the added pressure of coercion. Many fear making complaints over safety under threat of losing work or having their credit toward early release on good behavior penalized.

The surge in COVID-19 cases among meatpacking workers occurs alongside a forced 25 percent production speed up coordinated between industry executives and the US Department of Agriculture. In 2019 the US Department of Agriculture allowed pork manufacturers to abolish limits on production line speed. Limited safety measures, where they have been implemented at all, are undermined by speed-ups and increase workers’ chances of being exposed to the virus.

Celeste Monforton an occupational health and safety expert at Texas State University told the Washington Post, “It was bad policy to begin with, but now I think it is irresponsible to do it — this is an infectious disease.

“Line speeds have an impact on how close the workers have to be,” she continued. “You get to the point where you have to have more people on the line to keep up. And workers are already really close together.”

Meanwhile, Governor Pete Ricketts of Nebraska announced that the state would not disclose the number of coronavirus cases in specific meat plants unless given permission by the companies. The state is only releasing aggregate case numbers across the meat processing industry.

One effect of the initial stoppages of meat production is the backlog of live animals destined for slaughter. According to the National Pork Producers Council, the plant stoppages and stressed plant capacities has caused a backlog of 170,000 hogs per day who would otherwise be transported to plants and slaughtered for the processing of their meat.

The NPPC also estimated that 10,069,000 pigs that will be unable to be slaughtered at the plants or otherwise not sellable will have to be slaughtered elsewhere and by other means. Reports have emerged of farmers and livestock workers personally shooting livestock en masse under conditions where significant sections of the US population face the growing threat of hunger.

Only the reorganization of basic industry, including food processing, on the basis of public ownership and workers control can lay the foundation for a plan to defeat coronavirus and ensure at the same time that public needs are met. This requires a political struggle for a socialist program in opposition to the Trump administration and its so-called Democratic Party opposition.