Officials from the Detroit Public Schools Community District (DPSCD) called a march and rally for “Equality and Justice for All” on June 11, which attracted 2,000 teachers, parents and students. While those who attended were sincerely motivated by opposition to police killings, racism and deteriorating public schools, district officials called the event to conceal the role of the Democratic Party in the decades-long assault on public education, which is now being escalated.

Like the marches in Detroit and other cities against the police murder of George Floyd the school district rally brought out educators and supporters of all races and ethnic groups. Marchers carried signs like “DPSCD Matters” and "G.E.O.R.G.E.: Give Everyone Opportunity, Respect, Government Equality," “Prioritize school funding: Books not bullets.” A white schoolteacher carried a sign listing the names of murdered black children and youth, including Emmett Till, Trayvon Martin and Aiyana Stanley-Jones, and asking, “Are my students next?” 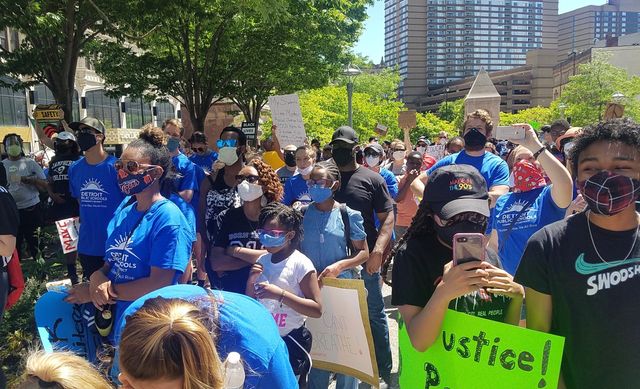 School officials are well aware that they will confront immense opposition from educators as they rush to reopen the schools in September amid the pandemic, slash jobs and services and divert even more money to school privatizers. The speakers at the rally, including District Superintendent Nikolai Vitti, blamed the chronic underfunding of the Detroit public schools on “systemic racism.”

In fact, the Detroit schools, like others around the state, have been systematically starved of funding by both the Democrats and Republicans. Meanwhile, both corporate controlled parties have handed over billions in tax cuts to the auto companies, Detroit Medical Center, DTE Energy, Comerica Bank and billionaires like Dan Gilbert and the Ilitch family.

Vitti, whose salary is $321,000, went out of his way to make it clear that the rally was not about “equality.” He told the crowd, “If we’re going to talk about Black Lives Matter in education, it’s got to be about not equality, it’s about equity. Our kids don’t need the same—our kids need more.” 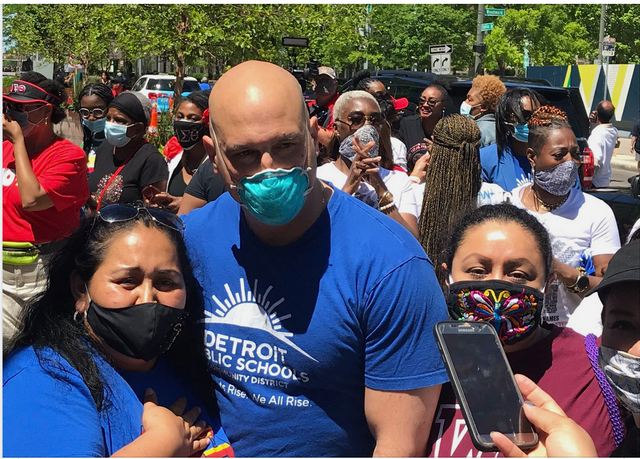 DPSCD Executive Board member Ridgeley Hudson suggested that the impoverishment of Detroit schools was result of the “white” suburbs. “We want the same education that students in Bloomfield [Hills] have…that students in Dearborn have...that students in Grosse Pointe have, and we won’t stop until we get it!"

In reality, budget cuts have hit every Michigan district, even Bloomfield Hills, which is predominantly middle class, with a median income of over $200,000. Dearborn, a largely working-class school district—with a median income of $44,560—receives $200 less than Detroit in per-pupil spending, according to a Michigan Department of Education report on the 2018-2019 school year published in February. Tellingly, Taylor, just downriver from Detroit, which has a racial makeup of 86 percent white and nine percent African American, receives $4,489 in per pupil funding, or almost 60 percent less than Detroit.

Singing off the same racially divisive song sheet, the day prior at a Philadelphia rally called by the Philadelphia Federation of Teachers, Democratic Party Councilwoman Kendra Brooks proclaimed, “We are worthy of the same building conditions like they have in Lower Merion and Doylestown,” referring to suburbs of Philadelphia. Echoing the same refrain was Philadelphia School District superintendent William E. Hite who has overseen successive waves of school closures and attacks on educators.

Misha Stallworth, a Detroit school board member, proclaimed, "If you know the history of this country, you know that our institutions of education have been one of the primary spaces that have perpetuated white supremacy and anti-black racism."

To paint the public schools as a battleground of seething racial warfare is a reactionary lie aimed at pitting white, black and immigrant teachers, parents and students against each other in a fratricidal struggle over dwindling resources. The mass teachers strikes since early 2018, beginning with the wildcat strikes in West Virginia, demonstrate that every section of educators, no matter what their color or ethnicity, are involved in a common struggle, not against “white supremacy,” but the supremacy of the banks and giant corporations that have looted public education, pensions and other essential social needs.

Historically, it was only the struggle to unify the working class, led by socialists in the 1930s, that enabled workers, including European immigrants and largely illiterate blacks and whites who migrated to Detroit from Appalachia and the Deep South, to win the right to public education for their children. Between 1900 and 1970, the percentage of high school graduates in the US rose from under 10 percent to 86 percent. Even with problems of persistent racial segregation, by the mid-1960s, the Detroit school system was considered one of the best in the nation and the earnings of its teachers set the standard for US educators.

The historic reversal of the public schools was not the product of a racial but a class war, overseen to a great extent by black mayors and city officials who were installed into power following the urban uprising in Detroit in 1967. Over the next half century, the automakers shut down hundreds of plants, eliminated hundreds of thousands of jobs and turned Detroit, which once had the highest per capita income in America, into the nation’s poorest big city.

During the 2013-14 bankruptcy restructuring of Detroit and the dismantling of the public school system in 2016, Barack Obama, the first African American president, used Detroit as “ground zero” for a pro-corporate “school reform” of funneling public assets into the for-profit charter school industry. The conditions for children in Detroit and around the country deteriorated under an African American president who defended Wall Street just as ruthlessly as his white counterparts.

Despite the efforts to promote identity politics, teachers are motivated by class issues. Many protesters connected the epidemic of police violence with decades of political reaction, lies, and social inequality.

Donna, a school social worker with 26 years in the district, said, "We have so many issues to deal with children here in Detroit. They are giving out computers for online learning but if I need something to eat, I'm going to pawn it to make ends meet. The school officials act like we can ignore poverty, 'You need to teach them,' they say. But how can children learn if they are hungry, if their water was turned off, if their clothing is torn and dirty, if their parents and grandparents are dying from COVID-19? 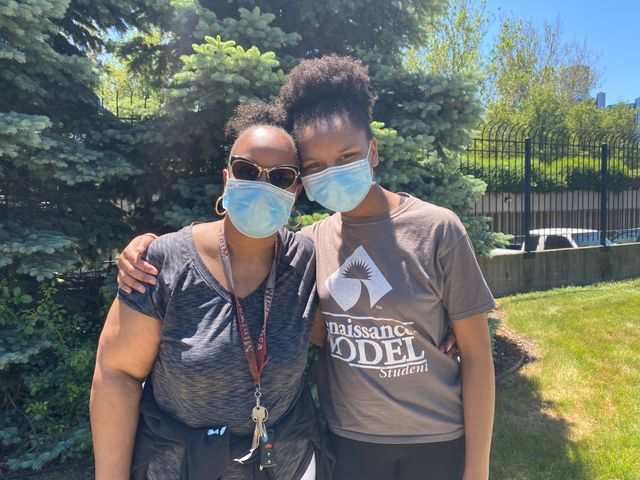 "Racism is real and I've witnessed it. But the class issues are never addressed. The powers-that-be don't care what color or gender you are, they just want to keep the money flowing into their bank accounts. To frame the issue solely as race, and for all the politicians and business leaders to say we're all coming together to address this, it's like putting a clean sheet over the top of a bed that's really nasty. They are covering up the fact that the entire institution is broken.”

The social worker continued, "They've cut Detroit schools for decades. Schools are short-staffed. There aren't enough social workers. They are getting rid of experienced staff who have expertise in dealing with the problems of children and parents and bringing in new grads in order to pay them less."

Sharon, a long-time high school social studies teacher in Detroit, told the WSWS, "The protests are about more than the killing of George Floyd. They are erupting all over the world. There has been class warfare waged against the working class for decades. I tell my students that when I graduated from Cody High School in the early 1980s, the schools were not dilapidated. We still had arts and music, and teachers' pay was still the best in the metro area.

"Education has been under attack by both parties and it has hit teachers and students of all races. Now they are trying to force teachers and other workers back to work while the pandemic is still raging, and they want to slash school funding and jobs while handing trillions to the rich.

"These are class, not racial issues," Sharon, who is African American, said. "The craziest thing that I ever heard is that blacks have had to fight alone. What about John Brown and the Abolitionists? What about the poor whites in the South who joined with black sharecroppers? What about the labor and civil rights movement? Now we are seeing the biggest multi-racial movement in history, and it is the working class internationally that is coming forward."

With the pandemic raging and unprecedented budget cuts looming, educators are now being thrust into an existential struggle in defense of public education. To take forward this fight they must reject the racialist politics of the Democrats and their pseudo-left supporters and build new organizations of struggle, independent of the pro-capitalist unions, to prepare a counter-offensive to defend public education. This will require a frontal assault on the entrenched wealth and power of the corporate elite, which have used the pandemic to enrich themselves even further.

With US states facing a $230 billion loss in education funding, Betsy DeVos channels public assets to private schools
[28 May 2020]

Perspectives for the coming revolution in America: Race, class and the fight for socialism
[2 December 2019]