The New York City Police Department (NYPD) abruptly announced the withdrawal this week of police officers who had been assigned to the offices of the district attorneys (DAs) in the main New York boroughs of Manhattan, Brooklyn, the Bronx and Queens. The action, in which the cops were transferred to “crowd control,” was in apparent retaliation for the decision by the DAs in these localities not to prosecute some non-violent protesters who had been arrested over the past several weeks in connection with the massive demonstrations following the brutal police murder of George Floyd in Minneapolis, Minnesota.

Although NYPD Commissioner Dermot Shea denied there was any connection between the police transfers and the prosecutors’ actions, the police had made no secret of their bitter opposition to the decisions by the DAs. There is little doubt that the move is the latest symptom of the tension and signs of revolt on the part of the police against local officials, including New York City mayor Bill de Blasio, a Democrat.

The DAs, all Democrats who face reelection next year, are attempting to appease the massive outpouring of outrage at police killings and violence with a few palliative measures and gestures. Even before the pandemic and the current protests against police violence, a number of them had announced they would no longer prosecute most cases of subway turnstile jumping or marijuana possession. The minor reforms are an attempt to placate growing opposition, not only to police brutality but also to social inequality and the increasing attacks on living standards. 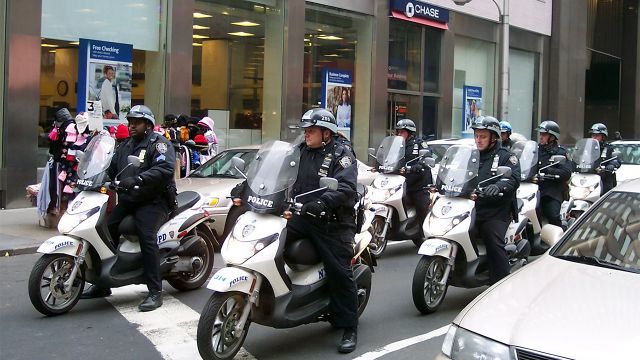 The cops are enraged by even the smallest concession to the working class, however. Ed Mullins, the president of the Sergeants Benevolent Association, called the decision not to prosecute protesters “a dereliction of duty to their oath of office. More important than undercutting the work of the NYPD, it is undercutting public safety.”

Mullins is already well-known for far more incendiary language directed against elected officials, especially the mayor. Just two weeks ago, in the midst of the mass protests against the murder of Floyd, and even though de Blasio had praised the cops, Mullins still accused the mayor of being anti-police. He released the private arrest record of the mayor’s daughter, who had been detained during a protest. Mullins accused de Blasio of “tying our hands … because your daughter’s out there.” Last February Mullins had said the police were “declaring war” on the mayor, after accusing de Blasio of responsibility when two cops were attacked.

An even more vivid expression of the current climate of tension and suspicion involving the police was a strange incident at a Shake Shack restaurant in lower Manhattan on Monday evening.

As reported in the New York Times and elsewhere, three cops stopped for milkshakes, which had a bitter taste and left them feeling ill. Within about an hour, the Detectives Endowment Association had announced on social media, “Tonight, three of our fellow officers were intentionally poisoned by one or more workers at the Shake Shack. Fortunately, they were not seriously harmed.” This was retweeted by the main police union in the city, the Patrolmen’s Benevolent Association, which added, “When NYC police officers cannot even take meal without coming under attack, it is clear that environment under which we work has deteriorated to a critical level.”

Video footage showed no tampering with the drinks, however. Apparently, some equipment at the restaurant had not been thoroughly cleaned. The NYPD chief of detectives announced at 4 a.m. the next morning that there had been “no criminality” by the Shake Shack workers. The police unions quietly deleted their social media posts. The incident testified to the siege mentality among the police, and their view of the working class, and working class youth in particular, as the enemy.

The latest tensions unfolded while de Blasio and the state’s Democratic governor, Andrew Cuomo, were unveiling more cosmetic “reforms” designed to placate the multi-racial and multi-ethnic protesters who have responded to the Floyd murder with far greater determination and in far greater numbers than at any time in recent decades.

The mayor said that the NYPD will be required to release within 30 days all audio and video footage of incidents where officers use force. And Cuomo signed legislation that he piously proclaimed would “increase transparency in policing, promote accountability among our law enforcement agencies and ultimately mend that frayed relationship between the police and the community.”

In addition to legislation banning the use of police chokeholds and mandating that New York State police wear body cameras, the governor also signed a bill that established the Law Enforcement Misconduct Investigative Office within the state’s Department of Law. This new layer of bureaucracy will supposedly handle misconduct complaints statewide about local law enforcement agencies.

To say the latest measures from de Blasio and Cuomo are “too little, too late,” would be a huge understatement. The mayor has earned the hatred of many who voted for him when he first ran for office in 2013. His platform included a denunciation of the notorious “stop-and-frisk” policy, which had led to the harassment and arrests of huge numbers in working class neighborhoods, especially black and other minority youth. “Stop-and-frisk” was ended by a court decision, but de Blasio has presided over steadily rising inequality, and a social crisis that has now produced scenes of police attacks on peaceful protesters. Cuomo has alternated between full-throated support for the police and mealy-mouthed platitudes about “mending the frayed relationship.”

The mayor and the governor, despite their long record of public sniping at each other, have absolutely no fundamental differences, as shown by their behavior of the past few weeks. They seek to strangle the current movement with some toothless reforms. They are especially afraid of a more massive eruption within the working class, as the fight against police abuse merges with anger over the ongoing economic collapse, the criminal negligence with regard to the COVID-19 pandemic and the homicidal policy of reopening without effective treatment or proper safety protection for workers who are being forced back to their jobs.

The brutality displayed by the police in the murder of Floyd and against protesters in Minneapolis and elsewhere is part of the escalating attacks on the working class, and it has thoroughly exposed the Democrats as one of the two major parties of the ruling class. They pose as allies of the protests, while presenting the issue of police violence in solely racial terms to disguise the fact that they stand with the police.

Even those who habitually back the police are unable to openly defend Derek Chauvin’s murderous sadism, captured on video in Minneapolis. Chauvin and his accomplices are far from isolated bad apples. This has been demonstrated in Buffalo, Seattle, Atlanta and cities up and down the country, egged on by the Trump White House. The New York Times documented at least 99 US cities, from Philadelphia to Milwaukee to San Diego and Orlando, where tear gas was used to intimidate and disperse peaceful protests. New York and a few other large urban centers have so far been spared as far as tear gas, undoubtedly for fear of unleashing even greater anger.

Even without deploying tear gas the NYPD still rampaged against protesters. THE CITY website reported this week that 18 notices of claim, the first step in filing a suit against New York, have so far been submitted alleging police brutality at recent protests, and that dozens of other claims are expected within days.

Throughout the US cops and their unions are increasingly rebelling against any perceived infringement on their prerogative to carry out arrests and bludgeon demonstrators. Fifty-seven members of a Buffalo, New York police riot response team resigned from the special unit en masse two weeks ago after two cops were suspended after they shoved 75-year-old Martin Gugino to the ground. The elderly protester suffered a fractured skull and remains hospitalized.

The real dangers facing the working class are expressed in the actions of the police, no matter the honeyed phrases of the Democratic politicians. The police, the “bodies of armed men” whose task is that of defending capitalist property relations and enforcing a brutal regime of exploitation, are recruited from among the most politically backward layers of the population, and trained as the attack dogs of the ruling class. The ruling class is encouraging the development of fascistic elements within the police and other law enforcement agencies as the capitalist crisis deepens and the class struggle erupts.

Bourgeois politicians such as de Blasio and Cuomo may criticize and endlessly promise changes, but it is they who are ultimately responsible. The system they represent has no substitute for these guardians of law and order, and the current outbursts are the sharpest warning of the struggles that lie ahead.