German automaker Daimler’s works council does not represent the interests of the workers, but rather the shareholders and company bosses, as is shown by the solicitude it expresses for their needs. There is no other explanation for the circular letter addressed to the company’s 300,000 employees from Central Works Council Chairman Michael Brecht and his deputy, Irgun Lümali calling for an intensification of attacks on workers.

Due to declining sales and a reduction in profits, the works council warned about a drop in share prices and raised concerns over whether dividends would be paid out. Therefore, a further reduction of the workforce and cuts to workers’ benefits were unavoidable, the pair wrote. The already planned 15,000 job cuts are inadequate, the letter continued, and will need to be dramatically increased. The two works council leaders wrote that talks on this have begun “between the works council and company management.”

“We currently find ourselves in an unprecedented situation,” stated the letter. Along with the global pandemic, which has sickened millions and caused many deaths, “we are in a global economic crisis.” It is unclear how long these conditions will last. “That means that the coronavirus remains the number one risk to jobs,” the letter noted. 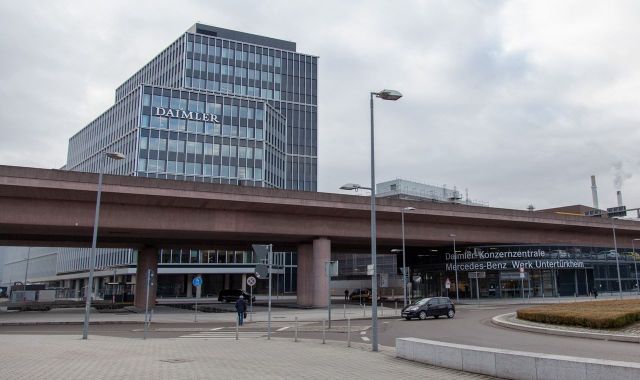 The works council is repeating word for word the arguments of company management and industry analysts. At the beginning of the year, the auto sector was expecting to sell 90 million cars and light utility vehicles around the world in 2020. Now, at the conclusion of the first six months of the year, most automakers and suppliers estimate total sales of 70 million by year’s end.

The corporate consultancy firm Alex Partners anticipates ruthless competition among automakers with the aim of driving rivals out of business. “Only automakers and suppliers with financial and innovative strength will survive the upcoming market cleansing,” they wrote. As a whole, the auto sector “will certainly not turn a profit this year,” Elmar Kades, the head of Alex Partners’ auto division, told financial daily Handelsblatt. In Europe, sales are only likely to return to pre-crisis levels in five years.

Financial consultants Ernst & Young reported that the profits of the world’s 17 largest automakers collapsed by 58 percent during the first three months of the year to a combined $7.5 billion, the lowest level since 2009. “Revenue declined by 9 percent, and new car sales by an even greater 21 percent.”

Constantin M. Gall, head of the automotive transport division at Ernst & Young, expects that the worst is still to come, saying, “We only saw the initial impact of the global COVID-19 pandemic during the first quarter. The second quarter will turn out to be far worse. The auto sector globally will then slide deep into the red.”

Managers everywhere have obligations to shareholders. Daimler CEO Ola Källenius has declared the internal slogan to be, “Margins take priority.” This means that the workers must bear the cost of retaining profit rates. Several weeks ago, he declared, “We have to take action.”

Daimler’s works councillors have spearheaded this approach. In addition to the collapse in sales triggered by the coronavirus, the sector also confronts the transition to electric vehicles and self-driving cars. Brecht and Lümali stress, “We must press ahead speedily with the transformational process we are presently involved in. To do that, we require multi-billion investments. This money must be earned, in spite of the crisis.”

Since the money cannot be generated due to declining demand, it is to be raised through cost-cutting. “No sales, no revenue,” wrote the two works council heads. Just how hard the “coronavirus shock” has hit the auto industry economically “will be glaringly displayed by the second quarter earnings—and not just at Daimler.” The economic challenges will thus grow, “making the transformation of our sector an even more demanding accomplishment.”

This transformation must be directed “from the top.” The pair consider themselves to be at the top. This is why the central works council is already talking to management about further job cuts.

The job cuts agreed thus far were to take place indirectly and in administration. But the works council has now turned its focus to production workers. Brecht and Lümali step up the pressure, writing, “Depending on the demand for our products, it cannot be excluded that the personnel measures will be extended, depending on the plant and job type, into the production divisions.”

The pressure is high and will continue to rise, they added. “The economic situation will also get worse,” they said. Even when the number of workers receiving short-time work benefits declines, “management intends to alter fixed costs and procedures.” This is why management wants to restructure.

Källenius has already announced that models failing to generate sales will not be built, and that the number of engines being built will be reduced. Daimler’s Scandinavian CEO believes that the COVID-19 pandemic has merely “exposed the Achilles heel of the auto industry,” according to Handelsblatt. Long development cycles and expensive fixed costs have made the sector vulnerable.

Brecht and Lümali admit that they are negotiating over three “projects.” Firstly, Daimler plans to manage its IT infrastructure under the slogan “twice as fast” with a significantly reduced workforce. Key servicing tasks are to be outsourced by the middle of next year. “A total of 2,000 workers worldwide, including close to 900 in Germany, will transition to these external firms through a company transfer agreement,” write Brecht and Lümali.

Secondly, the automaker plans to restructure its internal organization, which was only established last year, through the creation of three independent divisions: auto, trucks, and mobility services. Daimler AG, with its 6,000 employees, will be reduced in size as a holding company. “Consideration is currently being given to transferring administrative and central responsibilities into the three company divisions,” wrote the works councillors in their letter to the employees.

Thirdly, Daimler is also reviewing whether administrative tasks in the human resources and financial departments can be merged. “In addition, consideration is also being given to transitioning parts of the business into limited liability company structures. The result would be further job cuts or company transfers,” write the works councillors.

Handelsblatt also notes that among the leadership cadre, “discussions have long since begun on capacity cuts. Over the medium term, we must reduce our capacity by 10 to 20 percent in order to utilise the plants at their capacity. Only China is excluded from this,” wrote the financial daily, citing a manager. “It is ‘inherently important’ to extend the savings goals, added another leadership member.”

In other words, Daimler’s leadership is discussing the destruction of tens of thousands of jobs.

The letter from the two works councillors underscores once again that Daimler workers not only confront company management, but also the works council and IG Metall trade union. The two works council commanders stand at the head of an army of IG Metall officials, who ensure peace and stability in the plants, and the seamless imposition of attacks on the workforce.

For this, they are paid, or perhaps more accurately “bribed,” with fat salaries: Michael Brecht, in his capacity as deputy chair of Daimler’s supervisory board, earned half a million euros in 2019. Irgun Lümali, his deputy, earned €280,000 last year for his seat on the supervisory board. These are only two of the thousands of IG Metall officials who are bound to company management and shareholders with millions of euros in salary payments.

This is why they consider it out of the question to use the billions of euros being hoarded by the corporations for the workers rather than the shareholders. According to Ernst & Young, the automakers are sitting on a huge hoard of cash. “At the end of the first quarter, the 17 largest automakers had €207 billion of liquidity at their disposal, 13 percent more than three months earlier,” they wrote in their press release.

To defend jobs, autoworkers must break with the trade unions and their bought-and-paid-for works councillors, form independent action committees, unite their struggles internationally, and fight for a socialist programme. It is necessary to transform the entire auto industry, including producers and suppliers, into democratically-controlled public utilities in order to redirect the billions currently flowing to the shareholders into the guaranteeing of jobs and decent living standards.