Australia’s largest supermarket chain Woolworths announced late last month that it will slash 1,350 jobs as it automates and relocates its warehouse operations in Sydney and Melbourne.

A new pair of automated distribution centres will be constructed at Moorebank in Sydney meaning the closure of existing facilities in Minchinbury and Yennora in Sydney and Mulgrave in Melbourne. Workers have been told that many of them will be made redundant when the new centres become operational in 2025.

None of the 1,300 employees have been guaranteed redeployment at the Moorebank facilities. They will require just 650 workers and will be fitted out with $700–$780 million of technology and robotics designed to automate much of the warehousing processes. Woolworths has indicated it has set aside $176 million to cover redundancies. 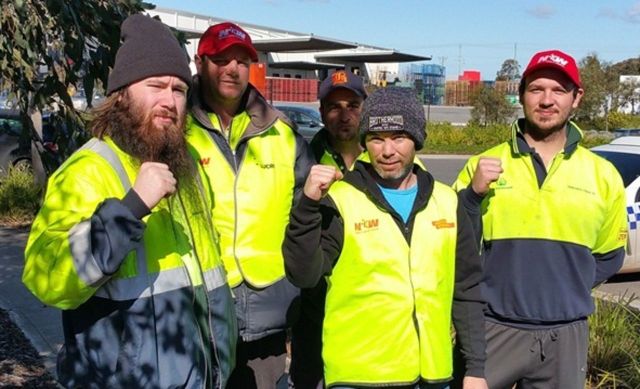 Woolworths warehouse workers from Melbourne in 2015

While workers face a future of uncertainty, the retail giant said it expected full year earnings before interest and tax to be in the range of $3.2 billion to $3.25 billion, down from $3.9 billion last year.

Like other major corporations, Woolworths is using the pandemic and the resulting economic downturn to accelerate a pro-business restructuring involving the elimination of jobs and the slashing of working conditions.

Last year, before the COVID-19 crisis, Woolworths had already announced the closure of 30 Big W stores, many in regional cities. Associated distribution centres were also shuttered, resulting in the destruction of 1,000 positions.

The United Workers Union (UWU), which covers the Sydney warehouses, has not organised any political action or campaign to protect workers’ jobs.

A UWU representative official labelled the latest cuts as “particularly heartless given the back-breaking work our members did to support Woolworths through COVID and make them massive profits.”

The union, however, has pledged to provide unspecified assistance to help workers move “on to other sectors,” signalling that it will enforce the sackings.

Woolworths generates its enormous profits on the back of its highly exploited casual employees, who make up almost half the workforce. This is a result of decades of union-brokered Enterprise Agreements (EAs) that have suppressed wages and cut conditions.

Successive EAs struck with the Shop, Distributive and Allied Employees Association (SDA), and other unions in the supermarket sector, have imposed pay rates below minimum award levels. As a result, up to 250,000 workers, many of them casual, have been underpaid billions of dollars in the supermarket, retail and fast food sectors over the last several years.

The company’s ruthless drive for profits, facilitated by the unions, has recently been showcased in one of the largest instances of underpayment to workers in Australia.

The company claimed to have “discovered” that it had underpaid 5,700 staff by as much as $300 million, during the implementation of a previous enterprise agreement. Significantly, the admission only came after revelations that a number of major Australian retailers had been underpaying staff. Woolworths went to the ombudsman in an effort to prevent a more detailed scrutiny of its practices.

On the same day Woolworths announced the current round of job cuts, it admitted to a blowout of at least $90 million in the cost of its back-pay for workers in its hotel division who had been underpaid in 2018 and 2019. This brought the company’s total liabilities to $390 million. Last month’s revelation was the second time this figure was revised up.

The UWU and the SDA, along with the union bureaucracy as a whole, is doing everything it can to prevent opposition emerging from workers.

The unions have backed federal and state government handouts to employers over the past months, worth as much as $250 billion, along with loans to shore up banks and large businesses.

Woolworths responded to the current crisis by rapidly standing down thousands of workers across its hospitality division. The latest job cuts are further proof that the government stepped in to protect the profits of major corporations, while facilitating a further offensive against jobs, wages and conditions.

The unions are playing the central role in this onslaught.

The Australian Council of Trade Unions (ACTU) will collaborate in talks with Woolworths, which has publicly called for cuts to after-hours penalty pay rates, on the fraudulent pretext that this will “create jobs.”

This is part of a broader integration of the unions into company and government frameworks. In May, the ACTU announced that it would join tripartite talks with big business and the government to plan a vast pro-business overhaul of industrial relations and workplace conditions.

ACTU chief Sally McManus has been hailed by Industrial Relations Minister Christian Porter as his “BFF” (best friend forever) for approving the cutting of overtime pay and shift restrictions for millions of fast food, hospitality and clerical workers since the pandemic began.

Logistics workers at Woolworths and elsewhere must draw the necessary conclusions. The unions are thoroughly corporatised entities that function as an industrial police force of governments and big business.

What is required is the building of independent organisations of struggle, including rank-and-file committees, to organise a genuine industrial and political fight in defence of all jobs at Woolworths and across the board.

Such committees face important political issues. Under capitalism, the automation of the logistics and manufacturing process serves to further concentrate wealth in the hands of a tiny few, while workers are thrown into poverty or are forced to settle for lower paid insecure jobs. Monopolistic corporations, such as Woolworths are further entrenched, expanding their market share.

Automation, however, has the potential to free workers from labourious and dangerous tasks. The resulting increase in productivity could be used to shorten the working week with no loss in pay and to ensure the provision of decent food and supplies to all.

This, however, requires the reorganisation of society to meet human need, not private profit. That means the fight for a workers’ government that would implement socialist policies, including placing the corporations and the banks under public ownership and democratic workers’ control.