A fire that broke out on Saturday morning severely damaged the historic Gothic St. Peter and St. Paul Cathedral in Nantes, in western France.

Fire authorities arrived at the cathedral just before 8 a.m. after receiving calls from passers-by reporting smoke and flames coming from the building. They discovered a “violent fire at the level of the organ behind the rose window, and their intervention was focused on this area,” according to the fire department chief Laurent Ferlay. More than 100 firefighters intervened and were able to put out the blaze by 10 a.m.

While the overall structure of the building so far appears to have been saved, the greatest losses were to the organ and the stained glass windows behind it, which were completely destroyed. The grand baroque organ had been built in 1620 and restored five times over the last 400 years. Mathieu Lours, an architectural historian specializing in cathedral architecture, told France Info, “It is a great drama because this is one of the most beautiful organs in France that has just gone up in smoke.” 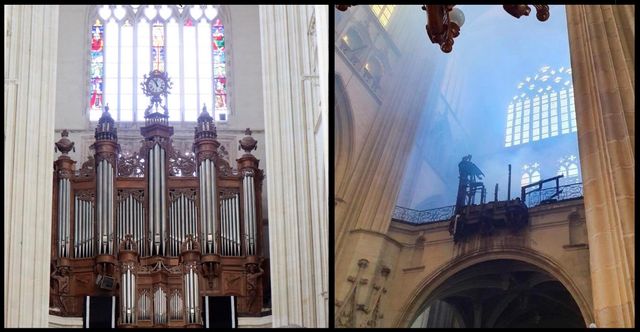 Michel Bourcier, one of the titular holders of the organ, told France Info that the organ “had survived the bombings of the Second World War [during an Allied bombardment of Nazi-occupied France], a fire in 1972, and then, within a few hours, went up in flames. … It was the most important organ from the region and so this is a heritage loss,” and a “severe blow to culture.”

The stained glass windows had been installed in the 19th century but also contained remnants of 16th-century glass. Other items lost included a 19th-century painting by Hippolyte Flandrin.

The organ had reportedly been threatened with destruction in the course of the 1789 French Revolution, as were many other Church artifacts. A leading organist of the time, Denis Joubert, had allegedly convinced the revolutionary committee to instead use the organ for the playing of the Marseillaise and other tributes to the revolution.

The cause of the fire remains unclear. The public prosecutor for Nantes, Pierres Sennès, announced on Saturday that an investigation had been opened for “voluntary arson.” He stated that “three distinct starting points of the fire” had been found, “separated from one another by a substantial difference.”

Two were found at the ground floor, on the left and right side of the building, and a third 30 meters above ground level, at the height of the grand organ. He added that investigators “had not found in the external entrances a sign of a break-in.”

On Sunday morning, Sennès announced that a volunteer at the cathedral had been arrested and placed in police custody as part of the investigation. However, on Sunday evening, Sennès confirmed that he had been released “without charge.” The rector of the cathedral, Hubert Champenois, stated that the volunteer was a 39-year-old Rwandan refugee who arrived in France several years ago.

The refugee had been “responsible for closing up the cathedral on Friday evening and investigators wanted to obtain precise information about the timetable of this person.” Diocese administrator François Renaud stated that “several dozen volunteers” work at the cathedral, but that at night, “the inspection is done by an employee of the cathedral.”

The fire in Nantes takes place almost exactly 21 months after the devastating April 15, 2019 fire at Notre-Dame cathedral in Paris. Most of the priceless monument’s upper walls were severely damaged, its roof was destroyed and its spire collapsed.

The Notre-Dame fire highlighted the catastrophic impact of the French ruling class’ austerity policies and the starving of funds for maintenance and protection of the cultural jewels of humanity.

The fire system at the cathedral was highly complex and required considerable training to be able to read its warning signals and determine the location of a fire. When the blaze occurred, the lone employee on site was unable to determine the fire location and incorrectly concluded that it was a false alarm. The employee had been there three consecutive days and was beginning a second straight shift because his replacement did not arrive.

Moreover, according to Le Canard Enchainé, the security system had previously been manned by two people, which would allow one to keep an eye on the detectors while the other made a time-consuming trip to the potential source of the fires. The second security position had been removed due to funding cuts.

The burning of Notre-Dame cathedral in Paris
[17 April 2019]

Cultural resources wiped out by COVID-19 crisis: 13 percent of museums worldwide may never reopen
[27 May 2020]

The burning down of Brazil’s national museum: A capitalist crime against the heritage of humanity
[4 September 2018]