Priya Murugappan, the mother of a Sri Lankan Tamil refugee family imprisoned on Australian-controlled Christmas Island in the Indian Ocean, was denied proper medical treatment for more than a month, according to the family’s lawyers and friends.

After suffering more than two weeks of severe abdominal pain, Priya was finally transported nearly 2,700 kilometres from Christmas Island to Perth, Western Australia, on July 19. Even then, Priya’s family—her husband Nades, a meatworker, and two daughters Kopika, 4, and Tharunicaa, 3—were not allowed to leave with her. 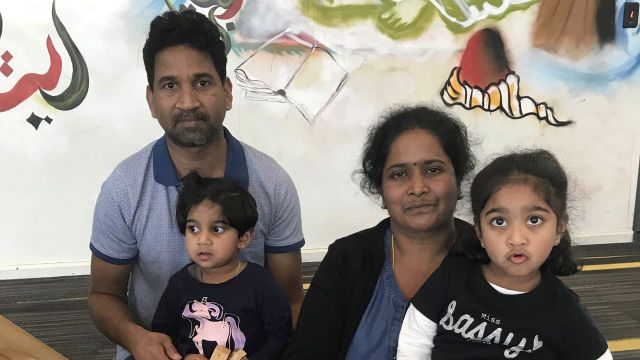 Priya Murugappan with her family

Despite widespread support for the working-class family in the central Queensland rural town of Biloela, where they were seized from their home before dawn more than two years ago, Prime Minister Scott Morrison’s government has continued to detain, vilify and try to deport them.

The Liberal-National government’s denial of urgent medical care to Priya is another indictment of the reactionary anti-refugee policy it has vehemently enforced, like the previous Labor government before it. Successive governments have deployed the military to repel refugee boats and detained all asylum seekers on remote islands.

Carina Ford, the family’s lawyers, told Special Broadcasting Service (SBS) News that Priya had been in pain since mid-June and urgently required a CT scan, which the hospital on tiny Christmas Island could not provide.

“There was a discussion as early as that [mid-June] as to whether this scan was needed,” Ford told SBS, but that “a decision was made by the department not to do it early and she has got increasingly unwell.”

Priya told SBS the symptoms reached the point of constant vomiting and unrelenting pain. “In recent days, I was even vomiting via my nose as well,” she said Priya. Doctors on Christmas Island hospital demanded that the International Health and Medical Services (IHMS), a private company that overseas medical treatment of detainees, give Priya the proper treatment.

“It is because of the doctors at Christmas Island hospital fighting with the IHMS doctors that ensured I got this treatment urgently.” Priya said. “Every time I got unwell, the IHMS doctors never tried to identify what was wrong with me, they just gave me Panadol and painkillers.”

Priya said the government’s Australian Border Force was now preventing her from even making video calls to her daughters. Her family was denied access to Wi-Fi, so she could only make phone calls. “If Border Force gave permission, then I should be able to speak to my daughters on a video call and at least I could look at my children’s faces and see them while I talk to them.”

Angela Fredericks, a family friend and a leader of the campaign waged by the people of Biloela for the family’s freedom, told the media a doctor insisted on Priya being flown to the Australian mainland.

“What it boiled down to was an amazing doctor on Christmas Island who actually refused to discharge her back to the detention centre,” Fredericks said. The doctor made this decision after seeing her four times and “was not satisfied with the care she was getting and insisted she had to get to the mainland.”

Fredericks describe the emotional toll on Priya. “She’s now on the mainland all by herself with just SERCO guards for company… little Tharunicaa, the three-year-old, is incredibly distressed being separated from her mum, not understanding what’s happening.”

Last Thursday, the government’s direct backing for this cruelty was exposed. Home Affairs Minister Peter Dutton personally denounced the family on 2GB radio. He bemoaned the fact that the federal government provided the charter flight to Perth for Priya and claimed her tests revealed no medical issues.

Blaming Priya and Nades for the appalling conditions the family faces, Dutton said: “This is a situation of their own making, it is ridiculous, it’s unfair on their children, and it sends a very bad message to other people who think they can rort the system as well.”

Dutton accused the family of “playing funny games” through the courts, saying “they are not refugees and they have used every trick in the book to make sure they can stay.” This is an open attack on the basic legal rights of asylum seekers to challenge the government’s decisions to deny them refugee status.

Dutton’s attack also directly prejudices the family’s current court case. A Federal Court judge ruled in April their deportation must remain on hold because Tharunicaa, the youngest daughter, was denied procedural fairness in her application for a protection visa.

Dutton’s tirade against the family turns reality on its head. In truth, the government has tried to use “every trick in the book” to deny the family the right to asylum and force them back to Sri Lanka.

Priya and her family have been imprisoned on Christmas Island since last August, after a last-minute court injunction halted their immediate deportation to Sri Lanka. Priya and Nades arrived in Australia at different times, in 2013 and 2012 respectively, fleeing persecution by the Sri Lankan government.

Biloela residents have waged a sustained campaign in defence of the family, generating national and international support. More than 200,000 people have signed a petition demanding that they be allowed to remain in Australia, and many thousands have attended protests across the country.

This popular response has refuted the incessant claims of the major parties, and the corporate press, that the bipartisan assault on asylum-seekers is supported by ordinary people. Significantly Nades’ fellow workers at the Biloela meat plant and other immigrant workers in the town are among the family’s strongest supporters.

In 2012, the last Labor government barred all asylum-seekers who had previously arrived by boat from even applying for refugee visas. This placed them in a legal limbo, still permitted to live and work in the community, but always with the threat of deportation hanging over their heads.

In July 2017, the current National-Liberal government moved to deport, en masse, the approximately 7,500 asylum seekers stuck in this position. Dutton, then immigration and border protection minister, labelled them all “fake refugees.”

As a result of this poisonous atmosphere, the family had their applications rejected and, in a pre-dawn raid in March 2018, they were arrested and detained. Their treatment is particularly inhumane and politically vindictive. They have been ripped away from their home and their main source of support in Biloela. Christmas Island is nearly 5,000 kilometres from their home town and there are no other asylum-seekers presently detained there, isolating them from human contact.

This punitive treatment is part of the international assault on refugees worldwide. In Europe, tens of thousands languish in prison camps facing barbed wire and truncheons. In the US, COVID-19 deaths are continuing among the more than 23,000 immigration detainees. Workers internationally must come to the defence of refugees as part of the fight against the capitalist profit system and its division of the world into competing nation-states.

Stop the deportation of the Biloela refugee family from Australia!
[4 September 2019]