Australian government signs up to US offensive against China

Despite evident nervousness about the possibility of economic retaliation from Beijing, Australia’s government this week scrambled to satisfy the demands of the Trump administration to fully commit to the escalating US military, diplomatic and economic confrontation with China.

The joint July 28 statement issued by the US and Australian foreign policy and military leaders from the Australia-US Ministerial Consultations (AUSMIN) in Washington DC read like a justification for war.

It broadcast all the Trump administration’s incendiary and unproven allegations against China—from “coercive and destabilizing actions across the Indo-Pacific” to “malicious interference” in other countries—and announced a classified military “Statement of Principles” to “advance force-posture cooperation” against China.

After the post-AUSMIN media conference, US Secretary of State Mike Pompeo again lashed out at China, vowing to back and defend Australia from “intense continued coercive pressure from the Chinese Communist Party to bow to Beijing’s wishes.”

Without offering the slightest justification for his accusations, Pompeo declared: “It is unacceptable for Beijing to use exports or student fees as a cudgel against Australia. We stand with our Australian friends.”

Like previous AUSMIN communiqués, the joint statement itself commenced by framing the relationship in terms of fighting wars together. It declared that the US-Australian alliance “remains unbreakable” more than a century “since we first fought side-by-side” in World War I. 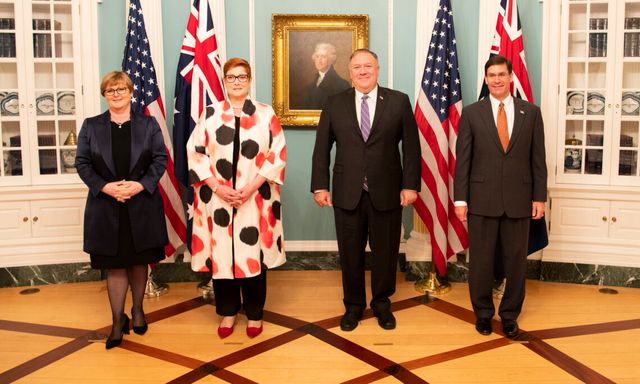 Reynolds and Payne with Pompeo (Credit: US Embassy in Canberra)

The significance of these declarations was underscored by the fact that the Australian foreign affairs and defence ministers, Marise Payne and Linda Reynolds, travelled to Washington with an entourage that included their department heads and the Australian military chief, General Angus Campbell, despite the COVID-19 pandemic ravaging the US population.

They met face-to-face with Pompeo and US Defense Secretary Mark Esper, who thanked them ostentatiously for making the trip. “And your entire delegation will be quarantining when you get back,” Pompeo said. “Not many partners will do that for us, and so thank you to each of you and your teams for being with us here in person.”

No explanation was provided as to the top-secret classification of the “force-posture cooperation” agreement, entitled “Statement of Principles on Alliance Defense Cooperation and Force Posture Priorities in the Indo-Pacific.” The AUSMIN joint statement referred only to the establishment of a “bilateral Force Posture Working Group” seeking to “deter coercive acts and the use of force.”

Nevertheless, this pact is another indication of war preparations. The four leaders also announced the construction of a US-funded, commercially-operated strategic military fuel reserve in the strategic northern Australian city of Darwin. US marines already have been stationed, on rotation, in Darwin since the previous Greens-backed Labor government of Julia Gillard agreed to that in 2011.

The AUSMIN meeting unveiled several other joint operations, including a high-level working group to “vigorously” monitor and respond to “harmful disinformation”—clearly directed against China. No information was offered about the alleged kinds of “disinformation,” or how such activities would be attacked.

At the joint media conference, the four refused to specifically answer questions from reporters about further details of what had been agreed, such as whether Australia had acceded to the mounting US requests for its warships to join provocative “freedom of navigation operations” within the 12-mile territorial waters surrounding Chinese-occupied islets in the South China Sea.

Esper, however, praised Australia for already joining US naval operations in the region. “Last week, five Australian warships joined the USS Ronald Reagan carrier strike group and a Japanese destroyer in conducting a trilateral naval exercise in the Philippine Sea ahead of the upcoming RIMPAC exercise in Hawaii,” he said. “These exercises not only bolster interoperability, but also send a clear signal to Beijing that we will fly, we will sail, and we will operate wherever international law allows and defend the rights of our allies and partners to do the same.”

Likewise, Esper did not directly answer a question about whether the US was continuing to explore the idea of deploying mid-range missiles in Australia, directed against China, but indicated that this was certainly being discussed. “We had a very ranging discussion about the capabilities the US possesses and the capabilities Australia possesses and our desire to advance them—whether they are hypersonic or any other kind of capability,” he said.

These activities are just part of the gearing up for hi-tech warfare against a nuclear-armed country. Reynolds spoke about joint development of “hypersonics, electronic warfare and space-based capabilities,” to “ensure the alliance maintains its capability edge in a rapidly modernising environment,” without giving any details.

The assertion by the US and Australia that China is the source of the tensions and “malign behaviour” in the Indo-Pacific stands reality on its head. The Trump administration is increasingly resorting to anti-Chinese propaganda to blame a foreign “enemy” for the COVID-19 catastrophe in the US, while vying with the presumptive Democratic presidential candidate, former Vice President Joe Biden, to be the most strident in doing so.

At the same time, the White House is ramping up the US “pivot” or “rebalance” to Asia, which President Barack Obama formally initiated in the Australian parliament in 2011. It consists of continuous diplomatic, economic and military efforts to undermine Chinese influence and reassert American dominance over the region.

In the South China Sea, which is strategically vital to China, Washington has seized upon Beijing’s longstanding bilateral territorial disputes with other countries, the Philippines and Vietnam in particular, potentially creating the pretext for US-led military interventions to supposedly defend them against “Chinese bullying.”

US Public Broadcasting Service (PBS) journalist Nick Schifrin asked Payne to comment on Pompeo’s regime-change call in his speech last week in which he urged all “free nations” to rise as one against Chinese “tyranny,” regardless of the economic consequences. Schifrin asked Payne whether “the admonition to help the Chinese people change the Chinese government” was “possible and/or wise?”

Payne obfuscated, saying US policy was for itself to determine, while insisting that the Australian government had an “important” relationship with China, which Canberra had “no intention of injuring.”

The billion-dollar interests behind that nervousness, especially based on mining exports to China, received expression yesterday when a business-backed group, China Matters, warned that Australia could be “collateral damage” if US-China ties deteriorated further.

Regardless of these fears, however, the dominant sections of the Australian ruling class have concluded that they have no option but to back the US, on which they depend heavily for investment, as well as military and intelligence support.

While Payne claimed that the US-Australia relationship was “respectful,” she and Reynolds were at pains to recite the actions that the Australian government had taken in sync with the US. The list included banning the Chinese telecommunications giant Huawei from Australia’s proposed 5G network, opposing China’s Belt and Road infrastructure program, introducing “foreign interference” laws, blocking Chinese investment in certain industries, and denouncing Chinese actions in Hong Kong and Xinjiang.

It also included declaring “illegal” China’s territorial claims in the South China Sea, collaborating on the mining and refining of “critical minerals” and allocating an extra $270 billion over the next decade to boosting Australia’s military capacity, especially for longer-range operations in China’s vicinity.

On every front, each Australian government over the past decade has increasingly integrated the country, militarily and strategically, into the drive by the US to block China from challenging the US domination of the region and the world, effectively placing the Australian population on the frontline of a potentially catastrophic war.

The anti-China campaign in Australia