“A nationwide strike is what needs to be done”

Protests continue daily across the US as teachers, school workers and parents rally against the bipartisan demand for a return to classrooms, as coronavirus cases hit five million and deaths top 162,000. The Socialist Equality Party’s statement calling for a nationwide general strike and elaborating a political perspective to mobilize the working class against the homicidal return to work and school is being widely discussed and shared across dozens of Facebook groups and other social media. Educators and workers everywhere will not, and cannot, accept this implicit death sentence.

As schools reopen, COVID-19 spreads immediately. Schools in Corinth, Mississippi, opened last week, but had one case by Friday. As of yesterday, 116 students have been sent home to quarantine. Corinth held daily temperature and symptoms checks, as per the CDC guidelines, yet could not prevent wide exposure. Similar spread has been recorded as schools opened in Gwinnett, Georgia, southwest Kansas, and Greenfield, Indiana. 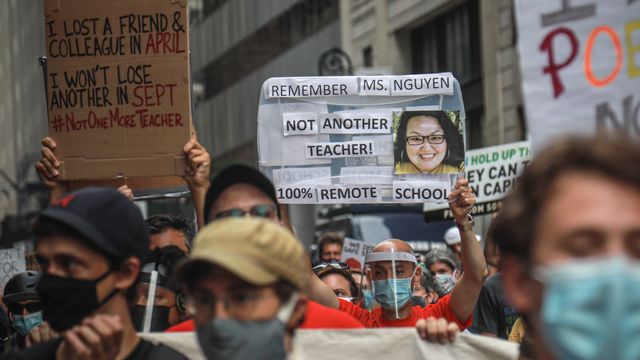 The depth and breadth of opposition to Wall Street’s lethal edict to return to work and school, however, has mostly been ignored by the national mainstream media. It briefly covered a few of the union-backed National Day of Resistance rallies but has deliberately downplayed the growing social opposition. The latest polling numbers show only 16 percent of parents support Donald Trump’s demand for five-day-a-week face-to-face instruction, with 56 percent saying it would not be safe to send children back to school in their communities for in-person learning.

This article can only give a snapshot of some current developments in this developing movement. Not mentioned below are many other rallies this week, including in central Ohio; south Salt Lake City, Utah; Long Beach and Stockton, California; Columbia, Missouri; and Orland Park, Illinois.

On Thursday, hundreds of teachers, staff, parents, and students protested at a meeting of the Jefferson Parish School Board (Metairie), representing the largest school district in Louisiana with some 50,000 students. One teacher, David Fields, had his hands painted red to symbolize the lives that would be lost due to the reckless reopening. He carried a sign drawn like a bullseye, which read, “Dead custodians. Dead students. Dead Principals. Dead Teacher Aides. Dead Parents. Dead Bus Drivers.” Written in the center was “Blood on your hands,” indicting the school board.

The meeting, ostensibly to gather public testimony, was abruptly shut down in the face of public anger. The board had confirmed that a “handful” of employees in the district tested positive for COVID-19 after teachers and staff returned to campuses August 3. One teacher spoke bluntly: “Let me explain something. I contracted the virus at the same time as my student’s mother. I am here. She is not. You do not understand the guilt that sits on my heart and on my mind every single day I go to work. What if I did something wrong?” Responding to community pressure, Jefferson Parish President Cynthia Lee-Sheng said that she has requested the board consider postponing the start by three weeks.

On Thursday, hundreds of Reno, Nevada teachers were expected at a rally against plans to reopen Washoe County schools on August 17. English teacher M.J. Ubando said, “Someone needed to do this. I'm not thrilled that it's me, but I had to really ask myself who I wanted to be in this moment,” reported the Reno Gazette. She had COVID-19 in April and spent weeks recovering, barely able to do simple chores. “People are going to die and I guess they are OK with that?” she emphasized, stating that if she lost her job for speaking out, it was worth it. Her husband added, “Many of us are the working class, and with opening schools, it is just going to get worse.”

On Thursday, teachers marched in Lansing, Michigan to demand Democratic Governor Gretchen Whitmer suspend all in-person education. Whitmer, who has been “fully vetted” as a possible vice-presidential pick by Joe Biden, is fully implicated in the big business drive to return to work. At the behest of the Detroit Three, she allowed auto plants to resume manufacturing in mid-May. Rachel Cain, a Grand Rapids teacher, attended the rally at the state capitol, bringing a black, tombstone-shaped sign, inscribed, "Here lies Ms. Cain. Last year she bought school supplies with her paycheck. This year she bought the economy with her life."

On Wednesday, hundreds of Georgia teachers parked outside Gwinnett County School's headquarters and blasted their horns for hours to protest the return to school buildings. Gwinnett is the state’s largest school district and was the site where nearly 300 school employees either tested positive or had direct exposure to COVID-19 and were forced to quarantine, just one day after in-person pre-planning. There are 17,781 positive cases in Gwinnett County, with 1,996 hospitalizations and 240 deaths, as of last Sunday.

Yesterday in Florida, a hearing was held in the Florida Education Association lawsuit against Republican Governor Ron DeSantis’ order requiring schools to reopen for face-to-face instruction. The July 6 order required all brick and mortar schools to provide five-day-a-week schooling and open in August unless state and local health officials direct otherwise.

Florida now has had more than 510,000 COVID-19 cases, the highest per capita infection rate in the US, and more than 7,745 deaths. Teachers have been staging protests around the state for weeks, including in Pasco County, Duval County (Jacksonville), Hillsborough County (Tampa), and Escambia County (Pensacola). With some schools slated to open next Monday, the union hearing authorized a change in venue, a delaying tactic.

“My husband and I are both teachers, and we have three children, two with severe asthma, and the oldest also has immune issues,” a Florida educator wrote on Facebook. “This is not right. My district isn’t even allowing me to choose between being a mom and a teacher. The choice is, do you want a job or not. Like living on one teacher’s salary for a family of five is even possible... I’m not even allowed to struggle financially to keep my family safe with the comfort that I have a position to come back to after 16 years of loyal service.”

DeSantis, an outspoken Trump supporter and school privatizer, has long aligned himself with the government’s attempt to destroy public education. Florida has seen possibly the most aggressive drive in the nation for virtual charter schools and privatization. No doubt, the state’s demand for a return to school aims to both force workers back onto the job and continue to bleed public schools of resources through declining enrollment.

In Missouri, Republican Governor Mike Parson has issued no overarching state policy regarding reopening, but infamously stated last month, “These kids have got to get back to school… And if they do get COVID-19, which they will—and they will when they go to school—they’re not going to the hospitals.” His bald admission that children will inevitably be infected, together with the claim that none will be seriously ill, has sparked great anger. It flies in the face of the well-documented and growing number of serious illnesses and deaths among young people, not to mention the long-term health implications of the virus which are still being investigated. On Monday, two Florida teenagers died from the coronavirus.

On Saturday, teachers protested in Kansas City, Missouri, after forming the Facebook group Missourians for Educational Change. Kansas City teacher Andrew Rexroat told local media channel KCUR, “We talk about the potential trauma of kids missing about three months of school. We’re not talking about the trauma of a kid potentially losing a loved one because of COVID.” Teachers waved signs that read, “Science, not politics,” and “Online until decline.”

St. Louis Public Schools teacher Grace Hogan drove four hours to attend the rally, noted KCUR. She told the crowd that teachers have to speak up because “there is no number of acceptable deaths.” She added, “For decades now, we have taught teachers that it is their job to put themselves between students and a bullet. So here we are. It’s a little bit slower, it looks a little bit different than all the drills they made us run. But this is where we are, and we will stand here and persist and insist on a better plan.”

Nevertheless, on Monday, Missouri Secretary of State Jay Ashcroft doubled-down on the return to school, stating, “At some point, we need to just put our heads down and say we’re gonna get through it, and we definitely need to send our kids back to school.”

Provocatively emphasizing the homicidal character of the demand to reopen schools, he added that he didn't “know a father alive that wouldn’t risk getting COVID, even risk dying, to make sure that his children had the greatest foundation for success for their life they could have.”

Missouri resident Joanna Martinez wrote to the World Socialist Web Site Educators Newsletter to express her outrage. “I am a parent of two students, and they plan to reopen schools in the area on August 24. I'm seriously concerned about my children’s well-being and that of the staff.

“There is no requirement for the staff or the students to wear a mask. The rooms are not big enough to practice social distancing. There are not enough safety precautions in place to assure my children will be safe while attending school.

“They are not offering homeschooling online, half days. There are no precautions, no plan, nothing at all. It’s got a bunch of parents here just freaked out. They’re looking into parents signing a death waiver. I talked to my mom, who is a nurse. She told me she would not sign that paper and wouldn’t blame me if I didn’t want to send my kids back. It’s very dangerous.

“My frustrations are beyond limits, and my fear is indescribable. Our children need an education, but their safety is number one. The county and district seem to be selfishly putting that last. They say not many children have been affected, but that’s just because they closed the schools. Once they open, it’s going to be a disaster.

“I think that a nationwide strike is what needs to be done. I do not believe that it’s safe for schools to open right now. If they do reopen, we will see a significant jump in positive cases and possible death increase with young children. I feel they are completely neglecting the well-being of the students, staff and parents for their own personal gain and it’s disgusting.

“I just hope more people will put their foot down and stand up for the children and teachers.”

The SEP’s statement urges educators and all workers to form rank-and-file safety committees, to contact us for assistance in organizing your struggle, and to sign up for the World Socialist Web Site Educators Newsletter to follow nationwide and international developments in education.

For a nationwide general strike to halt the drive to reopen schools!
[5 August 2020]