Last week, the Democratic governor of New York, Andrew Cuomo, announced that he would allow schools to reopen for the 4.4 million public school students in the state if the statewide infection rate is under 5 percent of those tested. School districts will be allowed to choose whether or not to resume in-person instruction after a plan has been submitted to the state education department. The week before, the Democratic mayor of New York City, Bill de Blasio, announced that the city’s 1.1 million students would attend a hybrid learning program—which alternates in-person and remote instruction—if the infection rate is under 3 percent of those tested citywide. 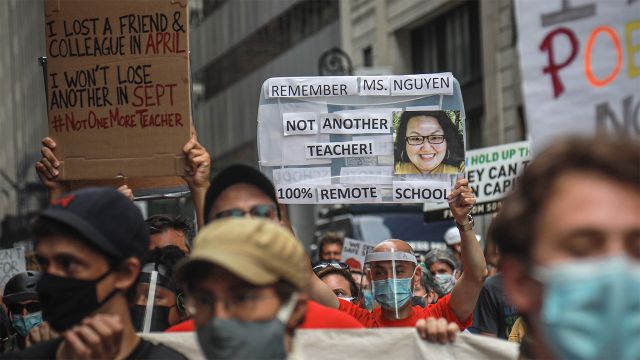 Both plans are shoddy and leave so many unanswered questions about the implementation of safety measures for staff and students that educators and parents have widely rejected them as bogus.

The World Socialist Web Site has noted that Cuomo’s announcement is an endorsement of Wall Street’s back-to-work plan to reopen the economy—in the midst of the coronavirus pandemic in which 1,000 Americans are dying daily—so that the working class can generate profit for the ultra-wealthy, regardless of the consequences.

One teacher in the Albany area told us: “We’re experiencing different infection rates in various parts of the state, so local plans make some sense. However, that leaves open the possibility of poorly developed plans, especially among poorly resourced districts and those dominated by right-wing politics.

“Cuomo’s approach represents an abdication of the state’s responsibility. The state is not providing enough support. Much more money and other aid is needed in order to develop adequate protection plans. These poorly developed plans will probably lead to a spike in infections.”

We noted how the infection and death rates in New York state have been reduced considerably since their peaks a few months ago and asked the teacher if he thought it was safe to conduct in-person classes under current conditions.

“No, it is not,” he answered. “The reductions were due to the use of masks, social distancing, and other protective measures. Reopening will create conditions to renew the spread of the virus. Poorly resourced schools are without proper facilities: ventilation, sanitation, PPE, testing, adequate distancing.

“Renewed shutdown after infection rates increase, as envisioned by Cuomo, will mean that there are new, unnecessary victims. This is the assumption inherent in Cuomo’s plan.”

Discussing whether parents, teachers and students have been adequately consulted in the Albany area, the teacher replied: “Parents are under enormous stress to do right by their children. Those with limited means are under especial pressure, caught between the need to keep their children safe and the need to go to work. The majority opting for keeping their children home, despite the economic pressure, indicates their extreme fear of the disease.

“Being asked to return to work in an environment that is unsafe for faculty and students is daunting. This is exposing the decades of underfunding of education and lack of adequate facilities such as affordable daycare. This will not be a normal environment, especially for special needs and English-language learners who will be in school five days a week. They will constantly be reminded that they are being singled out and put in increased danger as compared to other students.

“I expect there will be wildcat strikes as were seen a few years ago in West Virginia and elsewhere. The rhetoric of the unions is becoming more militant, but the plans proposed do not follow their statements. Andy Pallotta [New York State United Teachers president] is merely saying to follow state guidelines, while posturing as a defender of teachers. The unions will be okay with sending teachers back into unsafe conditions.

“The state does the bidding of the ruling class. It is pushing students back to school to get the economy back. What is especially telling is that Cuomo has just recently restated his opposition to raising taxes on the rich because they would leave the state. New York could continue the lockdown if resources from the rich were used to support families and keep children home until adequate testing, tracing and quarantining are in place.”

A high school teacher in Manhattan, who did not want her name used, said that her teenage son had too much difficulty with remote learning. She feels compelled to send him for in-person learning if his school reopens, adding that she is trying to get a personal medical leave so that she can stay home and do remote teaching. “I am terrified because my mother has Alzheimer’s and I am her caregiver. I bring my kids to see her, otherwise she has no visitors.

“They are throwing teachers back on the fire. All science proves it is dangerous to go back to work. Reopening is not safe. My students take city buses to school. In my neighborhood, most people are not wearing masks, or just hang them off their ears or not covering their noses. I think it is because there has not been enough education by the city government. They should have signs all over and enforce mask wearing.

“I agree with what I read from the WSWS. In my school a few teachers have formed a committee for safe reopening. We sent a letter to parents that it would not be safe, urging them to choose not to send their children for in-person teaching. One-third of the parents have chosen remote learning for their children. We spoke to the principal and called the other teachers, who generally follow the lead of the principal. Seventy-five percent of the teachers agreed to the letter and the principal agreed that we could send it but not with a school heading, just as teachers of the school. I have also been able to talk with teachers from other schools who I meet with in a Zoom meeting. The majority of teachers are uncomfortable and against going back. The government is only interested in getting people back to work, not being safe or providing them with what they need.”

Richard, an 11th grade student from Brooklyn, New York, told the WSWS, “I’m nervous because I heard that one school that reopened early had to quarantine in the same day.”

He added, “I personally don’t think schools should do in-person learning at all until there’s a vaccine, but I also worry about the impacts of being cooped up in their homes for most of the day, and what this might do for students’ mental health, since humans are naturally social beings.

“I’m ashamed and disappointed that although we’re considered one of the top countries in the world, we’re basically the country with the most COVID-19 cases, while other countries have gotten it under control. I honestly thought that hospitals were going to offer free care for those with COVID, but I found out that people still have to pay to get treated as if COVID wasn’t anything much. It just shows how much money is of importance in this society and it just saddens me.

“I think we should just keep unnecessary and nonessential businesses closed for a while, since cases are starting to rise again. Getting drinks and having a haircut or something small like that isn’t all that important and necessary. I feel like if the rich can keep their kids from going to school, why is the public supposed to send their kids to school?”

When asked about the Socialist Equality Party’s call for a nationwide general strike, Richard said, “I think the proposal for a national strike to force companies and big businesses to shut down unnecessary businesses is really important and necessary, since we all need to voice our feelings and opinions and to say that ‘this isn’t right.’ Wealth shouldn’t be prioritized over the lives of people and our lives shouldn’t be at risk just so big businesses can continue to operate.”

For a nationwide general strike to halt the drive to reopen schools!
[5 August 2020]