A law passed by the German parliament on May 7 promising support for students and the sciences during the coronavirus pandemic has proven to be a “calculated fraud,” as correctly assessed by the World Socialist Web Site on June 13. It is in fact a blatant attempt to make students pay for the crisis.

Since June, angry and indignant posts have been mounting on social media from students accusing the government of ignorance and inaction, disregarding the needs of roughly a million students in need of assistance. 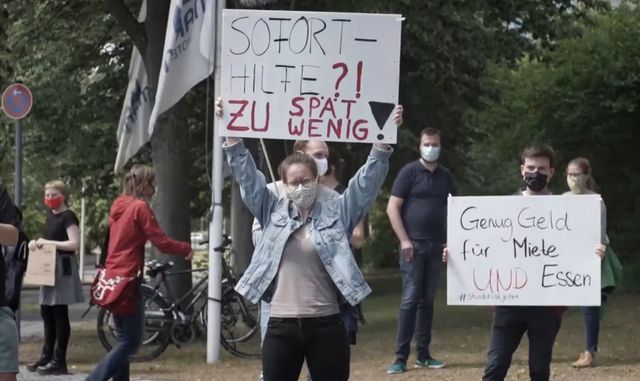 Students demonstrate on June 8th in Bonn for greater assistance

Most of the criticism is directed toward the so-called “stop-gap aid,” stipulated in the law to be paid from an “emergency fund” of €100 million. Students who lost their jobs during the months of March, April and May because of the pandemic and who are facing existential need can apply for a subsidy of €100 to at most €500 for the months of June, July and August. The applications must be submitted to each university’s Studentenwerk, state-run non-profit organisations for student affairs at German universities.

Students who lost their jobs before March and were unable to find new employment because of the lockdown are automatically excluded from funding, regardless of whether or not they are threatened by existential need. Likewise excluded are students whose bank accounts contained more than €500.

In a June 16 tweet, one student commented: “In Germany you are considered poor with an income of 781 Euro per month. Unless you are studying, then [Education Minister] Anja Karliczek says that with 500 Euro in the bank you are so rich that you can’t get state support.”

It is entirely clear that topping up accounts capped at €599 changes nothing in the existential situation confronting many students.

“In almost no university town can you make ends meet with that. Then there are the costs from the previous months. And the assistance is only for June, July and August. The Corona crisis, on the other hand, has no end in sight,” commented Amanda Steinmaus, executive member of the fzs (Free Association of Student Bodies), on the organisation’s website on July 2.

That alone would explain the anger and disgust of many students. On the one hand, the €100 million in “stop-gap aid” provided by the federal government is a pitiful sum that could support at most 66,666 students for three months at €500 per month. In June alone, 82,000 applications were submitted to the emergency aid fund.

The level of need, as Steinmaus made clear, lies well above that: “According to a survey, a million students during the Corona crisis are in serious financial need.”

The application process is handled by each university’s student union and is a huge administrative act. Just for software with which students can apply for the stop-gap aid, the Ministry of Education paid €325,027.

An additional €25 processing fee is applied to every application. Because a separate application is required for each month of support, the administrative costs are trebled. Disbursements only reach students after long waiting periods. The first applications were processed on June 29.

Soon after the application process started, it became clear that the intention of the federal government was not to help students out of a financial emergency with stop-gap aid. Of around 82,000 applications, roughly half were rejected. One common reason given for the rejection was that the pandemic could not be blamed since the student’s employment had been terminated before March, or students were given the automatic response that the application was rejected due to illegibility or incomplete documentation.

There are increasing reports in social media from students whose applications were rejected although their accounts were negative or under €10 and without further indication of which documents were illegible or incorrect.

“I myself meticulously and completely scanned in documents for hours. The Studentenwerk and the hotline of the ministry of education wouldn’t tell me why I was rejected…,” complained one student on social media.

In the meanwhile, it has become known that the application software has had problems uploading and opening the required documents. Roughly half of the rejected applications are affected by this issue. Despite the faulty software, students receiving rejection notices cannot submit further documents and as such lose their right to any aid.

This is a deliberate failure to provide assistance on the part of the federal government. In this way, the government is squeezing more money out of the working class to finance bank rescues, the artificial inflation of the stock market and massive armament programmes.

In light of this, it borders on audacity that Education Minister Anja Karliczek (CDU) explained the high rejection rate by claiming that many students might possibly have withdrawn their application for stop-gap aid because they no longer need the money.

Exactly the opposite is the case. At the end of July, the Kreditanstalt für Wiederaufbau (KfW—a significant German, state-owned development bank) reported receiving 22,000 new applications for student loans totaling €641.6 million since May.

This will have devastating consequences for many students since the “interest-free” loans for students, which in addition to the €100 million “stop-gap aid” represent the heart of the “emergency aid” for students, are essentially normal KfW loans that have existed in their current form since 2006 and have to be repaid with high interest.

Here, too, it becomes clear that Karliczek is not interested in helping students, but rather in building up student loans as an alternative to BAföG (subsidised government loans for students) in the long term. As in the United States, students will then start their careers with a huge mountain of debt.

The systematic nature of the cost reductions implemented in recent years is becoming apparent to millions of people in the course of the COVID-19 crisis and palpable for those directly affected. It is a fatal mistake to believe that appeals to the federal government can change its ruthless policy. As the current situation shows, the federal government has not made BAföG quickly and unbureaucratically available to students in need, even though the annual BAföG budget has not been exhausted. The fzs notes that the BAföG fund currently contains €900 million that are being withheld from students.

Many students in need will be forced to drop out of their studies in the coming semester in order to apply for basic security [ Grundsicherung ], since students are not entitled to Hartz IV unemployment benefits. Early dropout figures are already available for Berlin. According to the Senate Chancellery, there were around 4,600 dropouts in 2019. In 2020, there have already been 5500, around 20 percent more than in the previous year

As in all areas of society, the coronavirus pandemic exposes the reality of social inequality at Germany’s universities. It is the result of the same policies that are jeopardising the lives of millions of people to harvest profits from the economy and accelerate the redistribution of wealth from the bottom to the top of society.

Students must see the blatant attacks on equal access to education in relation to the criminal reopening of schools, massive job cuts in the auto, aviation and other industries, and the hasty and irresponsible resumption of production that are endangering the lives of millions of people. Students and workers must combine their protest with the struggle for an international socialist perspective.