The University of Michigan graduate student strike: A significant step forward for workers and students

On Tuesday morning, approximately 1,000 graduate student workers at the University of Michigan went on strike to oppose the dangerous health and working conditions they are being forced to return to on campus amid the surging COVID-19 pandemic.

The strike is part of growing opposition among workers and students across the country who face the same criminal and reckless “back-to-work” policy being carried out by university and school administrations, major corporations and both political parties.

The University of Michigan Graduate Employee Organization (GEO) members voted overwhelmingly to strike, with at least 80 percent voting in favor of a walkout over the weekend. This comes despite belligerent intimidation from university administrators, who rejected the demands of the graduate student workers. Administrators claimed the strike action violates state and contract law and are preparing “to continue operations, including classes.” 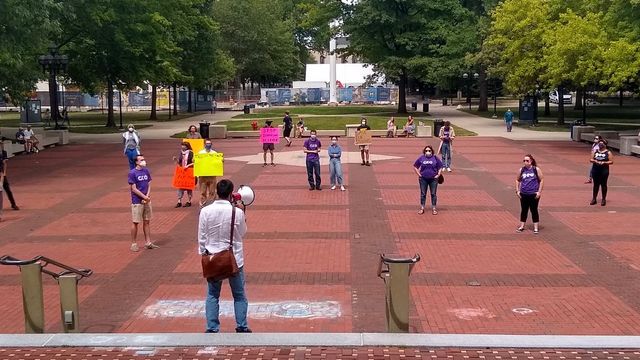 The drive to reopen schools and workplaces has already led to tens of thousands of deaths. Now, more than 50 million K-12 students and more than 20 million college students are being forced to return to school in some capacity or other.

Since reopening colleges and universities in late summer, more than 51,000 positive cases have been documented on over 1,000 campuses across the United States, with 35,000 cases in the last three weeks, according to the New York Times. More than 100 colleges have reported over 100 cases each. At least 60 deaths have been reported thus far.

At the University of Michigan, reports are starting to emerge of outbreaks at multiple dormitories this week. There have been 58 positive cases in the last two weeks alone. At least five deaths have been unofficially reported among staff on campus during the pandemic.

The GEO is currently demanding improved testing and contact tracing, a universal right to work remotely without documentation, a care subsidy for parents and caregivers, a $2,500 unconditional emergency grant, and rent freezes, all of which the administration rejected as financially unfeasible, leading to the strike vote. Over 1,800 graduate students signed the open letter in which GEO published its demands, indicating their hunger to fight against the UM administration's homicidal back-to-school policies.

The strike action immediately gathered broad and strong support among students and staff. Social media posts by striking student workers have been met with overwhelming support from students on campus and around the country, as well as by other sections of workers.

Alex, a first year student, told the WSWS, "The strike is very exciting for me. I support them and I'm going to join the picket line at 5 am tomorrow. There is significant support for the grad students from undergrads and the community.

"My fear is that if there is a serious outbreak, the university officials won't even allow us to leave. They might make us stay in the dorms. When we arrived they only gave us two masks, which are so thin, you can blow out a candle."

Another undgrad told the WSWS, "The University of Michigan is acting more like a business. They raised tuition over the summer. They see us more as commodities than as students. They look at the grad students the same way."

Posting on Facebook, a researcher wrote, "I've been working in-person in the lab all summer, and worked doing COVID door screenings for various research buildings as Michigan Medicine. The university truly has no safeguards in place. We have no widespread testing, a 24/7 Covid 'compliance hotline,' which didn't even pick up when I called today, and undergraduate RAs/housing staff are not being provided sufficient PPE and are being told in their online training modules to not enforce the 'no visitors' dorm policy 'unless someone complains,' despite the fact that students are being assured this is one of the rules in place to keep them safe."

Late Tuesday, UM's Central Student Government (CSG), which represents the nearly 30,000 undergraduate students, unanimously passed a resolution to support the striking graduate students. The resolution denounces the administration's declaration of the strike to be illegal as "reprehensible," and asks students not to cross the picket lines.

Some picket lines were formed near construction sites around the campus. In a critical expression of class solidarity, electrical and construction workers refused to cross the student picket lines on Tuesday morning.

Students at the University of Iowa, an epicenter of the COVID-19 surge, have launched a series of protests. These include a large-scale sickout of nearly 1,000 students and an open letter published yesterday in response to their administration's reckless reopening.

The open letter demands that the school move to completely online instruction, claiming there is broad support from professors and staff as well, and expresses outrage at the revelation that every class has had at least one student infected and several had an infection rate of over 10 percent. Such sentiments are undoubtedly growing on hundreds of college campuses across the country.

The strike at the University of Michigan can be the tipping point for the further development of broad strike action—not just on campus, but in every section of the working class facing dangerous working conditions. For this reason, above all, it is critical that the strike be broadened and connected to the growing opposition among students and workers.

One of the most critical aspects of this struggle will be for the graduate student workers to understand the role of the unions. They must not be fooled by the false claim that the American Federation of Teachers (AFT), with which the GEO is affiliated, or, for that matter, the National Education Association (NEA), the United Auto Workers (UAW) or any of the other state-sanctioned unions “represent” educators.

Bitter experience has shown the opposite: the AFT and the other unions have spent decades colluding with state and district officials in the systematic undermining of teachers’ conditions, the closure of schools, budget cuts and school privatizations. This includes the recent sellouts of grad struggles at the University of California, the University of Chicago (where grad students disaffiliated from the AFT) and Columbia University.

Despite the enormous opposition among teachers to the back-to-school campaign, the AFT has done nothing to mobilize broader support behind the UM strikers.

Grad students should organize a rank-and-file strike committee, answerable to university workers—not the trade unions and the Democratic Party—to wage a real fight against the deadly return to in-person schooling.

What is needed instead is a turn out to the working class with a political counter-offensive independent of the ruling class parties and the unions bound up with them. Students, staff and faculty at the University of Michigan must unite not only with their counterparts in other universities and schools, but also with the working class as a whole. They must build rank-and-file safety committees, which are already expanding throughout the US and internationally. This is the only viable path forward for students, staff and faculty facing the onslaught of the ruling class’ back-to-work campaign. It is the path of socialism.

We urge teachers, parents and students who are concerned about the rapid spread of COVID-19 in schools to register for the next meeting of the Educators Rank-and-File Safety Committee, which will be held this Saturday, September 12, at 3 p.m. Eastern Daylight Time.