The presidents and chancellors of the universities that make up the Big Ten college football conference announced Wednesday morning that they had unanimously voted to reverse their earlier decision to postpone the football season. The Big Ten’s season is set to begin on October 24 with each team playing eight games, one each week, and a final championship game on December 19.

After the initial decision to postpone, it was speculated that the season would not resume until the spring at the earliest. However, political pressure, including the intervention of President Donald Trump and huge financial interests, pushed the schools to have a rapid resumption of the 2020 football season. 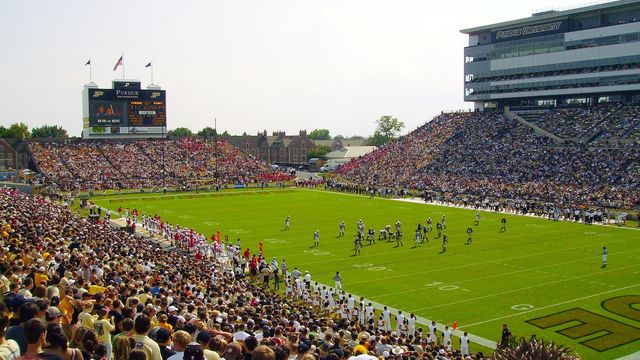 The conference includes the largest public universities across the main centers of US industry, and, not coincidentally, states vital to the outcome of the 2020 elections: New Jersey, Pennsylvania, Ohio, Michigan, Indiana, Illinois, Wisconsin, Minnesota, Iowa and Nebraska.

The decision flies in the face of the advice of the Big Ten’s own medical advisers, who up until the last few weeks were in agreement that holding football games would be far too dangerous until at least 2021. Now the Big Ten leaders are claiming that they have achieved a plan that will prevent an outbreak. President of Purdue University Mitch Daniels, the former Republican governor of Indiana, remarked, “Things we all learned, along with some technological advances, have produced a plan that is safer for our players and staff than it would have been originally.”

The Big Ten plan stipulates that players will receive daily testing for COVID-19 and that players who do test positive will have to sit out for 21 days before being able to return to the field. If a team records a positivity rate of over 5 percent then they will halt their games and practices.

In addition, players who are positive for COVID-19 must pass a series of heart tests including a cardiac MRI. The heart screening component was added after news broke that a large percentage of college athletes who tested positive for COVID-19 had developed myocarditis, an inflammation of the heart that can be deadly when untreated.

Even if these measures are implemented properly, of which there is serious doubt, it is not believable that holding football games under the present circumstances can be done safely. Not only will dozens of young athletes be in direct physical contact with one another, but there will be hundreds of additional support staff and TV crews present at the games. Regular fan attendance will not be allowed, but family members of the players will be permitted to watch the games in person.

There have been at the very least 8,500 confirmed cases of COVID-19 at Big Ten schools. Several schools in the Big Ten, including the universities of Illinois, Iowa, Michigan and Wisconsin, have become epicenters of the pandemic. At the University of Michigan, graduate students have been on strike since last week to demand online-only classes to stop the spread of the virus. Similarly, students and faculty at the University of Iowa have staged “sickout” protests against face-to-face classes.

After large outbreaks on campuses, several schools, including the University of Wisconsin, have adopted restrictive isolation rules for their students to attempt to lower their number of cases before the football season is set to begin. Students have been ordered to remain in their dorms in what they are describing as prison-like conditions with poor food and without basic necessities.

The resumption of college football is driven by profit. Estimates placed the losses for the Big Ten should the season have been canceled at more than $700 million. A major part of that revenue comes from a billion-dollar TV broadcasting deal that the Big Ten signed with Fox Sports in 2016. The deal sees Fox paying $250 million dollars per year for the exclusive right to broadcast games live. Even when playing to empty stadiums, universities stand to take in hundreds of millions of dollars in TV deals and ad revenue from sponsors like Nike, Under Armor and Coca-Cola.

As has been the case for the general student bodies as they returned to campuses this fall, the administrators, many of whom are former big business executives and politicians paid salaries into the hundreds of thousands of dollars, are well aware that it is not safe to hold football games or to have students on campus. But the health and lives of the students are not their concern. For them the universities are corporations and students, athletes and teachers are only the source of value from which profit must be extracted.

The priorities are made evidently clear by the allocation of resources for COVID tests and medical resources. Students at Big Ten universities and other schools are finding that they have no access to testing while forced to live in conditions where they interact with hundreds if not thousands of others on a daily basis. They are considered expendable while the football team, whose health is necessary for the games to continue, are given access to daily testing and other safety resources. This however, is still no guarantee against further outbreaks among players.