The case for a general election: Expose the Tory-Labour conspiracy to drag Britain into World War III!

A general election must be used to alert and mobilise the working class against the catastrophic policies of the Tory government and its de facto coalition party headed by Sir Keir Starmer.

Point 10 proposes to end the ban in the draconian Civil Contingencies Act on using emergency regulations to stop strike action which the government deems will create a “national emergency”.

The eight-day strike would immediately have a huge impact on the UK economy and global maritime trade.

Britain and its allies are providing fodder for the bloody war with Russia, in which the Ukrainian military is reported to be losing up to 200 soldiers a day

Subscribe here for regular updates on the party's work, key articles from the World Socialist Web Site, and notifications of upcoming events. 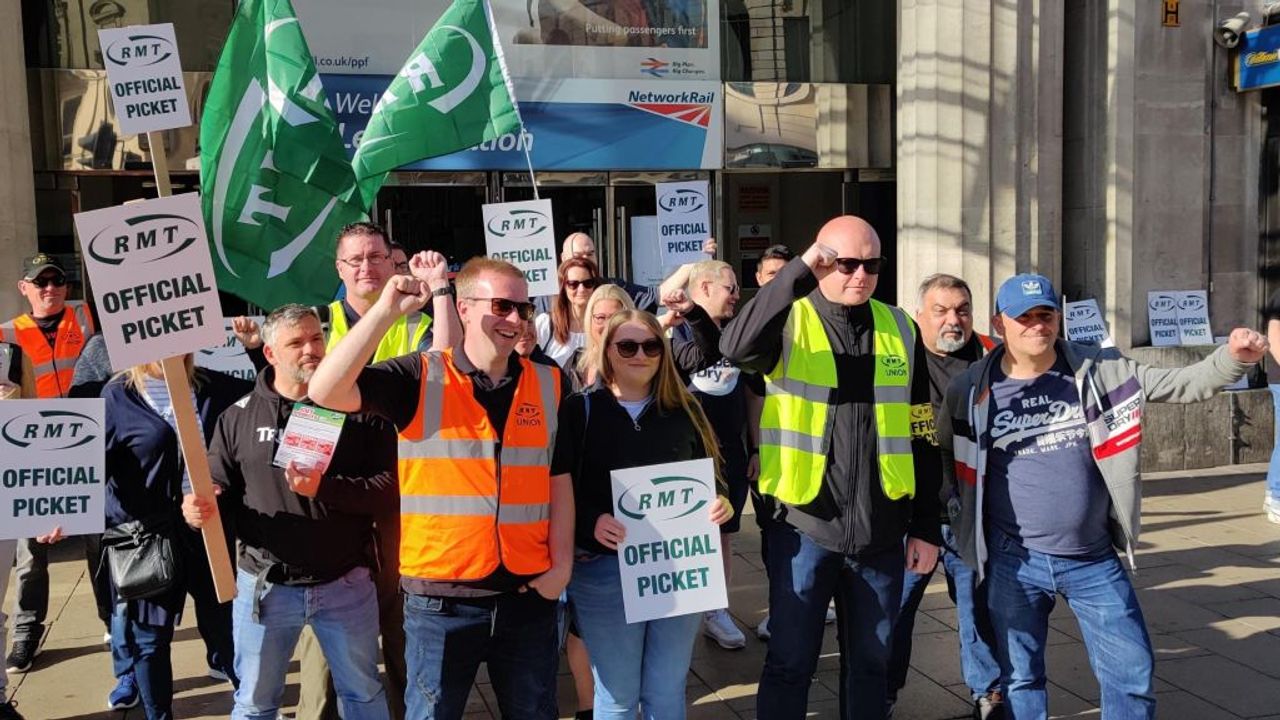 Lessons of the British rail strikes

It is necessary to draw a balance sheet of last week’s national strikes and the political lessons for the working class.

The British rail strike: Mobilise the entire working class against the Johnson government!

The strikes and ballots in the UK are part of a growing wave of militancy worldwide provoked by the same desperate cost-of-living crisis.

The Challenge of May Day 2022: For the International Unity of the Working Class against Capitalism, National Chauvinism and War!

The celebration of May Day 2022 must be dedicated to the unification of the international working class in a global struggle against imperialist war and its root cause, the capitalist system.

An open letter to all workers: The pandemic must be ended and lives saved in 2022!

As we approach the end of the year, workers in the UK and throughout the world must decide to act collectively and finally put an end to the COVID-19 pandemic. 2022 must not be another nightmarish year of mass infections, illness and death!

For a Global Workers’ Inquest into the COVID-19 Pandemic

This Inquest is necessary to break through the cover-up, falsifications and misinformation that have been deployed to justify policies responsible for the avoidable deaths of millions since the initial detection of SARS-CoV-2.

An inflation-busting 20 percent pay rise for rail workers! Defeat the Great British Railways scheme! Expand and unify disputes in every sector! Wage a political fight to bring down the Johnson government! Build the Socialist Equality Party as the leadership of the working class!

go to page
For rank-and-file committees!

Workers all over the world are opposed to the continued operations of nonessential workplaces as the pandemic still rages. But workers need new organizations of struggle because the unions have sanctioned this homicidal policy.

The World Socialist Web Site and the Socialist Equality Parties are assisting workers everywhere in the building of an interconnected network of rank-and-file committees in key industries and workplaces, to stop the spread of COVID-19 and save lives, and prepare for a political general strike.

The London Bus Rank-and-File Committee is fighting for a strategy to win, linking the fight for pay with urgent health measures to stop the pandemic and reverse the decades-long attack on conditions.

The UK unions’ contempt for their members health and lives could not be clearer. Their statement acknowledges, “last term education staff were more likely than other workers to test positive”, only to complain that this was “inevitably leading to disruption of education.”

SOS NHS was established to deflect from and cover over the treacherous refusal of the trade unions to mount any kind of fight over the pay and conditions of staff and oppose the ongoing privatisation of the NHS.

Subscribe here for regular updates on the Committee's work, key articles from the World Socialist Web Site, and notifications of upcoming events.

Click here to go the the London Bus Rank-and-File Committee Facebook page, independent of the pro-company unions, for bus workers to discuss how to protect themselves from the COVID-19 pandemic and fight for workers' rights.

Click here to go the the NHS FightBack Facebook page, managed by the Socialist Equality Party (Britain), which leads the fight to establish rank-and-file committees of NHS workers.

Join here
For the United Socialist States of Europe!

Workers in Britain must reject all forms of racism and nationalism and link their struggles with workers in Europe and throughout the world. Against the European Union and its pro-business governments, we stand for workers’ rule across the continent.

From the beginning of the Brexit referendum campaign in 2016, the SEP called for an active boycott, opposing both the nationalist calls for an 'independent' Britain and the capitalist European Union, which has dictated savage austerity, militarism and attacks on refugees across the continent.

The insistence of European governments on fully reopening schools, workplaces and public gathering places has paved the way for a devastating resurgence of the virus.

read here
statement of the socialist equality party (britain)
Britain leaves the European Union: Against nationalism, For the United Socialist States of Europe!

Workers and young people in the UK must orient themselves not to British nationalism or the EU, but to the growing global upsurge of working class struggle.

Almost two decades after the United States launched the “war on terror,” the entire world is being dragged into an ever-expanding maelstrom of imperialist violence. Millions have been killed by the wars of US imperialism and its allies in the Middle East and Africa, and tens of millions maimed or turned into refugees. A century after the end of World War I, these conflicts are once again metastasizing toward a catastrophic global conflagration.

The ICFI and SEP are fighting to build a new international anti-war movement of the working class. The fight against war is the fight against its source, the capitalist profit system.

read here
Trotskyism is the Marxism of the 21st Century

Leon Trotsky founded the Fourth International as the World Party of Socialist Revolution in 1938, to oppose the Stalinist degeneration of the Communist (Third) International.

An appraisal, on the occasion of the eightieth anniversary of Trotsky’s assassination, of the work of the great theoretician and strategist of World Socialist Revolution during the final year of his life.

On Sunday, March 7, the World Socialist Web Site held an online meeting to mark the 150th anniversary of the birth of Rosa Luxemburg, the great revolutionary leader. The meeting examined Luxemburg’s role as a Marxist theoretician and political leader, and discussed the significance of her immense historical legacy to the contemporary struggle to build a Marxist leadership of the international working class.

The Biden administration is seeking to extradite Julian Assange, an award-winning Australian journalist, to face charges of espionage that carry a life sentence and possible death penalty. His only “crime” is the publication of document exposing the war crimes and diplomatic intrigues of US imperialism and its allies.

We urge all defenders of democratic rights and opponents of imperialist war to get involved and join the fight to free Julian Assange!

read more
Statement of the wsws International Editorial Board
For a worldwide campaign to prevent Julian Assange’s rendition to the US!

An international mass movement must be organized to stop the extradition of Julian Assange to the United States.

read here
speech by chris marsden
“Victories are not won through political cowardice, but in struggle”

This speech was delivered by Socialist Equality Party National Secretary Chris Marsden to a public rally held in London on Sunday February 23 2020.

No to Internet Censorship!

In virtually every country, governments are seeking to crack down on the internet, prevent the spread of socialist and left-wing views, and stop workers from being able to communicate and organize online. They are collaborating with the giant social media and technology corporations including Facebook, Google and Twitter to engage in censorship.

read more
an open letter to google
Stop the censorship of the Internet! Stop the political blacklisting of the World Socialist Web Site!

read more
an interview with andre damon
Meet the Censored

Increased content moderation has been sold as a tool to control the far right, but the World Socialist Web Site was among the first to sound the alarm.

read more
The fight against fascism

Unprecedented levels of social inequality, continuous wars and the drive to great-power conflict are incompatible with the maintenance of democratic forms of rule. Around the world, capitalist governments are building up the state apparatus, surveillance and censorship directed at the population.

From the United States to Germany, fascist forces are being systematically promoted by the ruling class. Their elevation is part of preparations to violently suppress mass opposition in the working class to social inequality and war.

read more
wsws online meeting
Where is America going? Trump’s coup and the rise of fascism

At this event, leading members of the SEP in the US, Germany and UK spoke on the national and global significance of the rise of fascism in America, its social and political origins, and the necessary strategy for the working class to fight back.

watch here
speech by david north
What is fascism?

David North, the National Chairman of the Socialist Equality Party (US) and the Chairman of the International Editorial Board of the World Socialist Web Site, addressed a meeting of students and workers at Wayne State University in Detroit on April 11, 2019. The meeting was part of the series “The Threat of Fascism and How to Fight It.”

The International Youth and Students for Social Equality (IYSSE) is the student and youth movement of the Socialist Equality Party. It fights to unite students and young people for peace, equality, the rights of the working class and socialism.

Students are being treated as little more than cash cows for a marketised higher education system and scapegoats for a programme of “herd immunity”.

After dominating life on campus for years, identity politics has produced two results: the machinery for anti-democratic crackdowns which can now be taken over by the government and the right, and a growing resentment against what calls itself “progressive” politics that greases the right’s wheels.

Marsden joined the Trotskyist movement in 1983 and has played a leading role in the work of the International Committee of the Fourth International for over three decades. He is also a member of the international editorial board of the World Socialist Web Site.

Thomas Scripps is the assistant national secretary of the Socialist Equality Party. He joined the Trotskyist movement in 2012.