On Monday, a former high-ranking official of the French employers’ organisations, Denis Gautier-Sauvagnac, confessed to having secretly financed France’s main trade union confederations to the tune of tens of millions of euros.

The former head of the Engineering Employers Federation admitted to the judge that bank withdrawals totalling €16.5 million in cash from an account of the engineering employers’ mutual aide fund were destined to the unions. These payments occurred from 2002 to 2007.

The affair reflects the internal struggles of the French ruling elite that came into public view as it prepared to carry out attacks on pensions under President Nicolas Sarkozy in 2007. In 2004, the finance ministry was already examining illicit withdrawals from bank accounts of the Engineering Employers Federation (UIMM) headed by Gautier-Sauvagnac. He was considered to be a rival of Laurence Parisot, then head of the French Employers Federation (Medef), and in tactical disagreement with Sarkozy on certain issues of policy.

In 2007, Gautier-Sauvagnac was charged with “breach of trust” and “illegal employment” for having given UIMM employees extra, unreported cash payments.

Leenhardt also indicated that corporations use the unions to police and limit opposition in the working class: “The employers needed unions which are solid. When you have strikes and management being detained, you are more than happy to have a union capable of channelling these excesses and encouraging a return to work”.

On Monday, Gautier-Sauvagnac returned to his previous statements to the courts. “In reality, I recognise that up to now I have not been clear enough and I here confirm the words of Arnaud Leenhardt”, he said. He declined to name the people benefiting from UIMM funds.

Gautier-Sauvagnac pointed out that these financial aids took two different forms. The first, in the form of cheques, “involved purchasing advertising space at inflated prices or hiring expensive stands, or again purchasing union newspapers”. He indicated that this was “a way to mask contributions” involved in financing the unions. “But that was not sufficient, and it was a pretext which had its limits”, he continued, the rest of the aid was distributed “in cash … more discreetly”.

Dominique Renaud, head of the UIMM accountancy department, described how this occurred: “Once a week, I went to Mr. Gautier-Sauvagnac’s office to sign the UIMM’s payments.… If Mr. Gautier-Sauvagnac needed money, he would say: ‘We need such and such an amount.’ Each time, I was in the habit of withdrawing €200,000.”

Jacques Gagliardi, a former UIMM research director, said in 2008 that Pierre Guillen, Gautier-Sauvagnac’s predecessor, “gave cash payments to the unions… Concerning the CGT, he told me that he gave them hundreds of thousands of francs every year.”

The unions have not denied Gautier-Sauvagnac’s remarks. Through a top official, the engineering branch of the CFDT acknowledged receiving financial aid from the UIMM for “reimbursement of participation expenses in parity commission meetings received from the UIMM between 2002 and 2006, totalling €21,626.13.”

He added: “Me, personally I have never heard talk about envelopes. On the other hand, yes, the UIMM helped us by purchasing advertising in our newspapers or hiring stands at our congresses. When we were searched by the police in connection with the UIMM affair, everything was in our accounts, the traceability of these operations was very clear. We have nothing to hide”.

The CFDT claims to have handed over documents to the legal authorities showing that its accounting was legal. However, given that the money handed out by the UIMM was in cash, it would in all likelihood not appear in the organisation’s balance sheet.

More broadly, these revelations are flagrant proof of collaboration between the state, employers, and the unions against the working class. Over decades during which workers have left the unions in droves, the union bureaucracies have become empty shells, financed and piloted by the financial aristocracy.

The Perruchot Report, suppressed last year by parliament, showed the absence of an independent financial base of the unions, which are overwhelmingly financed by corporate cash and state subsidies: “Nearly €4 billion are likely devoted annually to trade union activity in France. Most of these funds (90 percent) seem to come from legal union activity in companies and government employment, while the direct contributions of union members in the form of union dues would only represent, after fiscal aid reductions, 3 to 4 percent.”

The unions’ financial dependence on the state reflects the collapse of their base in the working class and their suppression of social struggles. (See “Perruchot report exposes French unions’ ties to the ruling class”) 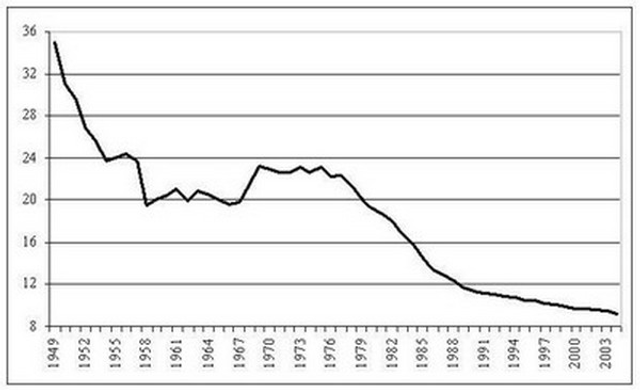 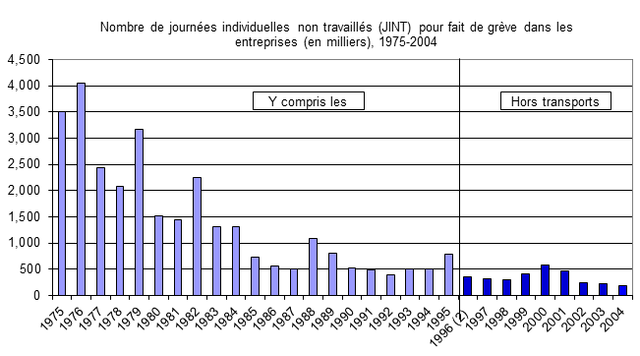 These graphs illustrate the collapse of the unions as organisations of the working class or of the class struggle.

Their reactionary, pro-capitalist role is mirrored in all the layoff agreements and attacks against social gains, such as retirement pensions in France and across Europe, which the unions have helped plan and implement. Their strategy is to prevent social protests against austerity from becoming a general strike led by the working class, which would threaten to provoke a revolutionary struggle against the sources of their own financing.

These figures underline the necessity to create new working class organisations of struggle, and a new political party to give a socialist perspective to these struggles.

The UIMM scandal reflects a long history through which the unions have been transformed from defence organisations of the working class into instruments of social reaction. Gautier-Sauvagnac noted that these contributions to the unions “were a form of support that for decades the UIMM brought to the employees’ organisations and the employers”.

This mutual aid fund for the metal and engineering industries that Gautier-Sauvagnac relied upon was created in 1972. It was prepared as an anti-strike fund during the counteroffensive of the bourgeoisie at the end of the 1970s, in response to rising struggles of workers following the 1968 general strike. This counteroffensive led to the destruction of most of northern France’s steel industry, devastating the region.

The Stalinist French Communist Party (PCF) and its union leaders, terrified of the revolutionary initiative of the working masses in 1968, sold out these struggles and pursued their integration into the state apparatus, by means of an alliance with the Socialist Party (PS).

At the same time, a layer of ex-radical students linked to petty-bourgeois movements—such as the predecessors of the New Anti-capitalist Party (NPA) and Lutte Ouvrière (Workers Struggle)—found positions and revenues inside this same bureaucracy.

These parties, which today support the PS and the reactionary administration of President François Hollande, insist today that only the unions can lead workers’ struggles. This demonstrates how the petty-bourgeois “left” has become, like the union bureaucracy itself, a reactionary force tied to the conspiracies of the banks and financial aristocracy against the working class.