As campaign builds for workers inquiry

More Detroit workers speak on pensions, jobs and the DIA

Many workers and young people at Chrysler’s Warren Truck plant and Detroit’s Eastern Market spoke out about the issues being investigated by the Workers Inquiry into the Attack on the DIA and the Bankruptcy of Detroit. The WSWS is posting more comments gathered by Socialist Equality Party (SEP) and International Youth and Students for Social Equality (IYSSE) campaign teams during the weekend.

Bernard Stone has been retired ten years after working as a union carpenter. When he heard about the Workers Inquiry being organized by the SEP on February 15 at Wayne State University, he began by saying, “I will be there. This affects me, too.” After having paid into the carpenter’s union pension fund as an active worker and union member for twenty-seven years, he is compelled to collect food stamps in order to survive. “And they just cut a percentage of that,” he said in disgust. 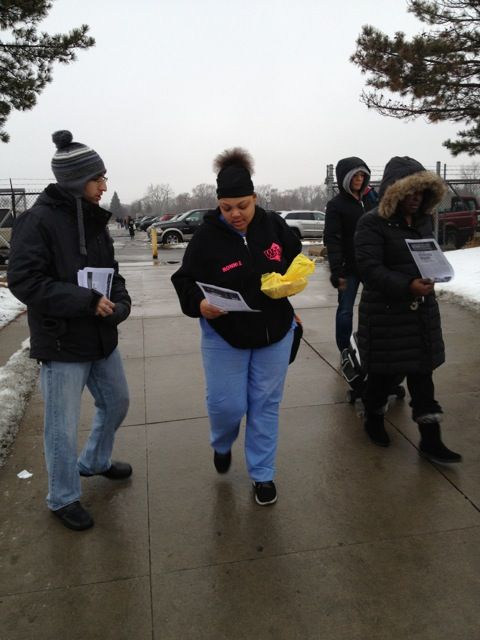 Stone went on to explain some of the hardships, which affect so many retired people living in American cities. “When I broke a dental bridge, it was not covered by my insurance, so I had to get a supplemental policy.” The cost put a major strain on his budget. And he spoke for countless others when he asked the rhetorical question, “How can we make it off this?”

Looking through some of the facts, which the SEP campaign has begun to reveal about Kevyn Orr, the unelected emergency manager, and Dan Gilbert, the local billionaire who is profiting from the economic crisis, the retired carpenter reacted with understandable anger. “Why not do some cutting at the top?” he asked. “That is our money in the pension funds they are cutting. We paid into those funds.”

And in one final reflection on the seemingly endless treachery of the unions, he commented, “Our voice is not worth anything any more.”

Dina Anderson also responded warmly. She has worked for the Detroit Board of Education for 27 years. She said the attack on city pensions, health care and the DIA affects everyone. At her position, the cuts have not yet taken effect. “But it is coming to that,” she warned and continued by explaining, “The secretaries just got cut. And I will probably be getting laid off soon.”

Timothy Smith had a similar response. When this reporter began taking notes, he was telling a campaigner from the IYSSE, “That is a capitalist society. They operate that way.” Retired after working 13 years at Chrysler and 10 years as a union painter, he seemed pleased and relieved to speak his mind on the increasingly criminal nature of the capitalist system. 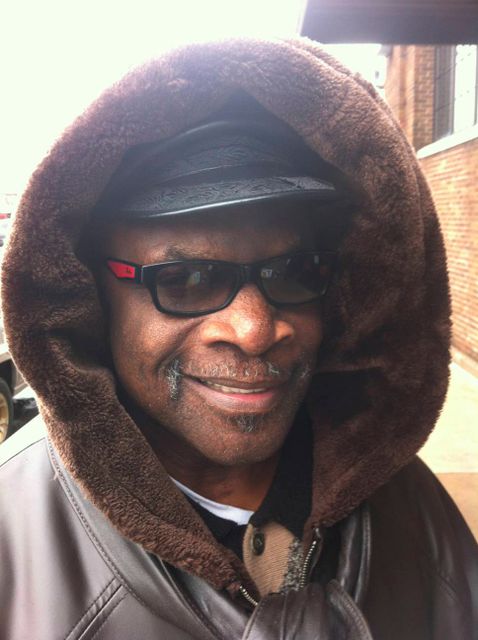 “I have been here 66 years,” he said, recalling the historic decline of living conditions for workers in Detroit. During the early decades of his life as for much of the twentieth century, it was possible for a young person to find work in a factory at good wages with the expectation of holding the job until retirement. From the time the Ford Model T plant opened on Woodward Avenue in 1913, industrial production boomed in Detroit until the onset of deindustrialization in the late 1970’s.

The great class battles of the 1930’s established the legal recognition of industrial unions, the eight-hour day and the social right to a decent retirement. The federal legislation establishing Social Security was a by-product of that volcanic upheaval of the working class. The bankruptcy of Detroit is part of the social counter-revolution being spearheaded by the Obama administration on behalf of the corporate and financial elite, which has as its central aim the destruction of all the social advances made by the working class in a century of struggles.

The statement campaigners were distributing quotes billionaire Detroit real estate developer Dan Gilbert bragging about the unprecedented opportunity to profit from the suffering of workers in Detroit. “For probably the first time in Western civilization,” said Gilbert, “large parcels of vacant, pristine land that have paved streets, utilities of all sorts, cable, phone, water, sewer” were available for the taking, he said, with “everything at affordable prices.”

From the opposite standpoint, Smith summed up the situation for workers in the following words: “In an earlier day, you could get out of your mother’s house, buy a car and have a family and a decent retirement. But not today.”

In words for the ruling elite who are secretly orchestrating the city’s bankruptcy, he summed up his view. “How greedy do you want to be? They don’t even give people a decent living. They have their foot on our necks.”

Smith began to speak about the need for workers to adopt a new perspective, which takes into account all sides of the situation, emphasizing the importance for workers to understand the treachery of the unions. “We have to look at things holistically,” he said. “The Big Three [auto-makers] are involved in this with the UAW (United Auto Workers Union). 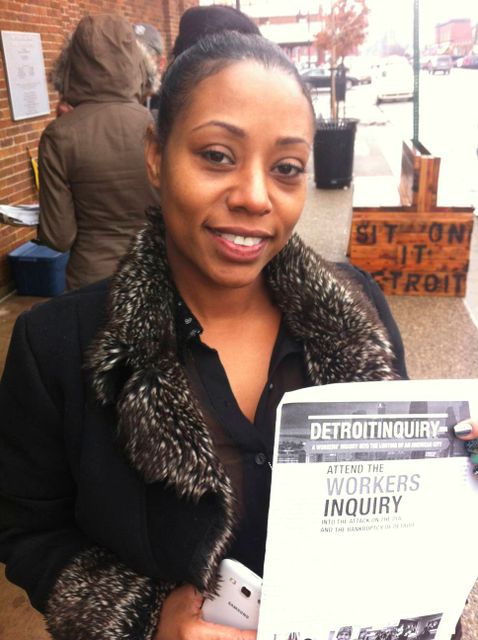 Channel stopped to lend her support to the Workers Inquiry

The recent bill signed into law by the state’s governor making it illegal for unions to enforce closed shop contracts in which all employees must join the union was a case in point, illustrating the bankruptcy of the trade unions. “How can we pay union dues all these years, and they let the state become right-to-work?” he asked.

“We need good paying jobs,” he stressed. “This city has suffered a lot because of the powers that be.” It was time for a fundamental change, he concluded.

Workers took leaflets all afternoon and offered their support. Channel stopped to say, “This affects everybody. You work for a pension. And they pass a law or a court ruling and take it away. That is not right.”

At Chrysler’s Warren Truck plant, many workers took copies of the statement and spoke to the SEP and IYSSE team about the Workers Inquiry. In a typical response one worker said, “I am so glad you are out here. I am glad that someone is fighting back.” Another added, “It is so low down. They are all crooks. People worked hard for that money and now they want to take it away.”

The 2014 Workers Inquiry into the Bankruptcy of Detroit