Over the next four years, the Australian government and corporate businesses plan to spend about $600 million sponsoring World War I centenary commemorations. These events have little to do with honouring the memory of those who died in the imperialist slaughter but are aimed at promoting national patriotism and military sacrifice in preparation for new wars. A key focus of the campaign is on the younger generation—the most impressionable layers of society.

This year the federal government and its War Memorial Educational Services began circulating a range of curriculum resources and educational activities to Australian primary schools. This includes a 60-page glossy publication entitled Audacity—Stories of heroic Australians in wartime and other so-called “educational resources” along with a letter from Minister for Veteran Affairs and Minister Assisting the Prime Minister for the Centenary of ANZAC Michael Ronaldson.

Ronaldson’s letter, which was addressed to history and social studies teachers, said the material was to encourage upper primary school students—10- to 12-year olds—to explore “stories of individuals who displayed gallantry and courage in conflicts.” 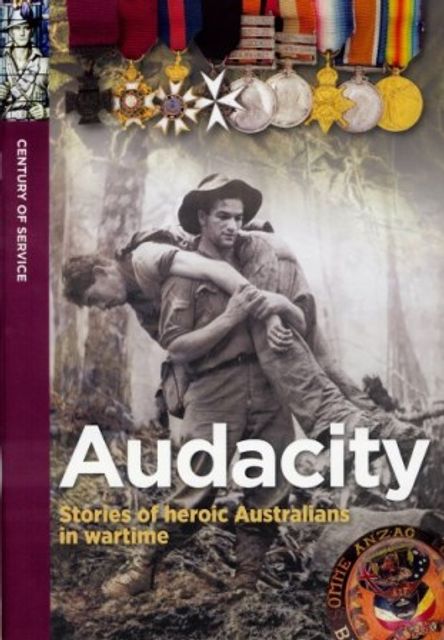 Audacity is a collection of stories about various Australian men and women awarded bravery medals during the Boer War, the First and Second World Wars, Korea, Vietnam and the Afghanistan War. Some chapters suggest various follow-up activities that could be pursued by the students, including designing medals to award fellow students at their school. Students are asked, “What should the medal be awarded for? What colour and shape will be your medal and why?”

The book presents an entirely idealised and sanitised version of war with medal recipients glorified as heroes who “sacrifice” for “freedom” while demonstrating bravery and loyalty towards “their job, their mates and their country.”

The deaths of millions of young people, the loss of limbs, disfigurement and disability, the months and years in rat-infested trenches, the shelling, chemical weapons, the terror and psychological damage are entirely absent. The driving forces of these conflicts—the capitalist profit system and the struggle over colonies, resources and geo-strategic control—are concealed.

Audacity’s chapter titles give some idea of the one-sided and romanticised view: “Outstanding and gallant service,” “Bravery under fire,” “Coolness and courage,” “Refusal to admit defeat,” “Determination and skill,” “Inspirational leadership,” “Exceptional courage” and so on.

While primary school teachers encourage the concepts of “leadership, determination, courage and skill” among their students, the government’s so-called education resources imbue these attributes with militarist and patriotic themes. Rather than providing a “balanced” view, something constantly stressed by the education departments, Audacity deliberately miseducates youth and is aimed developing an uncritical attitude towards the military and war.

“The real test” of the four-year WWI centenary, Veterans Affairs Minister Ronaldson recently told war veterans, “is whether, at the end of 2018, you and I have instilled in a new generation an understanding that the legacy is theirs. That it will be up to them to carry it into the future. If we don’t come out of 2018 with the youth of today having a comprehensive understanding that the freedoms they enjoy today were paid for in blood by others, then we have failed.”

Contrary to Ronaldson’s claims, the wars referenced in Audacity were not struggles for “freedom” but ferocious conflicts between competing imperialist powers for the division and re-division of the world, for control of markets and resources and profits.

From the Boer War in South Africa at the end of the 19th century through to the Afghanistan War at the beginning of the 21st century, Australian troops were aiding their major imperialist allies, Britain up until 1941 and after that the US. Operating within this framework, the Australian ruling elite pursued its own predatory aims in the South-West Pacific.

Audacity does not even pretend to offer a critical approach to this history but simply regurgitates the government propaganda of the day.

According to the book, Australian troops participated in the Boer War and WWI because they were always “keen for a challenge” and ready to serve the “mother country” Britain. Australian involvement in the Boer War, in fact, was to maintain British control over its mineral rich and strategically important South African colony.

Likewise, Australian involvement in WWI—at Gallipoli and on the Western Front in Europe, where tens of thousands of Australian troops were killed—was to defend Britain against its German rivals and for the seizure of parts of crumbling Turkish Ottoman Empire. The book barely mentions the terrible human carnage at Gallipoli or in the trenches in France.

Australia’s participation in the brutal US assault on Vietnam is described by Audacity as a “war against the spread of communism in Asia.” The real purpose of the US war against Vietnam, which began in the early 1960s—a few years after national liberation forces drove out their French colonial rulers—was to ensure American domination of the region. More than eight million tonnes of bombs and defoliants were dropped on the country and three million Vietnamese killed before the US military and its allies were finally driven out. The book says nothing about the millions of workers, students and youth in the US, Europe and Australia who protested against the war.

Similarly, the Afghanistan War is falsely described as a “war to stabilise the country and prevent Afghanistan becoming a training ground for Al Qaeda.” The war’s real objective, however, was to extend American hegemony over energy-rich and strategically vital Central Asian region.

Audacity highlights SAS commander Mark Donaldson who won the Victoria Cross in Afghanistan. While the Australian government insists that the SAS were involved in long-range reconnaissance, surveillance and raids on enemy targets in Afghanistan, these special forces were highly prized by the US military as assassination squads.

Significantly book says nothing about the Iraq War—a criminal invasion that killed hundreds of thousands of innocent Iraqi men, women and children. Audacity’s producers do not want to draw students’ attention to a war based on lies about weapons of mass destruction that was opposed by millions in people in the largest global anti-war demonstrations in history. 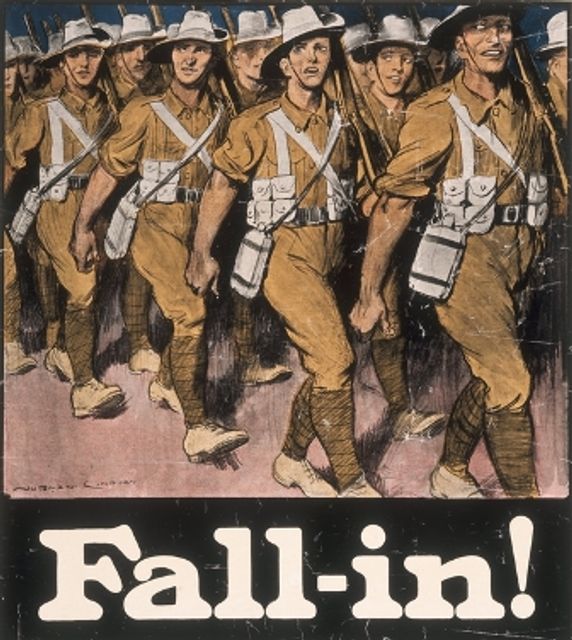 The government’s educational resources include Fall in!, one of several WWI recruitment posters designed by artist Norman Lindsay. It depicts a group of soldiers cheerfully marching off to war. Students are asked to “design their own recruitment poster, thinking about what message they want to portray and the best way to get the message across.”

Other posters feature high-profile sportsmen. One of them reads: “Footballers—be in the last quarter with the Sportsmen’s 1000.” Another published by the Win the War League in 1917 is headlined “It’s nice in the surf, but what about the men in the trenches. Go and Help.” 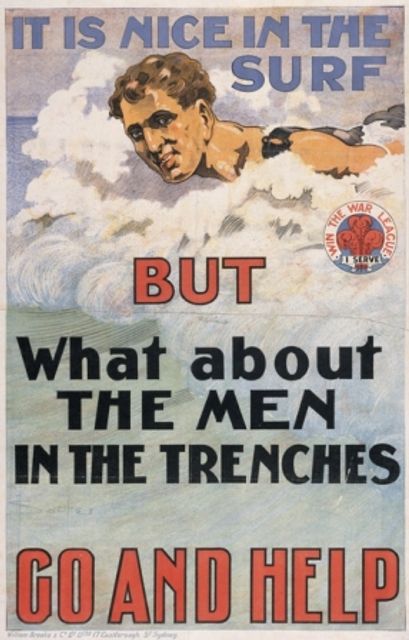 The government’s package, of course, does not include any of the anti-war posters produced by the International Workers of the World (IWW). The “educational resources” also fail to note that Australians, including those on the military frontline, stubbornly voted against conscription in government referenda in 1916 and 1917.

During WWI many teachers became virtual recruiting sergeants. Teachers displayed pro-enlistment posters and often schools became the local centres for recruitment drives. Stories and letters from the front were read to the children as part of the curriculum and patriotic songs learnt. Some schools even offered teachers career promotion if they enlisted. 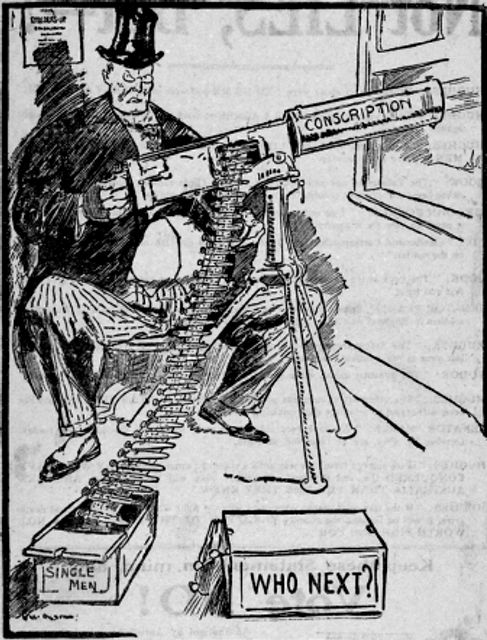 Veteran Affairs is currently running competitions and grants for schools and teachers who actively participate in the WWI centenary events. Financial prizes are available for schools that invite war veterans to provide “first-hand accounts and enhance students understanding of and appreciation for the unique nature of military service.” Grants are available for teachers and pre-service teachers to develop curriculum units focusing on Anzac Day and Remembrance Day.

The Australian War Memorial has also launched projects targeting young students. One project—the Roll of Honour Soundscape—involves primary school children recording the names and age at death of the 62,000 Australian soldiers killed in WWI. Another project involves thousands of children writing messages on wooden crosses to be placed at memorials and cemeteries across Europe in the next four years.

The government campaign, however, is not restricted to upper primary students. A program called “Cobbers Tales” has been designed for pre-school children—between three and five years old. This involves children wearing uniforms and playing with puppets and toys while listening to stories about “brave” animals in war such as “Sandy” the horse from the Australian Military Light Horse Brigade and “Saabi” a dog who went to Afghanistan.

There is only one reason why children are being targeted with this sort of militarist propaganda and that is to condition them to accept war as a normal part of life. This is a clear and chilling warning that the Australian political establishment is preparing to dragoon the next generation into new and even more violent imperialist conflicts.