The Nazi war of annihilation against the Soviet Union: Part one

Below is the first part of a two-part review of Nazi Policy on the Eastern Front, 1941: Total War, Genocide, and Radicalization, ed. by Alex J. Kay, Jeff Rutherford, David Stahel, Rochester University Press, 2012, 359 p. The second part of the review was posted January 13.

All quotations refer, unless otherwise indicated, to this book.

In 2012, Rochester University Press published an important volume on the policies of the Nazis in the occupied territories of the former Soviet Union. The book is comprised of eleven essays on different aspects of Germany’s war of annihilation against the Soviet Union—the most brutal war history has ever seen. The material presented sheds light on the historical background to the criminal policies currently being pursued by US and German imperialism in Ukraine and Eastern Europe.

Part 1: “Russia is to be reduced to the level of a nation of peasants, from which there is no return”

The Nazi war drive against the Soviet Union had two basic, interrelated aspects. First, “Operation Barbarossa” was a counterrevolutionary war aimed at dismembering the Soviet Union, reducing its republics to the status of colonies of the Third Reich, and reversing all the social and economic gains of the October Revolution. Despite the degeneration of the Soviet Union under the rule of the Stalinist bureaucracy, many achievements had, at least in part, been maintained and continued to serve as an inspiration to workers worldwide.

As one SS-Oberführer put it in the spring of 1941: “In Russia, all cities and cultural sites including the Kremlin, are to be razed to the ground; Russia is to be reduced to the level of a nation of peasants, from which there is no return.” [P. 108]

Second, control over the enormous resources of the Soviet Union—not only agricultural produce, but also oil (particularly in what is now Azerbaijan)—was considered necessary for fighting a war against the United States, Germany’s most important imperialist rival, for world hegemony. While not explained in Marxist terms, these driving motives are noted in the book. The essays focusing on food policy, in particular, show how these two objectives were interrelated.

German historian Adrian Wettstein writes: “The hunger strategy was part of the war of annihilation and aimed at the starvation of up to thirty million Soviets in the wooded regions of Belarus and northern Russia, as well as in the cities. Its success would supply continental Europe’s inhabitants with the foodstuffs they would otherwise have to import from overseas, making continental Europe—in other words, German-occupied Europe—immune from naval blockade, and thereby preparing the German sphere of control for the looming confrontation with the Anglo-Saxon powers.” [P. 62]

The Generalplan Ost [Master Plan East—the military strategy that served as the basis for “Operation Barbarossa”] envisaged the targeted starvation of some 30 million people in western and northwestern Russia. This policy would not only ensure food supplies for Germany’s war effort, but also create “Lebensraum” [living space] for an expansion of the Nazi empire. 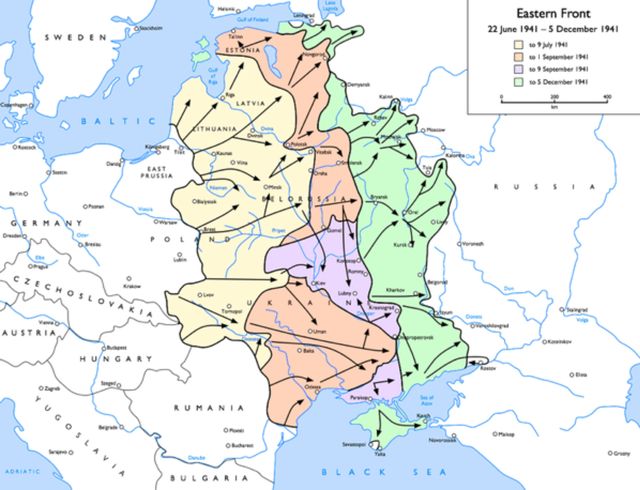 German Advancement on the Eastern Front in 1941

An essay by Alex J. Kay, author of an extensive study of Generalplan Ost, provides important material demonstrating that Nazi policy was primarily directed against the Soviet working class. He notes: “Coincidence or not, thirty million was the amount by which the Soviet population—exclusively the urban population—had grown between the beginning of World War I in 1914 and the beginning of World War II in 1939. According to the economic policy guidelines of May 23, it was ‘in particular the population of the cities’ that would ‘have to face the most terrible famine.’” [P. 112]

In this strategy, Ukraine occupied a key place. Herbert Backe, Reichsminister für Ernährung und Landwirtschaft (RMEL), one of the key planners of Operation Barbarossa, designated Ukraine as a “surplus” territory because it exported grain to other republics of the USSR—above all, the RSFSR (largely consistent with what is now the Russian Federation). 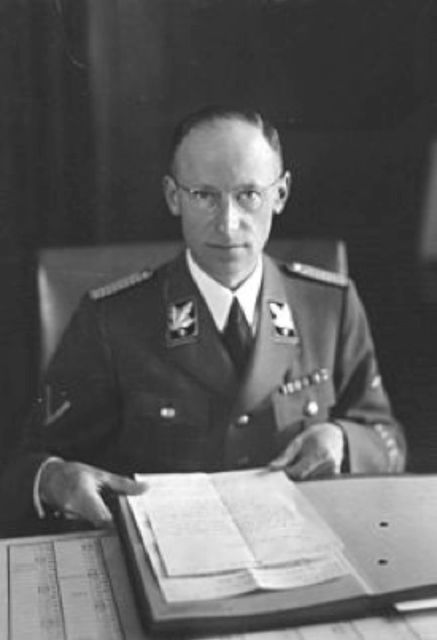 Occupied Ukraine, overrun by the Wehrmacht in the summer of 1941, was henceforth to produce solely for the requirements of the Third Reich and be cut off from the rest of the Soviet Union, leaving millions of people without necessary grain supplies. Ukraine was also considered a strategic asset as a major source of coal (in the Donets Basin), as a highly industrialized region, and as a bridge toward the Black Sea region.

A contribution in the volume by Jeff Rutherford focuses on the starvation policy in Pavlovsk, one of the suburbs of Leningrad that was besieged by the Germans for 900 days from autumn 1941 to early 1944. Cut off from grain supplies from Ukraine and unable to obtain food supplies from the surrounding countryside, the town’s inhabitants quickly faced devastating hunger.

Individual Wehrmacht soldiers living in the occupied city tried to help the starving population. However, any softening of the policy was vehemently opposed by the Army leadership.

The Reichenau order, named after Generalfeldmarschall Walther von Reichenau, said, “… What the Heimat [Homeland] has spared, what the command has brought to the front despite great difficulties, should not be given by the troops to the enemy, even when it comes from war booty. This is a necessary part of our supply.” [P. 138]

As the resistance of the Red Army grew toward the end of 1941 and the German Wehrmacht was unable to advance further to virgin soil regions, the acquisition of food stuffs from the population in occupied cities such as Pavlovsk became even more brutal.

Of the 11,000 inhabitants of the town (1939 census), 6,000 starved to death during the German occupation. Rutherford notes that the fate of Pavlovsk was “symptomatic of the general misery that accompanied German occupation.” [P. 146]

In addition to millions of civilians, some 3.3 million Soviet prisoners of war out of a total of 5.7 million captured died in captivity, mostly of starvation. Of those 3.3 million, 2 million died in the first seven months of the war, before the beginning of February 1942.

The starvation policy was linked to the systematic devastation of Soviet cities. With the assault on the USSR, urban warfare in World War II acquired new dimensions. In Western Europe, the only city to experience a siege by the Nazi army was Rotterdam (in May 1940). In Eastern Europe, urban warfare and the siege of cities—usually aimed, at least in part, at starving the population—were integral parts of the war.

The first Eastern European city to face Nazi urban warfare was Warsaw, where the Wehrmacht met unexpected resistance following its invasion on September 1, 1939. But even in comparison to the brutal sieges of Warsaw and Rotterdam, urban warfare in the Soviet Union was particularly violent. Here, there were no orders to avoid, at least to some extent, excessive cruelty against civilians.

With a population of 500,000 in 1939 (up from 100,000 in the 1920s), the city formed an important infrastructural and strategic nexus. It took the Wehrmacht much longer than expected to break the resistance of the Red Army and conquer the city.

In the course of the one month the German advance was delayed, important steps were taken to mobilize the Red Army and marshal economic resources for the defense of the Soviet Union. Nevertheless, the city of Dnipropetrovsk was entirely destroyed. It faced, as Wettstein notes, “one of the strongest concentrations of artillery during the entirety of Operation Barbarossa.”

A criminal war from beginning to end

Several essays in the book focus on the preparations for Operation Barbarossa. While presenting only some of the most important facts, they provide an unambiguous refutation of revisionist theories that seek to portray the crimes of the Nazis in the Soviet Union as a mere “reaction” to the violence of the Russian Revolution.

Most prominently, German historian Ernst Nolte argued in the 1980s that the crimes of the Nazis, and, in particular, Auschwitz, constituted a “fear-borne reaction to the acts of annihilation” triggered by the Russian Revolution. “The demonization of the Third Reich,” Nolte insisted, “is unacceptable.” [1] (See: “An attempt to rehabilitate Hitler”)

More recently, Professor Jörg Baberowski argued in the German magazine Der Spiegel that, unlike Stalin, “Hitler wasn’t vicious,” and that “historically speaking, he [Nolte] was right.”

In fact, Operation Barbarossa was from the beginning conceived of as a war of unrestrained plunder and colonial subjugation of the peoples of the Soviet Union. All basic tenets of international and military law were to be ignored. 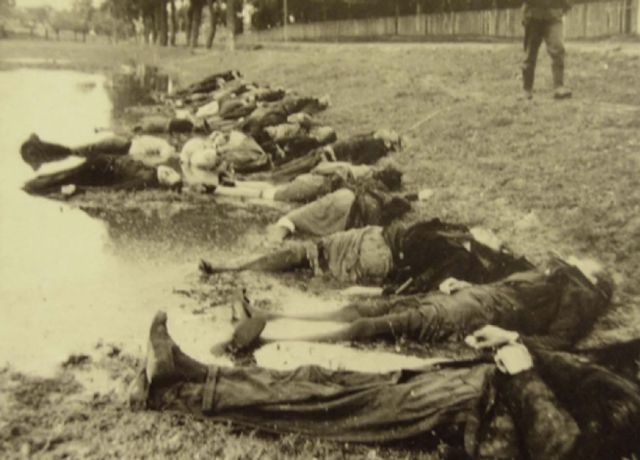 In his contribution, German historian Felix Römer focuses on the criminal orders issued by Hitler to the eastern Army on the eve of the assault on the Soviet Union. The most notorious was the “Commissar Order.” It said: “In this battle [against Bolshevism, CW] it would be a mistake to show mercy or respect for international law towards such elements… The barbaric, Asiatic fighting methods are originated by the political commissars… Therefore, when they are picked up in battle or resistance, they are, as a matter of principle, to be finished immediately with a weapon.” [2]

In post-war Germany, it was vehemently denied that these orders had ever been issued to the Wehrmacht in the east, let alone carried out. This changed only in the 1970s and 1980s.

Still, the extent of the Wehrmacht’s involvement in such crimes was either not researched or belittled. (See: “The debate in Germany over the crimes of Hitler’s Wehrmacht”). Felix Römer carried out the first comprehensive research on the Wehrmacht’s pursuit of Hitler’s criminal orders. He draws the following devastating conclusion:

“For almost all formations that fought on the Eastern Front, there is evidence of their adherence to the Commissar Order… As a rule, every time the external prerequisites were fulfilled and the units were actually in the position of having to apply the Commissar Order, they decided to do so.” [Pp. 88, 91] 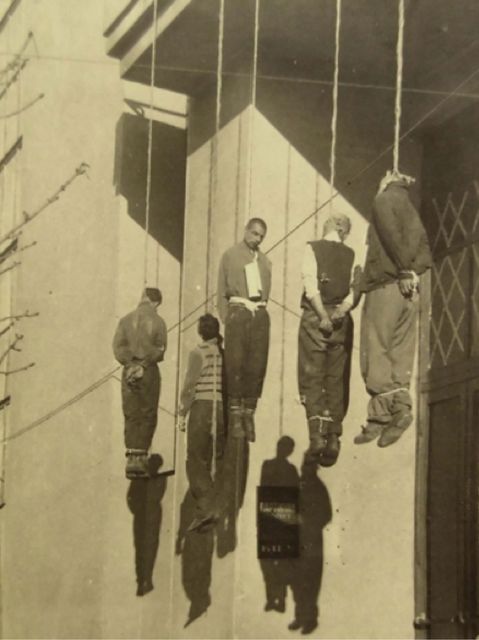 Ukraine, Kharkov, Civilians hanged by the Germans in retaliation for an attack on German headquarters, November 1941 [© Yad Vashem Photo Archive]

The total number of commissars who fell victim to murder by the Wehrmacht is difficult to establish. Römer cites a minimum figure of around 4,000, and adds that “[t]he actual number of victims must, however, be set much higher (…).” [P. 88]

The Commissar Order was eventually canceled in June 1942. Nazi generals were concerned over the fact that the order had strengthened the already enormous resistance of the Red Army and contributed to record-high German casualties.

The other criminal order analyzed by Römer, the Martial Jurisdiction Decree, issued on May 13, 1941, established that crimes committed by the Wehrmacht against the civilian population were not subject to the jurisdiction of military courts. In other words, Soviet civilians were declared fair game. Römer states that there is “hardly a division and no corps or army in whose records evidence of executions of Soviet civilians and real and alleged partisans without legal proceedings cannot be found.” [P. 84]

The total number of casualties among Soviet civilians has to this day not been definitively established, but is usually put at around 18 million out of a total of some 27 million people from the Soviet Union who died in the war.

[1] Ernst Nolte, “Between Historical Legend and Revisionism? The Third Reich in the Perspective of 1980,” in Forever in the Shadow of Hitler? Original Documents of the Historikerstreit, the controversy concerning the singularity of the Holocaust, Humanities Press, 1993, pp. 14, 15.

[2] Yitzhik Arad, Yisrael Gutman, Abraham Margaliot (eds.): Documents on the Holocaust: Selected Sources on the Destruction of the Jews of Germany and Austria, Poland, and the Soviet Union, Jerusalem/Oxford 1981, p. 376.