Important layers of workers and young people attended the Socialist Equality Party’s anti-war meetings yesterday in Sydney, Melbourne and Wellington in New Zealand in defiance of the barrage of militarist propaganda throughout the media and political establishment surrounding Anzac Day.

The SEP’s meetings entitled “Anzac Day, the glorification of militarism and the drive to World War III” were the only ones to challenge the quasi-religious atmosphere being whipped up over the centenary of Australian and New Zealand involvement in the failed Anglo-French invasion of Turkey in April 1915. Speakers at the meetings warned that the “celebrations” were part of preparations by the Australian ruling elite for participation in new and more terrible wars. 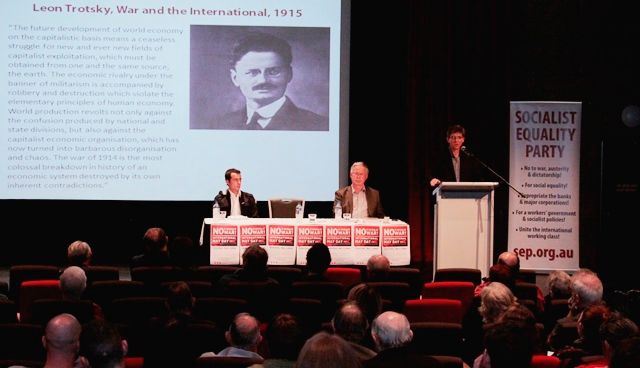 Welcoming everyone to the Sydney meeting, SEP National World Socialist Web Site editor Peter Symonds, declared: “Each of you, by your very attendance at this meeting, has taken a stand against the attempts to politically censor the SEP and its socialist and internationalist opposition to war and militarism.”

The Sydney meeting was only held after a concerted campaign by the SEP against attempts by Burwood City Council and Sydney University to prevent it from taking place. Many of those who attended had written passionate letters of protest demanding a reversal of the decisions by these institutions. They expressed their determination to participate in the meeting in order to defend the democratic rights of the SEP, and the working class, to hold it, as well as to gain a deeper understanding of the motivations behind the drive to war.

In both Sydney and Melbourne, WSWS readers attended from interstate. An important contingent of workers and young people made their way to the Sydney meeting from the Central Coast, despite the difficulties they encountered after their homes were ravaged during the previous week by violent cyclonic winds and rain.

Greetings from the leaders of the US, German, Sri Lankan and British sections of the International Committee of the Fourth International (ICFI) were read out to all three meetings, underscoring the international character of the SEP’s campaign against political censorship.

In his greetings, Chris Marsden, SEP (UK) national secretary addressed the significance of the decision taken by the audience members to attend. “The stand that you have taken is an initial indication of the mass opposition to imperialist militarism and war that must and will emerge in every country, which the ICFI alone seeks to give conscious expression. You are the first among many and you have found your political home.”

Audience members carefully followed the detailed reports and power-point presentations made by the SEP speakers—James Cogan and Oscar Grenfell in Sydney, Nick Beams and Will Morrow in Melbourne, and Tom Peters in Wellington.

Oscar Grenfell, member of the IYSSE and SEP national committee, warned that the World War I centenary was being used to condition the public, especially young people, for new imperialist wars. He outlined the ways in which hundreds of millions of dollars were being lavished on countless events by every level of government and every major institution to promote militarism and war. 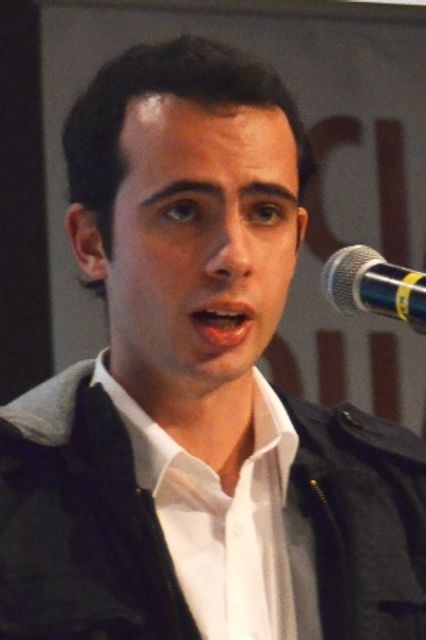 “The most ominous nature of the centenary campaign,” Grenfell said, “is its central focus on the youth. Elaborate events are being held at campuses across the country, as universities are once again being transformed into centres of militarism.”

He pointed out that primary school children were being instructed to identify with some of the teenagers of 100 years ago who were sent to the slaughter of WWI. The children were being “matched up” with soldiers of the same name—with one student “matched” with a 14 year old, the youngest “volunteer” to die in the Gallipoli campaign.

SEP national secretary James Cogan began by pointing out that the extraordinary resources that had been devoted to Anzac Day appeared shocking to people outside the country. “Even for those of us who have lived here our entire lives, the events of yesterday had a bizarre character,” he said.

“By 1975, for example 40 years ago, commemorating Anzac Day was considered so distasteful, including by large numbers of WWI veterans, and hundreds of thousands of WWII Korean and Vietnam veterans, that services and marches had their lowest-ever attendance. Reflecting popular attitudes, the Australian newspaper of April 26, 1975 reported on the entire Anzac Day activities around the country in a single column news article.”

Cogan said that today, Anzac Day was being promoted and war glorified under conditions where the Australian ruling elite, confronted with another “intractable economic breakdown of capitalism as a world system,” was at the centre of “reckless preparations by its US ally—a power in economic decline and wracked by internal crises—for a military confrontation with China over dominance in Asia.

“The relationship between the falsification of the past and the contemporary agenda of the ruling class is borne out by the character of the staggering historical lies that have become central to the commemorations of the World War I centenary,” he said.

Cogan exposed the predatory aims of the British Empire, contrary to the myths that Britain, Australia and New Zealand did not want war. He cited a famous British Foreign Office memorandum of 1907, making clear that whether Germany had hostile intentions towards Britain, or whether it would expand its influence through peaceful economic means, “its rise was a threat and had to be prevented, so therefore war was inevitable.”

Reviewing the predatory ambitions of Australian imperialism and its preoccupation with seizing German colonies in New Guinea and the Pacific, he explained that “World War I was an imperialist war—that is, it was a war fought on all sides for resources, markets and profit, a war of rival capitalist nation states over dominance within an interdependent world economy. 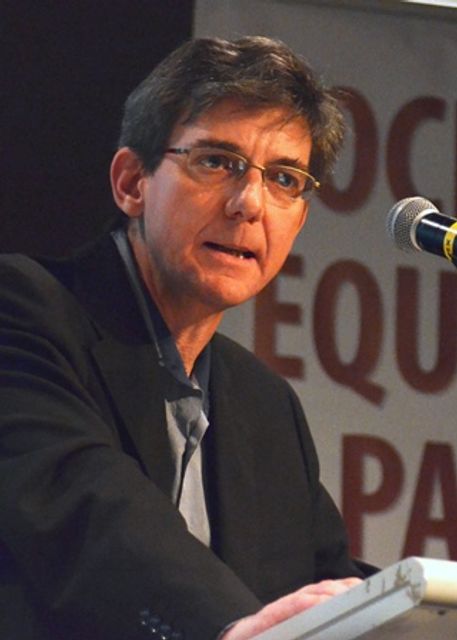 However, the war and the deaths of millions were not inevitable. They were only made possible by the betrayal of the leadership of the Second International, which sided with its own capitalist class and dragged the working class into the slaughter.

“The war was only opposed from a socialist and internationalist standpoint by the Bolshevik Party in Russia, and a handful of revolutionists in other countries,” Cogan said.

The perspective advanced by Lenin and Trotsky for the overthrow of capitalism and the conquest of political power by the working class, and the establishment of a new Communist International, provided the only way forward for the Russian and international working class, the speaker stated.

“The Russian Revolution transformed the world political situation, opening a road forward for the working class and oppressed masses in every part of the globe. Everywhere, the best elements of the anti-war and anti-colonial opposition politically turned toward Bolshevism and Communism—toward a genuine revolutionary, socialist and internationalist perspective,”

It was the seizure of power by the working class in Russia, the speaker said, and the fear of socialist revolutions within the ruling classes throughout Europe and internationally that brought WWI to an end in 1918.

In the immediate aftermath of the war, revolutionary opportunities opened up throughout Europe, Cogan pointed out, but then quoted Leon Trotsky, who explained that “After the war the proletariat was in such a mood that one could have led it into decisive battle. But there was nobody to lead and nobody to organise this battle—there was no party… Insofar as there was no party, victory was impossible. And, on the other hand, one could not maintain the revolutionary fervour of the proletariat while a party was being created.”

Cogan then reviewed the strategic political experiences of the working class in the 1920s and 1930s—the struggle waged by Trotsky and the Left Opposition against the Stalinist bureaucracy in the Soviet Union, and the formation of the Fourth International in 1938 to ensure the continuity of the struggle for the world socialist revolution.

Today, the speaker warned, the stage was being set for a new military catastrophe. He reviewed the dangers posed by US provocations against Russia over Ukraine, and Washington’s pivot to Asia, aimed at militarily encircling China.

“The strategic task today is to build the ICFI, the direct continuity of the Fourth International established by Trotsky and the fight for socialist internationalism led by Lenin in 1915, which laid the basis for the Russian Revolution.” This involved, he said, a relentless struggle, to expose and demarcate the interests of the working class from all those political forces that defended the failed capitalist order, including Labor, the Greens and “the pseudo-left organisations, whose perspective has been summed up by their counterpart in Greece, Syriza, which has declared as its aim to ‘save capitalism from itself.’

“The attack launched on our party over the past two weeks is a warning of just how sharp the political situation is becoming… The fact that not one organisation claiming to defend democratic rights raised a protest over the SEP’s treatment testifies to the fact that there is no constituency for democratic rights in the official political establishment.”

Cogan concluded by appealing for all those in attendance to participate in the ICFI’s International May Day next week and to apply to join the SEP.

The reports opened up important questions in all three meetings, indicating that those in attendance had carefully followed the speakers and wanted to learn more.

At the Melbourne meetings, one questioner asked where all the “patriotic fervour” was leading Australia. SEP National Committee member Nick Beams responded by saying that it was important not to “be bedazzled” by the official events, noting the cancellation of the “Camp Gallipoli” event in New Zealand due to low ticket sales and the flop of Channel 9’s television drama miniseries Gallipoli .

“What attracts a young person to this mythology of Anzac? That there is some higher purpose in life; that the Anzacs fought for something beyond themselves; that they weren’t just selfish individuals… This is a perverted attempt to appeal to the idealism of youth,” he explained.

“What the ruling classes assiduously play on and seek to promote for their own purposes is the idealism of youth. Well, our movement’s waging another fight. We are seeking to mobilise the idealism of youth for a better future—based on reality, not myths and legends. That can only be done through a political struggle, to explain the real nature of the war, and what really happened.”

Many of those who attended expressed their appreciation for the reports and discussion, and several indicated their eagerness to join the SEP. Collections for the party’s $10,000 Special Development Fund in Sydney and Melbourne raised more than $8,500. After the formal part of the meetings closed, dozens of participants stayed back for informal discussion and to review and purchase Marxist literature.