Vote “No” on Detroit Federation of Teachers’ contract!

The Socialist Equality Party and the WSWS Teacher Newsletter call on Detroit teachers to reject the contract presented by the Detroit Federation of Teachers (DFT). The DFT and its parent union, the American Federation of Teachers, are working closely with the Detroit Public Schools and the political establishment to do whatever they can to prevent a struggle by teachers in defense of their conditions and public education as a whole.

The tentative six-month-to-one-year contract, the “highlights” of which were unveiled last week, is an insult to teachers. Amidst a frontal assault on public education nationally, the unions are demanding that teachers accept low pay, overcrowded classrooms, unsafe/unhealthy buildings and more school closures.

The union executives are determined to prevent the outbreak of a struggle that would draw attention to the anti-education policies of the Obama administration or disrupt their campaign for the election of Hillary Clinton. They are particularly worried about the explosive consequences of a fight by Detroit teachers, who demonstrated their readiness to fight in defiance of the union repeatedly over the course of the last year.

The attempt by the DFT/AFT leaders to package this rotten deal as a “no concessions” contract is a lie. Teachers will still not receive repayment for their mandatory interest-free Termination Incentive Plan “loans” of $10,000 to the former Detroit Public Schools district. Their step increases will continue to be frozen, unless Detroit workers can be blackmailed into agreeing to pay higher taxes, along the lines of a similar scheme backed by the Cleveland Teachers Union.

Nor were teachers impressed as interim president Ivy Bailey dangled the prospect of miserly bonuses—which she claimed was “real money”—in front of them. The payouts will be less than $2,000, for those that qualify, and entirely eaten up by the yet-to-be-negotiated giveaways on health care and the cost of union dues. Such calculations do not even include the hundreds of dollars that educators routinely contribute annually out of their own pockets for classroom supplies or to help children in need.

Instead of catching up to pay levels from a decade ago, the contract provides that some teachers can work harder—taking on an additional class—for a productivity “bonus,” and some will qualify for a federally-funding “merit” award of $1,000. None of these measures constitute real pay increases.

Even more critically, the tentative contract accepts the dictatorial financial framework which is being used to destroy public education in the city of Detroit. Behind the emergency manager and the Financial Review Commission (FRC) stand the policies of both the state and federal government insisting on charter schools, merit pay and privatization. The FRC, the courts and the attorney general can revoke, renege or renegotiate anything in the contract. 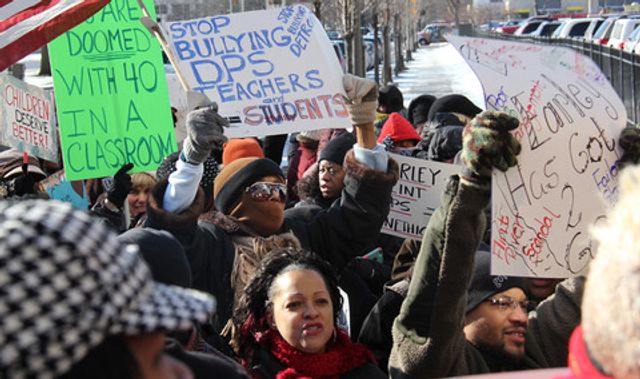 A rally of Detroit teachers

Teachers must mobilize for a fight back, but this immediately raises critical political issues. A strike would bring the full force of the courts and government to bear upon workers. All of these state agencies have made clear their determination to criminalize the struggles of educators and to implement privatization policies in line with those of the Obama administration and both big business parties.

Teachers stand at a crossroads. Detroit and the fate of its public schools are a test case nationally. It is necessary to make a political evaluation of the past year’s sickouts, the role of the DFT/AFT, the intervention of the state and federal governments, and the policies of the Democrats and Republicans. Only with a new perspective can teachers show a way forward and mobilize the full power of the working class in the defense of public education.

In this struggle, the “unions” stand on the opposite side of the barricades. The DFT/AFT is a business, run by well-heeled operatives like AFT President Randi Weingarten, who brings home more than a half million dollars a year. In collaboration with emergency managers and local and state governments, the DFT has worked to suppress the struggle of Detroit educators, forcing through unprecedented cuts in pay, gargantuan “loans” to the District and cuts in health care.

The DFT/AFT actively opposed the courageous campaign of sickouts independently organized by teachers last year. Weingarten, Bailey et al. deliberately sought to cut teachers off from their allies among workers and students, using racial politics and a demagogic appeal to “local control” to confuse and divide workers.

This was capped off with the DFT/AFT’s support to Governor Snyder’s plan to dissolve the 174-year old public school system and replace it with one more conducive to privatization. The reorganization legislation included provisions to strengthen the anti-strike provisions of Michigan employment law. Far from opposing this legal bludgeon, the DFT welcomed it, anticipating that it could be used to threaten the militant rank-and-file the next time they mounted an independent struggle.

These reactionary policies in turn have emboldened the ruling class. Michigan Senate Majority Leader Arlan Meekhof and Speaker of the House Kevin Cotter are now asserting the state’s right to close those DPSCD schools on the “priority” list at the end of this  school year. This could mean up the closure of 47 schools, nearly half of the district! 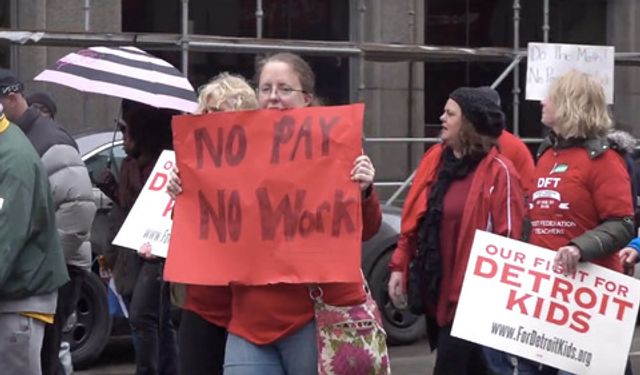 Teachers cannot allow their struggle to be subordinated to either the Democratic Party or the Republicans. There has been no other administration that has done more to promote charter schools, penalize educators and encourage the growth of the privatization than Obama’s, and Clinton will only escalate the attack.

The Obama administration directly intervened on behalf of the Snyder legislation to dissolve the Detroit Public Schools, with Education Secretary John B. King demanding quick passage. The response of the AFT? To organize charter schools and keep their dues base up. The AFT/DFT have concluded a dirty deal in Detroit, well aware that their “seat at the table” depends on devoting their full-time energies to electing Democratic Party functionaries.

As for the Republicans, Donald Trump’s $20 billion block grant proposal to defund education will result, according to Weingarten, in the loss of 300,000 jobs. Yet this is virtually the same number of education jobs that have already been eliminated under the Obama administration, with the AFT’s collaboration.

In order to mobilize the strength of the working class behind educators and children, teachers must break with the two parties controlled by the financial elite and begin organizing independent rank-and-file committees to defend public education on a socialist program.

Such rank-and-file committees must take the initiative to mobilize the Detroit-area working class—including autoworkers and city workers victimized in the state-orchestrated “Grand Bargain”—in defense of public education, jobs and social services.

Billions of dollars must be poured into the education system. Instead of “overhauling the nation’s nuclear weapons” as war hawk Hillary Clinton is advocating, those funds must be used to begin the construction of new schools, provide good wages and benefits to all school workers, and make all education, from pre-K through advanced degrees, free and available to all.

Public education is not compatible with a society in which all decisions are based on the increasingly rapacious and militaristic interests of a parasitic caste of financiers. It is capitalism that must go, not public education.